A Brief Rundown of The Goofiest Cards & Mechanics in Magic: The Gathering - Nerdist

A Brief Rundown of The Goofiest Cards & Mechanics in Magic: The Gathering

Magic: The Gathering is just a juggernaut when it comes to games. It’s been around for an exceptionally long time and has plenty of opportunities to do some off the walls stuff. As a huge fan of good stories and having a laugh, I wanted to showcase a collection of the silliest things Magic has decided to create or have been done.  There’s no particular order to what is or is not the funniest and you won’t be able to play these cards in some of the Standard formats. That would just make too much sense and give you more of a reason to disagree over laughing. So laugh, darn you, laugh! 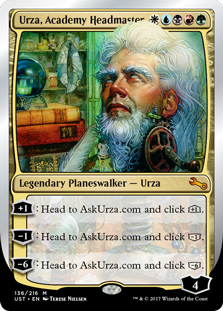 All of the Un-Sets are off the walls bonkers. They are silver bordered and just plain comical. The Un-Sets have been a way for Wizards of the Coast to poke fun at themselves and to make interesting sets. Sadly, there are just way too many cards in the Un-Sets to list to really do it justice, but the card above gives you a pretty good idea of the kind of silliness they embody. As a side note, they have also produced some of the most beautiful full art lands around. They don’t even have blocked borders! I loved the original Zendikar full art lands and the newer ones, but these lands are simply stunning. 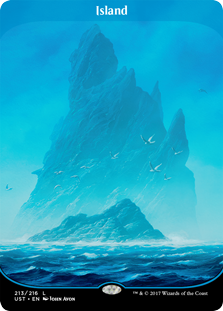 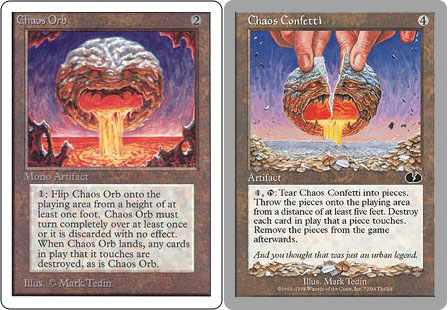 Sometimes it’s a singular card that makes for the whole joke. At a time before the card was banned, this card required the physical action of flipping it so that it would work. In the finals of a particular tournament, one player realized their only way to win would be to use Chaos Orb…and shred it into tons of pieces so that it fell all over their opponent’s cards. (Talk about rules lawyering.) It is believed this event is what caused this and similar cards to be banned. Given that there is an Un-card (see above) of it called Chaos Confetti I am inclined to believe this is true. 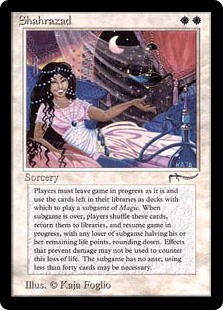 Yet another legal card that does something a little off the wall. Here you have a card that basically says “Play another game of magic using the cards you have left. Reset back to where you were and whoever losing halving their remaining life.” It also mentions Ante which is gone, but was something that actually had you betting cards. This would seem like blasphemy at this point, but that wasn’t the intention back then. It was just meant to be fun and what’s more fun than telling a story within a story? Inception! No. Wait. It’s just about having fun.

Banding was a keyword that was introduced at the beginning of the game and did different things depending on if a creature was attacking or defending. I put it into the goofy category because there hasn’t been a time I haven’t heard someone refer to it in a comical manner. Turns out that it was pretty confusing to have a 1-word ability on a card that could do different things. Since then, Wizards of the Coast has stuck to a selection of Keywords or ensuring the ability is explained on the card. 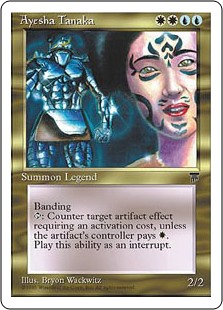 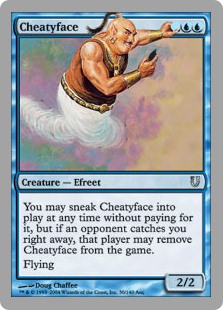 Cheatyface, you rapscallion, you! Even though Cheatyface is an Un-Card, it deserves its own section in my heart.

From a story originally posted on Reddit, a group of friends was playing a game of Commander after having discussed the ban list and what cards could be legal and so forth. One player is playing a control deck and just biding their time without playing any cards people think to be useful. They’re all playing with some form of proxy cards (stand-ins or printed, unofficial copies), but this one player’s deck is completely proxied. Even the lands.

He eventually taps everyone else’s’ cards and they have no idea how he plans to win. That is until the control player starts unsleeving their cards and revealing one Cheatyface after another tucked behind the sleeves of paper. Every. Single. Card. An army of Cheatyfaces attack and win! I can only imagine the surprise and laughter brought on by this kind of event. The amount of preparation required is pretty staggering, to say the least.

This is by no means a comprehensive list of the goofiest things in Magic, and if you think there’s goofier, tell us in the comments below! And be sure to tune into our Magic: The Gathering show Spellslingers (with equally goofy gag reels) every week here on Geek & Sundry.


Image Credits: Wizards of the Coast