While some of the rules regarding them change based on what game or story they are in, liches are one of the most widely used monsters in all of fantasy. You see them in games like D&D and WoW–Frostmourne, anyone?–as well as in shows like Adventure Time and countless fantasy novels.

You could even make the argument that Voldemort fits the lich-bill, but where did this widespread idea originate? Well, to answer that, we need to trace them back through the annals of pop culture to identify who first concocted the idea of a lich in the first place.

Before we get to that, though, it’s important to set the stage and explain exactly what we mean when we talk about liches in general.

According to one of the most popular definitions, liches are undead wizards who used their mighty powers to escape the afterlife in pursuit of more power, allowing them walk around among the living as magical maniacs in search of forgotten knowledge, riches, and magically infused objects. They’re even sometimes good guys, which means you shouldn’t judge a lich by its cover, especially because that cover’s usually horrifying.

On the surface, liches often look like zombies. Their skin, pulled tightly around their frames, gives them a leathery appearance. Their fiery–yet empty–eye sockets peer out over tattered robes and damaged jewelry, looking for the next adventurer to bother. Sometimes, but not always, there is a frostiness to them, like this: 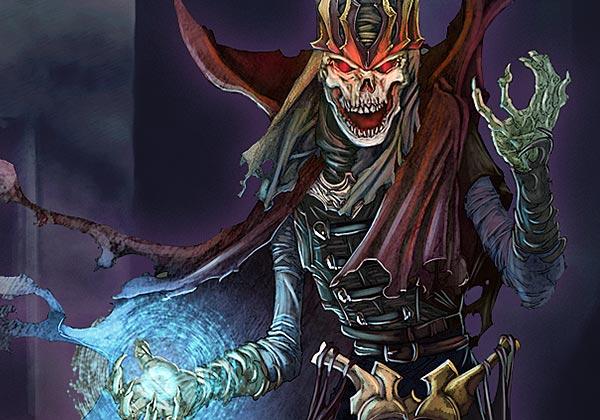 While this general idea of a lich is pretty much universal in many forms of fantasy, liches really took off in modern gaming and fiction when D&D co-creator Gary Gygax officially added it to the game back in 1975 in the supplement called Greyhawk. Gygax wasn’t the first person to conceive the idea of a lich, though. Instead, he lifted most of the idea from a short story from the late-1960s by fantasy author Gardner Fox. If that name sounds a bit familiar, it’s because Fox was also the guy who helped create The Flash, Hawkman, and was even one of the first Batman writers.

While his work in comics gained him notoriety, Fox was also a pulp fantasy author. In 1969, Fox published a collection of stories called Kothar: Barbarian Swordsman, which followed the many quests of a barbarian named, you probably guess it, Kothar. One of these stories was called “The Sword of the Sorcerer,” and this is where Gygax got the inspiration for his now famous lich monster. He even stated so in a forum post a few years back, saying that he was friends with Fox and his family.

In the story, Kothar explores a lost tomb that is home to a powerful lich named Afgorkon, who has been sitting in wait for a hero to venture into his home. Afgorkon ends up sending Kothar on a quest to kill a witch, giving him a sword called Frostfire to help him along the way. He also promises that Kothar can keep the mighty sword once the deed in done with the caveat that Kothar will also have to give up all other wealth. Kothar agrees and an adventure blossoms.

After reading this tale, Gygax adapted Fox’s character into the lich we known today in D&D. In a way, this means that Fox is the real creator of the lich because his notion of them is the one that we would most recognize.

That doesn’t mean, however, that he was the very first person to use the term. Back in the 1930s, H.P. Lovecraft mentioned a lich in The Thing on the Doorstep, though his version was a corpse that was possessed by a wizard instead of a wizard who became undead, meaning that it was more a body switching magical power than a way to actually defeat death. If you look all the way back as far as you can, the term “lychgate” has been used for centuries to describe the covered entrance to a church’s graveyard with the word “lych” meaning corpse. It was common back in those days for bodies to be left at the lychgate before the funeral and burial took place under the lychgate’s covering.

Over the years, “lych” changed to “lich” and lychgates slowly gave way to mortuaries and funeral homes. In the 1900s, lich became synonymous with the monsters we all know today after Fox’s story led to the ‘Gygaxian’ adaptation, which has since evolved in many other fantasy stories and games.

And there you have it. Thanks to a pulp fantasy story from 1969, the modern games and stories we love to dive into have liches running around trying to obtain ultimate power.

If you want us to do a deep dive on your favorite monsters or items from D&D and beyond, drop us a comment below and we’ll see what we can find.

The Forgotten Origins of D&D’s Alignments and Paladin...

Kick Up Your Lego Game By Building Things on The Walls With ...

Kingsway: An RPG Set In Your Windows 95 Desktop (From Hell)