9 TV Characters Who Got Killed Off Unceremoniously

After the slightly abrupt, strange, and utterly confusing fake “death” of Rick Grimes in The Walking Dead, we’ve been thinking about all of the best, weirdest, and most unceremonious TV deaths of all time. From production dramas that led to last minute kills to children who went upstairs never to return, we’ve looked back on decades of television history to select nine of the best for your viewing pleasure.

The First Doctor – Doctor Who

William Hartnell’s reign as the original Doctor went for an astonishing 134 episodes between 1963 and 1966. But after three years and multiple conflicts with the crew and production, the BBC decided to replace him. The first plan would have seen the Doctor’s recasting dealt with after an interaction with the Celestial Toymaker, but what ended up happening would change the shape of the show forever. The creative team invented the Regeneration process which gave the series a decades long way to continue the story. Hartnell spoke about his sadness at leaving the part but was supportive of his replacement Patrick Troughton.

Denise Crosby made Star Trek history as the first cast member who asked to leave the beloved sci-fi show after she decided to quit just before the end of the first season. She thought her character Tasha Yar would have a more central role to the plot, and after clashing with cast and crew, Crosby left The Next Generation, leaving Yar to be unceremoniously shot and killed by an alien in “Skin of Evil.”

Judy from Family Matters wasn’t technically killed off, but her disappearance from the wildly popular sitcom is one of the creepier instances of a character being written off a show. Jaimee Foxworth brought to life the youngest Winslow sibling for the first three and a half seasons of the show, but after the runaway success of Steve Urkel–who became like a new child for the family–the production decided that the family only needed two kids. Though urban legend has it that she was sent upstairs never to come down again, we see her in the episode “Mamaâ€™s Wedding,” included in the family nuptials but after that she disappears with no explanation, never to be spoken of again. So we guess family doesn’t matter that much.

After Dan Stevens decided not to renew his contract for Downton Abbey the head honchos were left struggling with a way to create a convincing exit for the heir to Downton that didn’t destroy the credibility of the beloved relationship they’d created with his wife Lady Mary. Sadly for fans of the show–and good storytelling–that meant killing off Crawley during a celebratory drive he chose to go on straight after the birth of his new child. It probably didn’t help that this all happened during the Christmas special of the usually tame show.

We’re sure we’ll get slack for this one, as it was directly from the source comics, but that’s actually one of the worst parts of this horrible and unnecessary death. The Walking Dead had strayed massively from the source material over the years, and mere months after doing a fake out death for fan fave Glenn the show decided to kill him for real. It was a brutal and insensitive sequence that was exploitative to the point of parody, destroying one of the last great relationships that the show had.

At its best,Â The SimpsonsÂ transcends the tropes that they’re playing with, which is just what they did with the iconic episode “The Itchy & Scratchy & Poochie Show.” When execs became worried that the Itchy & Scratchy show is becoming irrelevant, they introduce a hip new character who they inevitably have to write off. Luckily for us and Poochie, the ending is an iconic and perfect riff on the topic of our list as he gets half-heartedly killed off on “the way back to his home planet.”

There has obviously been a more recent death in the world of Roseanne, but by all accounts it’s been handled really well, unlike this ridiculous reveal which brought about the end of the original series. At the end of the ninth season after the family won the lottery, the show utilized one of the all time corniest TV tropes after revealing that the entire season was actually based on a book that Roseanne had dreamed up after Dan died at Darlene’s wedding. Not only did they kill off one of the most popular characters, but they also pulled a Dallas classic with an “it was all a dream” finale.

Charmed was a huge hit by the time the third season began, but behind the scenes there was enough chaos and confusion that Shannen Doherty’s character Prue was written out of the show during a two-part season finale. “All Hell Breaks Loose” has become famous as the second part of the finale was never repeated or re-released, making the departure of Prue even more confusing. After being thrown into a wall by a demon, Prue “dies” and is never seen again, though is occasionally mentioned in later seasons. 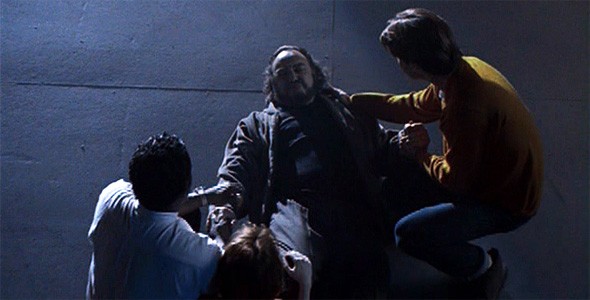 Sliders was a beloved, stone cold sci-fi adventure classic, but during the production of the season three there was a creative overhaul, leaving one of the stars, John Rhys-Davies, unhappy with the show. After agreeing to leave, Rhys-Davies’ character was killed off during the episode “The Exodus: Part Two” getting shot by a guest character and taking a slow motion bullet to save Jerry O’Connell’s Quinn.

Do you have a favorite untimely death that we missed? Still wondering what happened to little Judy after she scampered up those stairs? Let us know below!