For nearly a decade now, Archer has been the smartest comedy on TV. You might not think so between its choking sex robots, holographic anime brides, rampant alcoholism, and often ineffective spy craft, but hidden within its hilariously over-the-top antics are some of the smartest, weirdest, and most obscure references you’ll find in any piece of television. In honor of Archer: Danger Island’s season finale and given that it is the show’s ninth season, today’s episode of The Dan Cave is showcasing 9 of the most obscure references in the history of Archer.

One of Archer’s best literary deep cuts is from way back in the season one episode “Skorpio.” When the corpulent arms dealer Spirodon Skorpio commands Archer to bring chocolate to a threesome with him and Lana, the superspy replies plainly, “I would prefer not to.” If this simple line induced a flashback to high school English class, it’s because that’s the infamous catchphrase of the title character in Herman Melville’s Bartleby the Scrivener, who would say the same thing when asked to do any number of unsavory tasks. Then again no one asked Bartleby about a chocolate threesome…but who can say if that would have changed his tune?

The Destruction of Sennacherib Not only is Pam Poovey handy with a dolphin puppet in resolving interpersonal conflicts, but she can beat the ever-loving crap out of you too. Even more intimidating than her hand-to-hand combat skills is that fact that she has the third stanza of Lord Byron’s poem “The Destruction of Sennacherib” tattooed on her back. Most people opt for, like, two dragons smooching, or a glorious phoenix, or the Monster Energy drink logo, but not Pam! As we learn in season two’s “El Secuestro,” she prefers a poem about an Assyrian king trying to capture Jerusalem. What? Were you expecting Don Juan? How pedestrian.

Sinners in the Hands of an Angry God 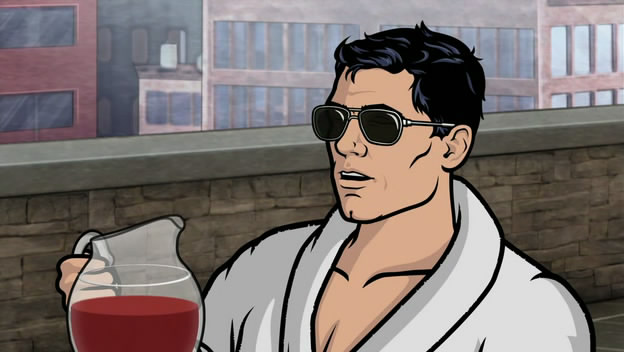 When Archer was so unspeakably hungover in season three’s “Crossing Over” that he needed an entire pitcher of Bloody Marys to make his head stop pounding, he was perhaps at his most relatable. But unlike the majority of us when we’re hungover, Archer had the wherewithal to quote a sermon from 1741 by British theologian Jonathan Edwards. Personally speaking, I prefer Archer’s prayer, mainly because a gigantic pitcher of Bloody Marys is my platonic ideal of a Great Awakening.

The Sirens of Titan Remember in season four when Archer had to travel to Morocco to help extract a secret agent…only to find out that he was a dog? Well that dog, Kazak the English mastiff, is a certified purebreed in terms of literary credentials: he is named in honor of Kazak, the spacefaring dog from Kurt Vonnegut’s novel The Sirens of Titan. Someone must have double dog dared Adam Reed and Mike Arnold to make double the obscure dog references because the episode title itself— ”Un Chien Tangerine”, which means “A Tangerine Dog”—is a reference to surrealist filmmaker Luis Bunuel’s 1929 short film  Un Chien Andalou, which means “An Andalusian Dog.” Thankfully, though, this episode contains far fewer instances of razor blades slicing into human eyeballs because YIKES. One of Archer’s most delightful deep cuts happens in the show’s very first episode, Archer tells Mallory that “Johnny Bench called,” then trails off. Johnny Bench is a Hall of Fame catcher who played for the Cincinnati Reds and has famously large fingers, which allowed him to hold up to seven baseballs at once. The implication is that Archer’s next line would be “He wants his mitt back,” which is to suggest that his mother’s ladyparts are akin to a gigantic, well-worn catcher’s mitt. It also paved the way for Archer to refer to Lana’s “Johnny Benchian fingers” a few episodes later. It’s also just straight-up gross. In the season seven episode “The Handoff,” Cheryl wants to burn a cashier’s check, but Cyril wards her off, noting that it could have fingerprints on it. In response, Cheryl shoots back, “Well who am I? Alphonse Bertillon?” You’d be forgiven if that sailed over your head. Bertillon was a 19th century French police officer who created a technique known as anthropometry, which was the first scientific system of identifying criminals based on their physical measurements. It was later replaced by fingerprinting. He also invented the mugshot, something I’m sure that 95 percent of the Archer gang has in spades. One of Archer’s sneakiest references is hiding in plain sight: Archer’s trusty, mistreated, heroin-and-jazz-addled butler, Woodhouse. His name is a sly reference to a series of stories by English author P.G. Woodhouse, about a highly capable valet named Jeeves, who serves an incredibly wealthy man named Wooster. In these stories, Jeeves has to rescue Wooster from putting his foot in his mouth at every conceivable turn, much like Woodhouse must help Archer out from all manner of unsavory situations. Except unlike Jeeves, Woodhouse stands an exponentially higher risk of getting straight-up murdered. How would you like to be remembered when you die? Something tells me that French novelist and journalist Emile Zola didn’t anticipate being turned into a hamburger pun. Yet that’s exactly what happened to the literary giant in season four’s “Fugue and Riffs.” Believing himself to be Bob Belcher, Archer devises a deliciously cheesy Emile Gorgonzola burger served with “J’accusecumbers,” the topping being a reference to Zola’s famous 1898 letter “J’accuse,” which he published to accuse the French government of anti-Semitism in the wake of unlawfully imprisoning Alfred Dreyfus. The only thing we could accuse Archer of here is thinking that gorgonzola and cucumber is a winning burger combination. 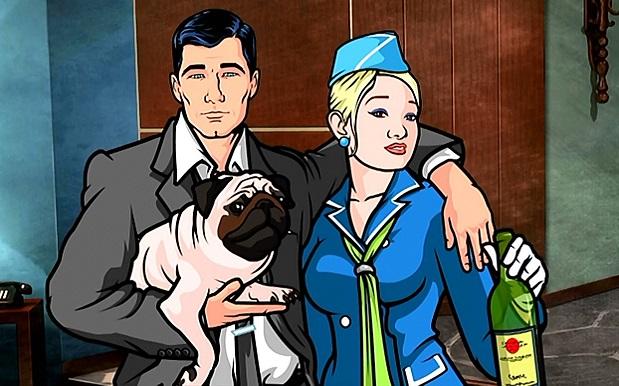 Her dog, Abelard, is named for a medieval French philosopher who dedicated his life to studying Greek thinkers. According to redditor jrhooo, this joke goes even deeper. Abelard famously had a romance with a younger working class woman named Heloise d’Argenteuil. Much like Heloise, this flight attendant is a younger working class woman who loves her Abelard. But wait, there’s more still! Not only was Heloise a scholar in her own right but, she was fluent in Greek. And thus, much like life, it all comes back to butt stuff.

And those are some of the most obscure references in Archer’s storied history! Which one is your favorite? What would you add to this list? Let me know in the comments below.

Add some anime to your life!