This weekend we finally get to see Captain America: Civil War,  the movie that promises to have one of the best hero-on-hero fights ever put to screen. Yes, I see you, Batman V Superman. I know what I said. Sit down.

Of course Civil War is based on a story from the comics, a universe where heroes fighting each other is just how you say “hello.” If you haven’t read it, Civil War, written by Mark Millar, is one of the best story arcs in recent Marvel history and it’s also beautifully drawn by Steve McNiven.  It is just an all around great book. So, what’s going to be different between the page and the screen? In short: lots… but today, let’s just take a look at five highlights from the comics that probably won’t make it on screen.

Oh, and SPOILER WARNING: for the books, not the movie. I have not seen the movie as of the time I write this so anything movie related here is all conjecture, so yeah, book spoilers not movie spoilers. You’ve been warned. 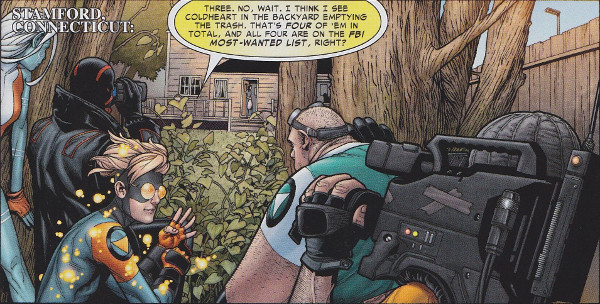 Both the film and the comic deal with the idea of a Superhero Registration Act (called the Sokovia Accords in the movie) and both will have some major event (or series of events) that makes world governments feel like super powered people should probably at least have a laminated ID card.

The Stamford incident occurs when a c-list team of superheroes (The New Warriors)  try to ambush a b-list group of supervillains (without a collective fancy name)  hiding out in a home in suburban Stamford,Connecticut. Things go south and a villain with the power to explode um… explodes, but bigger than anyone expected, and ends up taking out a large chunk of the city including a grade school.  Unlike in Man of Steel, this community, destroyed in the fight, had people in it.  Lots of people died in this fight.  To make matters worse, The New Warriors were doing all this while being filmed for a reality show and bucking for ratings.

It’s easy to assume the folks at Marvel have an equally big triggering event planned for this movie, actually we know a little about it. In any event, it’s based around The Avengers, if only because they are some of the few established supers in the cinematic universe. Listing out the Avengers collateral damage is a good reason to call for registration, but in most of their big battles the Avengers were at least saving the world. In the Stamford incident the stakes were not supposed to be that high, this is not the Avengers, these are teens in costumes and all for reality TV ratings. Gross.

This also changes the flavor of registration in the comics because it’s not just about Captain America and the ten other elite superheroes. Instead, it was about hundreds of other would-be heroes who might have less training or backup. When Cap takes a stand against registration, he’s saying that, on principle, other supers that aren’t Avengers shouldn’t be forced into government control and he says that minutes after some nearly no-name supers caused all this destruction. See? different. 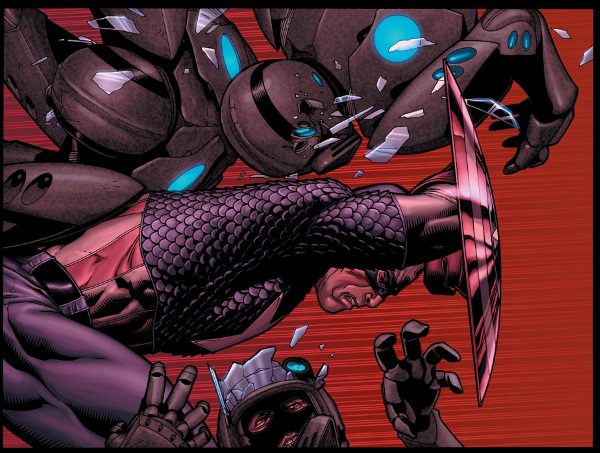 The first Civil War comic ends with an epic fight between Captain America and a few dozen S.H.I.E.L.D agents as Cap fights his way off the helicarrier and goes into hiding. We won’t see this in the movie however because they already freaking used it for Captain America: Winter Soldier.

Yep, if you pick up the Civil War hardcover at your local comic shop (it retails for under $40) you might get some deja vu when you watch Cap fight his way out of a building and onto a jet. It’s not the same context but the fight is clearly the basis for the famous Winter Soldier elevator fight and man it’s good. They are both good. Hell, why not do it again?  I’d watch another fight like this on screen, wouldn’t you?

#3 THE PUNISHER JOINS CAP’S SIDE, THEN KILLS TWO PEOPLE AND CAP KICKS HIM BACK OUT AGAIN 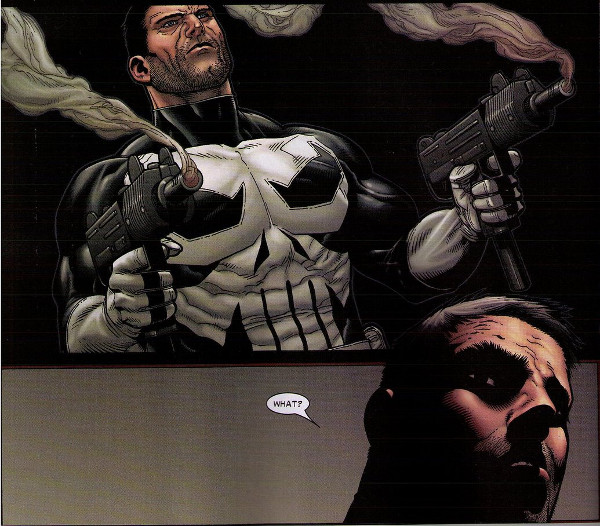 Halfway through the Civil War series in the comics things have gotten really heated really quickly. Captain America and Iron Man both have a small army of superheroes who are on either side of the issue and when they end up fighting, people are starting to get hurt. At this point villains are choosing sides too, since the Registration Act affects them just as well. Some are surrendering to Iron Man or fleeing the country and others are trying to find and join Cap to fight against the law.

Captain America is also taking almost anyone he can get to help fight to keep his team going. This includes Frank Castle, The Punisher, who brings Cap some added firepower. Of course, that all changes when moments later two (reforming?) villains show up to help Cap and Punisher shoots them both dead on sight. It doesn’t go down well with the anti-registration team and Cap beats up Castle and kicks him out. Castle won’t even fight back, unwilling to fight Captain America for any reason. It’s a pretty cool scene.

But we probably won’t see it in this movie for a whole bunch of reasons. Not the least of which is that Jon Bernthal’s Punisher hadn’t debuted on the Netflix series Daredevil before this movie went into production and considering how many failed Punisher movies there have been, that might have seemed risky to Marvel. Further there aren’t enough supporting players in the cinematic universe to build that scene in a way that made sense, but still it would have been cool. Maybe we’ll see a flashback to The Punisher dealing with the Sokovia Accords in the recently announced upcoming Netflix series. That’d be cool! 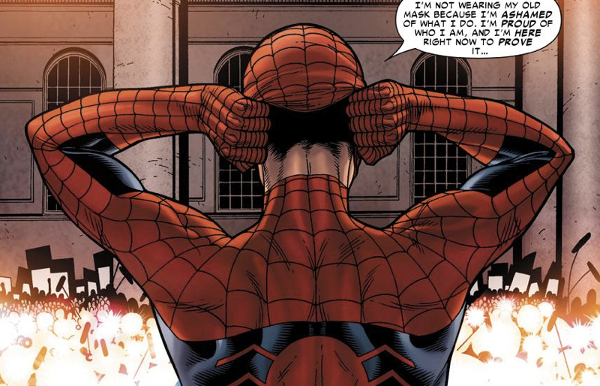 On of the most powerful moments in Civil War is when Spider-Man reveals his identity to the world in an effort to make a point about the need for registration. In the comics, Spider-Man might as well be the poster child for needing a secret identity as his villains always go after his Aunt May with such frequency it’s amazing there’s not a comedic bit where two of them bump into each other on the way to kidnap her or marry her. Let’s just say the reveal is a powerful one and knocks the cigar right out of J. Jonah Jameson’s mouth.

We probably won’t see the same in the film however because this newly back at Marvel Spider-Man hasn’t existed long enough to make this reveal meaningful. What’s interesting for me about the idea of Spider-Man unmasked, however, is that the current Marvel cinematic universe is one that seems to favor a lack of secret identities. Iron Man told the world who he was in the first movie. Steve Rogers is a public figure. Black Widow is testifying before congress. These Avengers, with the exception of Hawkeye are mostly putting it all out there. Will the new MCU Spider-Man be so public? Who knows? Maybe? He’s just a kid. 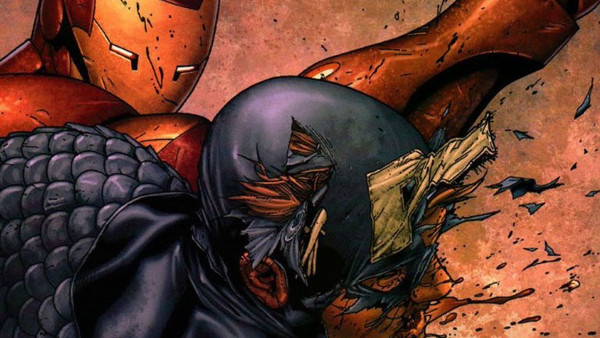 Of course we don’t know who’s going to come out on top in Captain America: Civil War and I’m not saying Iron Man won’t win in some way, but he probably won’t win in the way he does in the comics or with the same results.

Extra spoilers here: In the comics Captain America ends up giving up to Iron Man at the very end of a titanic fight. He’s about to take out Tony and a bunch of unpowered civilians get in his way and stop him. Cap realizes they’ve forgotten what they are fighting about and that the regular people of America (and the world) are caught in the middle again. After it’s all over, the registration act goes forward and Iron Man announces the 50 States Initiative to train and support a superhero team in each of the 50 states.

Considering they have the Infinity War coming up next, it’s unlikely the MCU will get so caught up in the effects of The Sokovia Accords even if Iron Man comes out on top.  Having something like the 50 States Initiative would be cool, and it could be a nice aspect of the upcoming Spider-Man film or maybe a Young Avengers movie, but it’s just not practical with the numbers of heroes and villains the Marvel movies have so far. I have absolute faith in Marvel’s films and I don’t want to suggest they would do something like making the accords an important plot point only to dismiss them even if Iron Man wins but I suspect an Iron Man victory will most likely affect the Agents of SHIELD TV series and the Netflix series more than it’s dealt with in upcoming films.


That’s just five of the big events in the comic series we won’t see in the movie and of course there are lots more. Considering the comics had another 200 characters to use it shouldn’t be a surprise there are whole sections of the books that won’t be relevant to the movie at all. They are so different in fact that I don’t know it will be fair to compare them. I think the comics series was inspired and worth picking up and adding to your collection. Really, it’s win- win; no need to choose sides. Check them both out, you winner you.

If you read the comics, tell us your favorite bits in the comments below, or tell us what characters the comic version of Civil War focused on that you wish was in the movie. We can’t wait to read your contribution.