5 Star Wars Battles Battlefront Should Bring in as DLC - Nerdist

Star Wars Battlefront is upon us, and we’re ready to feel the Force and dive back into the Battles of Hoth and Endor as well as get our first look at the battle of Jakku. While Star Wars has always focused on its heroes’ adventures big and small, from the Death Star to the bogs of Dagobah, but they weren’t always there for some of the biggest and best battles in Star Wars history. With battles on Jakku and Sullust showing us that the team at DICE is eager to throw the player into battles that aren’t just from the Star Wars movies, we picked a few Star Wars EU battles that we’d love to drop into in future Battlefront DLC or sequels.

The Battle for Cloud City

The Battle for Cloud City wasn’t just an extended part of Darth Vader’s scheme to capture Luke Skywalker, it was the Empire solidifying control of Bespin Gas, most well known for fueling blaster rifles. Lando’s efforts to keep Bespin out of the Galactic Civil War weren’t just about self preservation, it was about making sure he could keep selling to the highest buyer, and the Empire wasn’t going to be happy with that.

Cloud City has shown up in Star Wars multiplayer games like Jedi Knight 2 and Star Wars Battlefront 2, but hands-on time with Battlefront has made us excited about what DICE could do if they added urban environments to their level design and faithful recreation of the Star Wars universe. Even though canonically, there was no rebel force on Bespin when Han, Leia, and Chewie were captured, maybe a small strike force could have slipped in between Empire Strikes Back and Return of the Jedi to regain control?

The Battle of Gall

Here’s a little bit of old Star Wars history: Shadows of the Empire was the first Star Wars game to accurately replicate the Snowspeeder battle for Hoth, but it wasn’t the only major battle in that story. Shadows of the Empire traces the hunt for Han Solo between the events of Episode V and VI in the old expanded universe. The Battle of Gall wasn’t a particularly overwhelming victory or defeat for either side, but it was the first space battle for that other Correllian Smuggler Dash Rendar. It’s unknown yet how much Disney may want to have Rendar be back in the Star Wars universe, but given how many of us probably had his action figure and his ship the Outlander as kids, it’d be awesome to see it back in action as a sort of B-wing Variant of the Millenium Falcon.

The Battle for Coruscant

Coruscant, despite being a massive urban planet that probably would crumble under the weight of any sustained siege, has been the sight of numerous battles in the Star Wars canon. In Episode III, Count Dooku and General Grievous laid siege to the planet in a bid to capture Emperor Palpatine; and in Michael A. Stackpole’s Rogue Squadron books, the titular Rogues were part of a mission to take back Coruscant from Imperial Remnants.

DICE has maintained it cut the massive space battles that were part of Battlefront II in order to focus on making the ground combat as good as possible, but that doesn’t mean we can’t see Coruscant under siege somehow. Whether it’s Rebels jetpacking across the floating across traffic lanes or vertical warfare as the Imperials struggle to hold floor after floor of a massive Coruscanti tower, the liberation of the Galactic Center would make for astounding DLC.

This mission may be a bit rough, but it could be a cool stretch for the Battlefront team to attempt. Order 66, aka the one that gets all the Jedi killed, is shown on film as Clone troopers turning on their Jedi allies and striking them down with careful, cold-blooded murder. But what if the Jedi could fight back?

This mode might take some serious effort, even making it worth it for paid DLC. Stormtroopers reskinned to be wearing their old clone armor, Jedi units drawn from Star Wars past—and in the end, a game mode where one side is all clone troopers, the other all Jedi, the latter desperately trying to stay alive long enough to be evacuated by assaults from the former.

The Battles of Star Wars Rogue One. 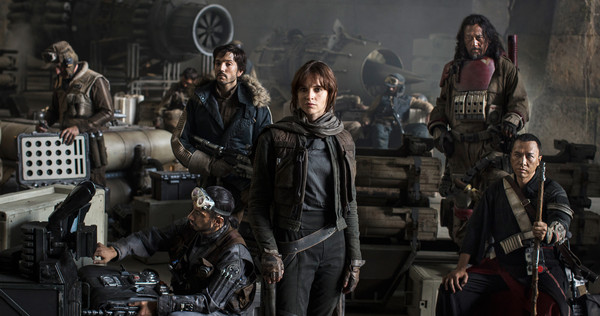 Obviously, we don’t know much about Rogue One, other than the fact it covers the theft of the Death Star plans and stars Felcitiy Jones, Donnie Yen, and Mads Mikkelson. This may be a long shot, as it demands there not be (another) Battlefront II by the time Rogue One hits, but like the Battle of Jakku, we’d love to see whatever major battle kicks off this movie to be playable in Battlefront before it hits cinemas.

And a bonus? We could get to play as Felicity Jones, Mads Mikkelson and Donnie Yen.

Let’s say that again, we could play as Felicity Jones, Mads Mikkelson, and Donnie Yen.

Heck we’d get a season pass for that EA.