Is Jon Snow Still Alive? And 4 Other Game Of Thrones Questions We Have - Nerdist

Is Jon Snow Still Alive? And 4 Other Game Of Thrones Questions We Have

April 24 may still be months away, but HBO has already started to (slowly) release details on the return of TV juggernaut Game of Thrones.

But even though details on Season 6 have been pretty tight-lipped, (rightfully so, given this season, more than any other of the show is pulling from material that author G.R.R. Martin hasn’t published yet) HBO has released a few little tidbits. Lucky for you, we’ve put them all together in one place. No need to thank us.

First, we got some photos from the set giving us a tiny glimpse into what our favorite (or least favorite) characters have been up to. You can find the full gallery of released images at the bottom of the article, but there’s one in particular that I want to make sure to point out. Look how Bran (Isaac Hempstead Wright) has grown up! Missing since last season, it’s the first we’ve seen of him in awhile. We also got our first look at the recast Three-eyed Raven: Max von Sydow is now in the role, fresh off of his stint in Star Wars: The Force Awakens.

And then, we got our faces full of this trailer:

Sure, it starts with showing us faces of beloved and reviled characters that have all been killed, but then it zooms out and focuses on some really major characters that are still very much alive. Does it mean they’ll all get the axe or sword or plague this season? Probably not, but it certainly is playing with the idea that fans of the show know all too well: Nobody is safe, no matter who they are.

HBO has also released a set of trailers looking at the battle banners of some of the major families that you can check out right here.

But these teases are just the tip of the iceberg. Season 5 left a lot of threads untied and many of the various stories unresolved with cliffhangers. So, before we get to Season 6, here’s some questions we still have about what’s coming up next for the denizens of Westeros.

Is Jon Snow dead or alive? 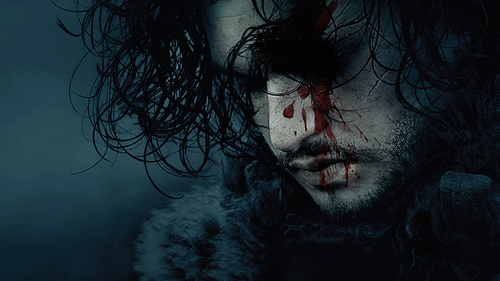 This probably one of the biggest — if not THE biggest — question for Game of Thrones fans right now. The cliff-hanger ending from Season 5 is the same ending that book readers have been debating since A Dance with Dragons was published, and given that’s as far as the books have gotten, nobody knows the answer to this right now.

There’s been a lot of debate in the media over this, with every move Kit Harrington makes being followed and reported on. The show is being adamant that Snow is dead and gone for good, but could there be more to the story than that?

I think so. The question, probably, shouldn’t be if Jon dead or alive, but how he will come back. Keen-eyed viewers noticed that Mellisandre (Carice van Houten) showed back up at Castle Black just around the same time as Snow’s fall and this wouldn’t be the first time the show has has magic bring somebody back from the dead. While we can debate how Jon will return, I highly doubt we’ve seen the last of the Bastard of Winterfell.

What is Dany going to do now?

How the mighty have fallen. Daenerys (Emilia Clarke) spent most of last season having to deal with the messes of Meereen, before ending the season escaping on the back of Drogon and then being captured by the Dothraki.

But, one of the new images from the season shows her as a prisoner, meaning the reunion with the Dothraki might not be going as well as she might have hoped.

But the bigger question is what will Dany do now? Will she go back and try to clean up the mess in Meereen? With Khal Drogo (Jason Momoa) dead, how will she be met by the rest of the Dothraki? Or will she finally just decide that she’s had enough of Essos and pack everything up and finally make it to Westeros? Either way, it looks like the Mother of Dragons may be in for a rough start to Season 6.

What’s up with all these masks?

The new images show Arya (Maisie Williams) very much still blind from the events in the House of Black and White from last season. But the mask trailer begs the question: What exactly is going on with all those faces? How do they work? What are they? Is she going to find the mask of her father down there like the trailer starts off with? I’m guessing no to the last one, but the show still has a bit of explaining to do with exactly what is going on here.

Either way, Arya has access to enough masks to make the Happy Mask Salseman the happiest person alive and it’s just going to be interesting to see how and if she decides to use them. Well, and how she adapts to being blind.

What is Cersei going to do after her big walk?

Once the most powerful woman in Westeros, Cersei (Lena Headey) got knocked down quite a few pegs last season, as The Sparrows rose to power in King’s Landing. She was stripped — literally — of everything she had, before meeting up with Ser Robert Strong and plotting her revenge. It will be interesting if her walk of shame has impacted her at all: Is she going to come back a more penitent and respectful Cersei? Or has her undoing only set her to further try to exact revenge? I highly doubt she’s going to go into the night quietly…

But, we’ve also seen pictures of Jaimie (Nikolaj Coster-Waldau) back in King’s Landing. Could the couple make up now that bro-bro is home, or will his failure in bringing Myrcella (Nell Tiger Free) home alive (the images seem to be showing her funeral), push the sibling power couple further apart?

What has Bran been up to?

This is another tricky area, because nobody knows. Well, at least nobody outside of the people involved with the books and show, at least. Bran was kept out of the last season of the show, and his story has pretty much caught up to his arc in the books. We know he’s finally reached the Three-Eyed Raven under that mysterious Weirwood tree…but what else happens from here is anybody’s guess.

It will also be interesting to see if the show decides to address the year-long season gap. Will Bran’s story pick up one year later, and reintroduce him to viewers after being under the guidance of the Three-Eyed Raven for a year? Or will his story pick up where we last saw him and just avoid the real-life aging of the actor?

There’s myriad other questions I still have, as well. Will we see more of Dorne? What’s going on in Pyke? Who is Ian McShane playing? Where can I find a replica of The Viper’s pretty yellow coat? Hopefully at least a few of those will be answered early in in season 6. April’s going to come a lot quicker than winter, at any rate.

What are you most excited to see in the next season of Game of Thrones? What questions are you really hoping to see answered? Be sure to send us a raven…or you could just comment on the article below. Actually, yeah, that one is probably easier.