Earlier we told you about Tak, a previously only fictional game from the Kingkiller Chronicle books that has been made real by Abel Game Designers (and kickstarter backers). This, of course, is not the first time real world nerds have pulled fantasy world games off the page or screen and into your living room. In fact, here are five more great examples: 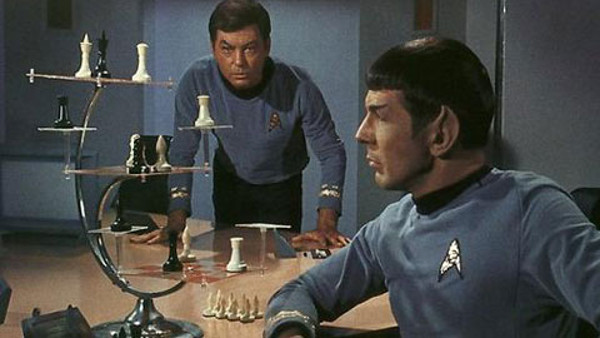 This might be the only entry on this list that was initially created simply to give a prop a more space age feel. Seen first in the original Star Trek TV series (1966-69) the on-screen game was a collection of boards for other three dimensional games (3D Tic-Tac-Toe is apparently already a thing)  and some very futuristic looking chess pieces. The board did have the 64 spaces used in actual chess (perhaps only accidentally) but no actual rules were drawn up. Seven years after the series concluded,  Andrew Bartmess designed the first official rules, taking cues from some proto rules included in the Star Trek Fleet Technical Manual book from two years earlier.

If you’re wondering, the game plays like normal chess but pieces can move on and off the smaller floating boards allowing them to ascend or descend the whole structure. The smaller boards can also be moved, creating paths up various ways. It is pretty easy to build your own board but you can also buy them here from StarTrek.com 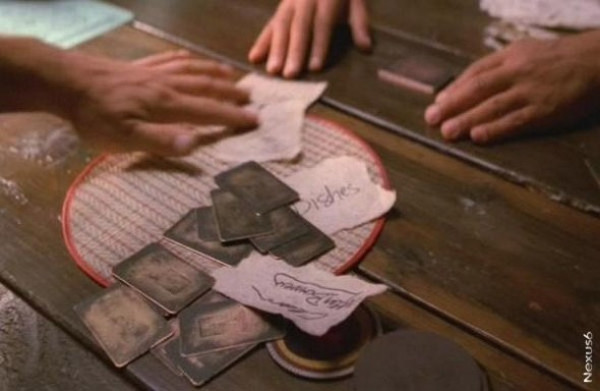 I was happy to see a retail version of this game mostly because it’s taken from my favorite episode of one of my favorite series of all time. In the episode “Shindig,” we briefly see the crew of Serenity playing cards. It’s not a long scene and we don’t learn much about it, but compelling language like “Tall card … plum. Plums are tall” certainly got a lot of people wondering what the game might have been like. That episode was written by the amazingly talented Jane Espenson, who mentions in the DVD commentary that rules for the game were on Fox’s website but to this day nobody seems to have found them.

Instead game company Toy Vault created a retail version of the game, which plays a lot like draw poker but uses suits inspired by mahjong tiles and incorporates a “tall card” mechanic that creates a trump suit similar to games like Spades or Hearts. You can grab a set here at Amazon.


Both the original Battlestar Galactica series and the modern (so called reimagined) series featured hexagonal card games used to keep anxious Viper pilots busy between life threatening space battles.  These were actually supposed to be the same game, or at least have the same name. You see, each series also had a lacrosse style game but with each series gave it a unique name.  (Pyramid in the original, Triad in the more recent series.) Reimagined series creator Ronald D. Moore explains that at some point he simply transposed the names. Because they were designed separately and largely improvised by the two different sets of actors, the games are quite different.

Pyramid was actually sold in stores around the time of the 70s series but those decks are hard to find. Now, entrepreneurial nerds have created print and play versions and even online playable versions. Go, nerds, go! Triad was created for a limited run from the awesome folks at Anovos (who produce all the amazing Battlestar costumes and now Force Awakens stuff, too) but because they stopped selling it, you’ll have to find those decks on Amazon if you want to try your hand at beating the pants off a Cylon or whatever. 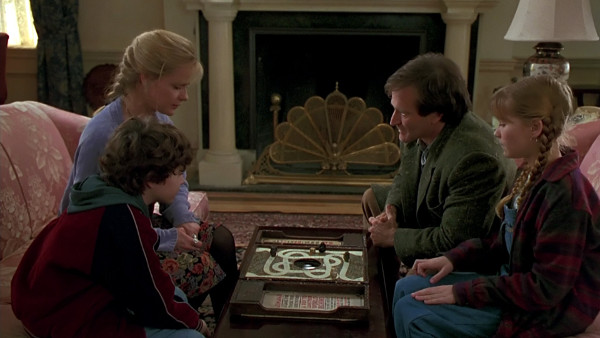 While it seems like it might be counter-intuitive to build a board game based around a movie in which the same game traps people forever in a terrible jungle, somebody did it. I guess Tristar Pictures and Hasbro figured kids who saw the movie would throw caution to the wind to have the experience themselves. Sadly, the game doesn’t exactly capture the magic of the one in the movie, literally or figuratively, but it did have some innovative game mechanics.

Landing on a certain space would require players to draw cards that could only be read by placing them under a red lens in the center of the board. This sort of simulated the short poems revealed in the center crystal of the movie. That’s quite clever, but it didn’t help this game overcome is lack of compelling action and over dependence on random rolls. Plus, in the movie they rolled 2 six-sided dice and in this game you move by rolling a single eight-sided die. Come on, that’s just a terrible lack of accuracy.

If you do want to recapture a little of the feel of Jumanji and you happen to live in LA, there is an escape room that is “Jungle Game” themed.  Actually, I’ve tried this one myself. It’s quite enjoyable. 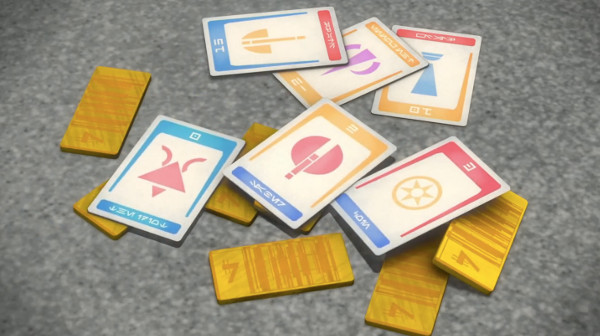 If you’re looking for high stakes it doesn’t get higher than Sabacc, at least if you’re Lando Calrissian. That’s right, it’s the famous card game where Lando lost his shirt… well actually his ship… to Han Solo. Do you think you have what it takes to rake in a win like that? The game basically plays similarly to Poker but with hands scored more like Blackjack. It operates with two pots, one that you can win hand to hand and another that you only win by hitting Sabacc (a perfect score of 23 points). In the Star Wars canon, there are even variants on the game including “Corellian Spike” which incorporates two six sided dice. Han won the Millennium Falcon off Lando in a Corellian Spike game and has kept the pair of dice in the Falcon’s cockpit as an additional trophy.

There was an official set of Sabacc cards included in an expansion for the Star Wars RPG called Crisis on Cloud City but there have also been many fan made or independent press versions out there. Perhaps Disney will reissue the game officially, to coincide with one of the new movies.

That’s just five games that started in the world of fiction and found their way into reality. It’s good to know that if the studios don’t see enough dollar signs to make it on their own some fans will  DIY it on their own. Of course, there are still games that have yet to be made real and deserve it. (For example, I would like to see Strategema from Star Trek become a board game or video game.)

Tell us what games you’d like to see made real in the comments. Or give us (and your fellow readers) a good lead on one that’s been made real already. Until then, we’ll be playing all the rest,  Wish us luck.