Join Dave & Molly and a panel of creatives as they work along with audience chat to write and finalize a short sketch during the show’s two-hour run time. Between episodes, the sketch will be recorded and presented to the audience the next week! Tune into INT. Writer’s Room every Monday at 4PM on G&S Live!

One of the foundational concepts of good improv is the idea of “Yes, And” It’s related to the first rule of improv, “Say Yes”, and ranks among the most important. This rule adds elements to a scene. Saying yes prevents arguments about what’s going on in a scene, while saying “Yes, And” provides a direction for the scene to flow. RPGs use this rule primarily when the dice hit the table. The story should move forward on a successful dice roll and move in an interesting direction on an unsuccessful roll. This concept isn’t entirely new; anyone that’s rolled a natural 20 knows that causes the Dungeon Master to say “Yes, that’s a hit and you do more damage.” There are some games that apply this idea more directly to the narrative, where an excellent roll goes behind more damage and puts the narrative directly in the player’s hands for a moment to let them steer the story.

We’ve talked about Fate Core‘s influence on succeeding at a cost but on the other end of the spectrum, there’s success with style. Rolling really well can lead to a free aspect being created to use in the future. Sneaking past a guard might make them Completely Oblivious which will make them slower to react to an alarm. These aspects can also be used to create conditions on a battlefield such as Bleeding or Wounded in the Arm. Rather than trying to figure out the complex rules for things like called shots, Fate Core conflicts let players create these elements in the moment of play to influence the story. 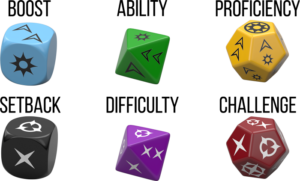 When players roll the dice in Edge of the Empire, Age of Rebellion and Force and Destiny, the dice give results on two axes. They tell players whether they’ve succeeded or failed but they also generate Advantage and Threat. Players can use Advantage to spend on effects like bonus dice for follow-up rolls or other abilities they’ve purchased for their character. GMs can use threat to add reinforcements, inflict minor damage on players and cause plot twists neither side saw coming. This mechanic reinforces that Star Wars feeling of always moving forward in a story. It’s very rare for a dice roll where nothing at all happens. Most games tie this idea to high successes or bad failures, but this system provides inspiration for failures with upsides and successes with downsides. With a generic version coming out later this year, it will be interesting to see if FFG adapts the game to other settings under its control.

Tales From The Loop

This d6 system is deceptively simple, but it’s powered a lot of Free League’s RPGs. It’s on display in a very simple but powerful form in this homage to 80’s kid-powered sci-fi and fantasy. Players need one six to come up on a pool of dice to succeed on a roll. More sixes let the player buy bonus effects. There’s a list of suggested effects after each skill to help inspire players and Game Masters, but the situational nature of the story means the player can offer suggestions as to how their good luck can manifest in the tale. All it takes is one extra six to convince the robot it likes candy…

The swashbuckling rules for the Second Edition already posit players as larger than life heroes, but there are Opportunities to be had whenever a risk is taken. The player must decide after they roll if they spend one of their Raises to take an opportunity while possibly dealing with a consequence. Is it worth it to take the Duke’s letter if the hero is seen taking it? Or driving a blade into the eye of a sea monster? Players can create opportunities as well—but only for other players. This set-up encourages teamwork between the good guys that may or may not involve a little friendly argument down at the dockside pub when the ship sails into port.

Watch and see how the crew on INT. Writer’s Room on Twitch uses these ideas to make their sketches work!

What is your favorite big success story? Let us know in the comments.


Rob Wieland is an author, game designer and professional nerd. He writes about kaiju, Jedi, gangsters, elves, Vulcans and sometimes all of them at the same time. His blog is here, his Twitter is here and his meat body can be found in scenic Milwaukee, WI.