Wanna Create A Great Character? Ask Yourself These 4 Questions - Nerdist

Wanna Create A Great Character? Ask Yourself These 4 Questions

Even though your character is entirely your own, it’s important that she fit in at the table. Being the one paladin who meets swear words with drawn swords in a party of escaped thieves, assassins, and used carriage salesmen is not likely to lead to a great night of gaming.

Likewise, a great character must give your Game Master something to work with. Yes at the age of 14, we all played characters with names like Darkon McMurder whose favorite food was macaroni & cheese and talked exactly like we did in real life. And that was fun, no doubt. But a great character should go beyond being your avatar in the game world. She should have a life before and after you sit down to play her.

These five questions are designed to get your character set up with your fellow players, the Game Master, and the wide world, things that are necessary to create a person you’d like to be for four hours a week.

What is your character’s history?

Great characters are not murder hobos with existences that end at the dungeon door. Where was she born? What was her childhood like? Was she a bully or bullied? Why is wandering unexplored outback for monsters her best career choice? A great character needs a past, because a past leads to…

Who does your character care most about in the world?

Han had Chewie. Luke had Uncle Owen and Aunt Beru. Frodo had Sam. And Gollum. Those examples show the power of giving your character connections to the world. They can provide allies, friends, possible foes, and great motivation for a character. The importance of motivation is important. It will make science teachers become drug lords, and your character’s family can give her the reason to go forth and explore.

Why are you with the rest of the party?

Simply meeting some drunk dwarves and a human who openly declares his occupation as thief and rolling out to sack the local castle with them will work out about as well as going on a road trip with randos you meet at the bus depot. Giving yourselves a reason to be together will provide unity down the line. You don’t have to like each other, you don’t even have to trust each other, although if you’re in a dungeon it will really help. But having a reason to be together keeps the party from splintering (and a dungeon crawl will turn into a horror movie if you split up) and it creates story. My personal favorite motif is to make all the player characters FBI agents, or their fantasy equivalents. (“We are the Queen’s men! Give us your horses or be named enemies of the crown.”) 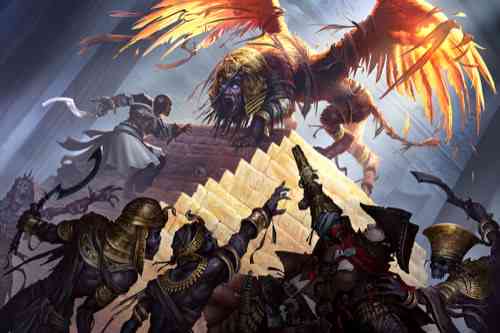 What are your character’s goals?

Now that you know who your character is and where they are in the world, it’s worth asking what they want. A goal often defines a character. Just look at any book, show, play or novel. Antigone wants to bury her brother’s corpse. Hamlet wants to avenge his father’s foul and unnatural murder. Indiana Jones wants to put the ark in a museum. Ghostbusters of all genders just want to bust ghosts. Your character’s goal is almost a distillation of all that she is and could be. A good goal should give the Game Master something to work with.

Tell us how you get characters ready to roll in the comments below!

Other images courtesy Paizo Publishing and the public domain.