4 Tabletop Card Games That Make You Think On Your Feet

Join Dave & Molly and a panel of creatives as they work along with audience chat to write and finalize a short sketch during the show’s two-hour run time. Between episodes, the sketch will be recorded and presented to the audience the next week! Tune into INT. Writer’s Room every Monday at 4PM on G&S Live!

Tabletop RPGs have the most direct relationship with improvisation. Everyone at the table is there to tell a story by reacting to each other talking and interpreting the dice rolls. Lately, card games have emerged to fill a similar role, thanks to lighter rules and faster playing times. We’ve talked about card games that inhabit the RPG space, but games like Snake Oil and Superfight encourage discussions at the table full of humor, clever ideas and maybe even a hint of character work. Here are some other card games that strengthen everybody’s improv muscles. 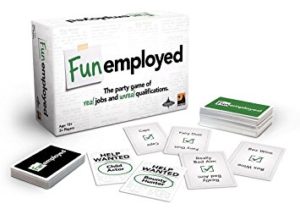 Nearly everyone’s had the rough experience of trying to pad out a resume or convince a potential employer that a weird skill is actually vital to the job. Dungeon Master and Project Manager are basically the same thing, right? Funemployed deals our four weird qualifications, ranging from “emotionally dead” to “a dragon” and asks each player to justify why those traits make them the best candidate for the job. What follows is a game that already feels a little like an improv sketch game with everyone involved acting on the audience’s wacky suggestions. 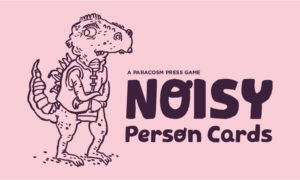 Getting a character’s voice right can make all the difference in making a memorable character. Noisy Person Cards began as a way to help Dungeon Masters work on their voice acting, but it became a fun little game in its own right. The judge chooses a character picture at the top of the round. The other players all have phrases written on cards in their hands and must choose one to read in the best voice that matches the character. The judge (or anyone who doesn’t think they can do a proper voice) can opt to sacrifice one of their cards to add a descriptor to the picture, so a goblin can go from a regular goblin to a Dreamy Goblin very quickly. The game is a good illustration of building characters with minimal information that goes a long way. 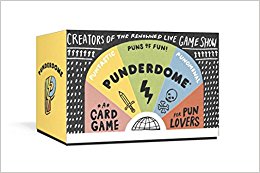 The pun is the lowest common denominator of humor. But that doesn’t make it ineffective, as the late, lamented #hashtagwars of our friends @midnight showed for many years. Punderdome asks players to draw two cards and then gives them a short amount of time to make a pun that combines the two items. What’s the best pun that combines cheese and board games? We’ll start with the Cheddarers of Catan, but we’ll be sure to see better ones in the comments.

This card game is one to keep an eye on in the future. It was available to demo at Gen Con 50. Rather than the common structure of dealing cards to players to use as prompts for a judge, the leader of this game hands out blank card prompts to the players to fill in. Once the cards are written, everyone completes a fake morning news cast using the ideas with the usual sports, weather and other segments of the news cast. All the cards are shuffled back into the deck, more blank cards are added and the players run a midday news cast. The third round is an evening news cast with more blanks filled in and the cards from the previous rounds cycled in again. The repetition of cards allows for players to make call backs to earlier broadcasts, tell a long funny story throughout the day, or even include weird coincidences that use the same words in different parts of the broadcast.


Watch and see how the crew on INT. Writer’s Room on Twitch uses these ideas to make their sketches work!

What is your favorite big success story? Let us know in the comments.