As always, if you aren’t caught up with The Walking Dead, read on with care! Spoilers ahead!

Sunday’s episode of The Walking Dead followed Tara and Heath while they were out scavenging for Alexandria, and further expanded the show’s universe by introducing a new community–Oceanside. While this episode had the slower pacing of a character-focused episode, we not only got to learn more about Tara (and her serious lack of geography and boating vocabulary), but meeting this isolated community on the seaside set up some serious plot points for further episodes. It also taught us some very important things about Negan and The Saviors that will be key as the season pushes forward.

The Saviors Have a Huge Reign

Excluding Alexandria, Oceanside makes the third community we’ve met that has been under Negan’s control. We know the group underestimated the size of the Saviors when they attacked the outpost last season, but we still don’t know their exact numbers. The fact that we continue to meet new communities under Negan’s thumb shows just how big of a kingdom the Saviors have–it may even be even all of Georgia. If Rick is truly done fighting Negan, but Michonne, Sasha, Maggie, Rosita, Jesus, Carl, and hopefully Tara are going to rise up against Negan and his men, it’s important that they’ve got to get a firm handle on exactly how many Saviors there are.

The Saviors May Be Everywhere, but They Aren’t Gods

Yes, it stands to reason that Negan rules a big chunk of Georgia, but it’s important to remember that they’re all just people. Meeting the women of Oceanside proves that they aren’t this unstoppable, inescapable force. They are brutal and not to be idly messed with, but if Oceanside could escape, that means anyone could run far enough to escape Negan. It’s not a very glamorous option, but it proves that if you’re willing to run far enough and seclude your people, escape is possible. It at least provides people with an option apart from living under Negan’s tyrannical rule for the rest of their lives.

Negan and The Saviors Have Pissed a Lot of People Off 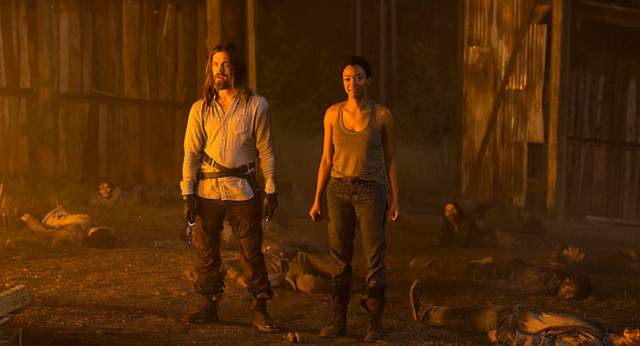 Next to realizing how wide the Savior’s reach is, this is probably the most important point of the episode. Yes, the Saviors do rule over a TON of communities (and we can only assume we’ve not met all of them), but in doing so they’ve made a lot of enemies. Certainly a lot of people are frightened of the Saviors, but Negan’s rule has come with a steep body count. We saw what he did to Alexandria, we heard about what he did in Hilltop, we can assume what went down in the Kingdom, and on Sunday, we learned about this mass executions that happened in Oceanside. In asserting absolute control, Negan has angered quite a lot of people. Perhaps escape isn’t the route that Rick’s group will take, but if Maggie, Sasha, Rosita, Jesus, Carl, and anyone else ready to take up arms against Negan (Carol? Please?) can unite the communities Negan has subjugated; the Saviors are screwed. This season has felt especially bleak, but the more we see the huge group of people capable of rising up against Negan, the more hopeful it feels.

This episode was a slower one that happily did not feature the brutal deaths of major characters nor did it highlight the brutal torture of our faves. What it did do was show us how big this post-apocalyptic world is, and that Negan has simultaneously made a lot of subjects and a lot of enemies in the world. I don’t know about you, but I think a big storm is headed towards Negan. I, for one, am ready to see Negan pay for what he did to Glenn and Abraham, and if Alexandria can manage an alliance with Hilltop, the Kingdom, and Oceanside, they’ve just got a fighting change.

What did you think of this week’s episode? What are your theories about Oceanside? Let’s talk about it in the comments!