Fear is the most difficult of emotions to evoke in a role-playing game session. But these three scenarios do all they can to give your characters nightmares.

The Cursed Chateau is a twisted and insane haunted house scenario. It is for the D20 weird fantasy role- 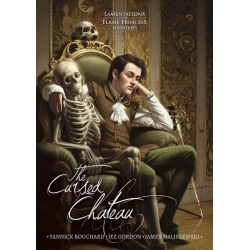 playing game, Lamentations of the Flame Princess. (And it ports easily to the d20-rolling RPG of your choice.) Lamentations is the RPG a band of criminally insane game-geeks would write if they had nothing to inspire them, but the D&D Red Box and the collected works of Slayer.

Lord Jourdain was a wealthy aristocrat whose hobbies included devil-worship, serial killing, and cannibalism. He murdered one of his footmen with an axe to the face, resurrected him as undead, and then killed his other footman with an axe to the face so they would “match.” After having experienced every pleasure & horror he could imagine, he decided that life had nothing more to offer, and committed ritual suicide “in the hope that the next world might prove more interesting than the present one.”

Jourdain’s consciousness did survive death, but was unfortunately bound to his estate. To amuse himself, Jourdain has begun trapping travelers on the estate and tormenting them to alleviate his ennui. None have ever left the estate alive…

The characters, pursuing a lost relative, or perhaps simply looking for a place to stop on the road, will enter the chateau, and have to find a way out by plumbing Jourdain’s secrets, or die trying.

And that road out of the chateau is so bent, so insane, that it could only be brought to you by the disturbed and broken minds at Lamentations of the Flame Princess.

Call of Cthulhu is a role-playing game in which characters must face the horrors of a universe black and implacable beyond human ken. In “Blackwater Creek,” which is found with the 7th Edition Keeper’s Screen, characters discover these monstrosities while exploring the eponymous village. Set in the 1920s, characters are either searching for missing archeologist Henry Roades and his wife Abigail. Or, they take on the roles of bootleggers looking for the source of the incredible whiskey which has lately begun to flow out of Blackwater Creek to a parched and thirsty Boston…

But Blackwater Creek is no sleepy backwater village. Something has gone wrong there. The characters soon hear of livestock giving birth to dead calves, but the calves are born black with mold, as though they had not just died but begun to rot in the womb. The village’s children have sores which weep a black ooze. And the whiskey, delicious as it is, gives those who drink it nightmares for days on end. Nightmares in which a woman is screaming, moaning, and crying for help. The voice of the woman is that of Abigail Roades.

The scenario is a sandbox. The characters able to go anywhere they want in the village to get to the root of the twin mysteries of the location of the professor and his wife, and where the awesome booze is coming from. A sandbox structure is always a plus, because it allows players to discover the story through their own agency, and not feel led around by the nose.

The scenario’s climax is both mythic and repellent, and likely to leave players revulsed and covered in gooseflesh, all of which I mean as high praise.

Trail of Cthulhu is another game of Lovecraftian horror, but set in the 1930s and using the graceful and fast-paced GUMSHOE system created by Robin Laws.

Dead White World is unique among Cthulhu gaming products. In most such games, the characters are working to prevent the return of the Old Ones who will destroy the world. But by scene two of Dead White World, the world is already ruined. The end is simply put: “On 2nd November 1936, the stars align.”  The characters, instead of trying to save the world, must navigate a landscape chockablock with every frothing horror of the Cthulhu mythos while attempting to discover what killed it.

The characters awake from a train crash to find an eerie silence. No ambulances, policemen, or firemen

are tending the fiery wreck. There is no sound of anything but the characters for miles, though beautiful white plants have sprouted and grown everywhere, and white seeds drift on the wind.

As the characters walk to the nearest city, they see dead men and women everywhere they go. Some of the faces are frozen in masks of pain. Others, more horribly, are obvious suicides. (One pair drank bleach, and white froth lines their mouths…)

Finally, the characters reach Dover, and the sea. Beyond the surf, monstrosities of titanic size lumber through what must be a hundred feet of water, yet their waists are not getting wet…

This scenario is engaging, horrifying, and disturbing. Furthermore, it shows Cthulhu fans the very thing they’ve long feared. A world where the stars have come right, and the Old Ones walk once more.

It is also available in Cthulhu Apocalypse.

What scenarios do you think are scariest? Let us know below!