The merc with a mouth finally gets top billing in his own flick this February. But that’s still too long of a wait to experience DP’s brand of lunacy in full-motion, ain’t it? Well, here’s some killer anime to feed that fix in the interim. Granted, none of these shows are exactly like Deadpool. But the anti-hero has been around for over 25 years, now, and there are countless layers to his mercenary/ninja/mime mystique. Read on, and see if any of these slice the ‘Pool at just right the angle for you… 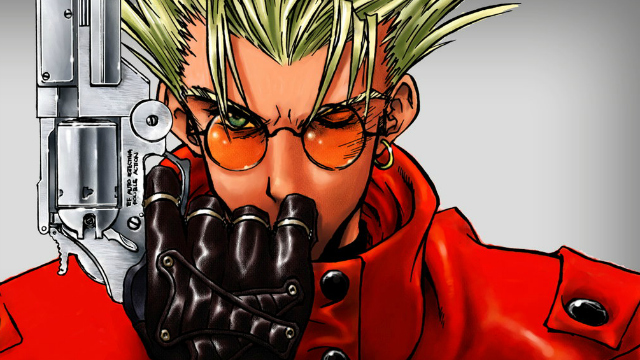 Vash the Stampede might as well be anime’s answer to DP. And that assertion isn’t figurative. Just as American artists like Joe Madureira have worn Japanese influences on their sleeves, Yasuhiro Nightow overtly drew inspiration from early Image Comics when crafting Trigun. That crop, of course, included Todd McFarlane, the creator of Spawn, and… Rob Liefeld, the co-creator of Deadpool.

C’mon. Look at any of the Gung-Ho Guns that Vash battles. Over-the-top monsters like Monev the Gale, E.G. Mine and Caine the Longshot look they popped straight out of the pages of Youngblood.

Art styles aside, there are overt similarities between these red-garbed, jokey guns-for-hire desperately trying to live down their mass-murdering reputations. And we’re not just talking about how Vash’s donut habit rivals DP’s taste for chimichanga. See, Trigun‘s covers generally misrepresent its actual plot. Vash might look like a cool badass, posing with his revolvers, but he’s actually a pacifist with this naive notion that he can collect bounties on cold-blooded scoundrels without killing any of them. The intrigue lies in watching him go to absurd extremes to avoid bloodshed (much like Deadpool does in the classic “Mithras Saga,” wherein he unsuccessfully tries to mend ways after being chosen as a galactic savior). 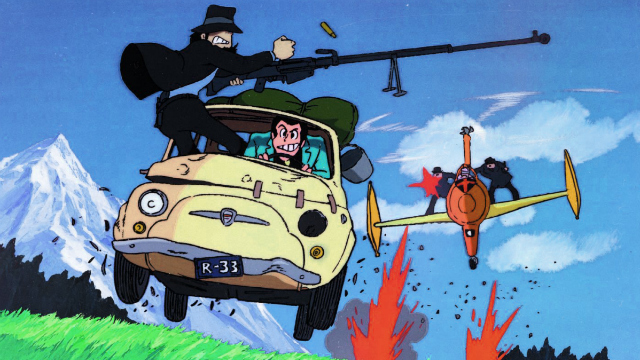 This master thief might not be as nasty the ‘Pool, but there’s still that common set-up of a criminal adventurer who doesn’t take his job too seriously. More to the point, he’s been around since the 60s–throughout countless comics, shows, animated features and live-action movies–so the Lupin III experience varies significantly depending on the talent involved. The swashbuckling romance Hayao Miyazaki brings to The Castle of Cagliostro differs greatly from the oddball surrealism in Sōji Yoshikawa’s The Mystery of Mamo. And neither has The Woman Called Fujiko Mine‘s retro revisionist feel.

Does that sound vexing to sort through? Well, it isn’t any more complicated than sussing Deadpool Pulp from Deadpool MAX, or DP’s depiction in Wolverine Origins from how he appears in his solo feature. You can deal.

Lupin’s supporting cast generally remains constant. There are his partners-in-crime: the gunhand, Jigen, and Goemon, the latter-day swordsman. The three of them are relentlessly pursued by the no-nonsense Inspector Zenigata. And Fujiko Mine is the enduring wild card, a femme fatale who competes with Lupin–and beguiles him just as often. Longtime Deadpool fans will see parallels to their would-be romance in DP’s oft-frustrated affections for Siryn, Typhoid Mary and Copycat, et al. 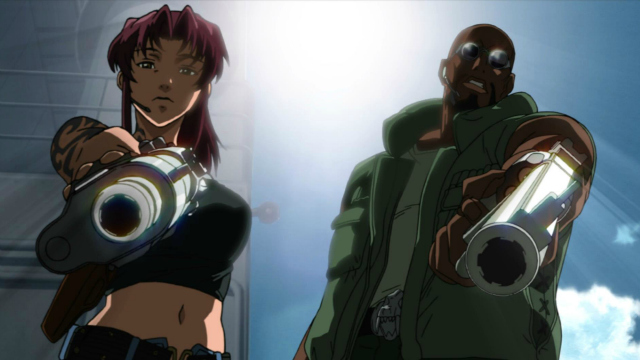 Granted, this show’s premise is a lot like Wanted‘s. A mild-mannered cubicle jockey gets kidnapped by international pirates who then unexpectedly enlist him into their gang. Past that, though, Black Lagoon has far more of the ultra-violent black humor that’s reminiscent of Deadpool.

Again, there’s a balance between grim character drama and outlandish absurdism. Our lead, Rock, reinvents himself as a pistol-packing merc, but still has some hesitations about truly embracing his co-workers’ hard-hearted ethos. Throughout numerous explosive missions on the Southeast Asian seas, he wrestles with these questions of morality during stand-offs with killer robot maids and gun-toting nuns. Because where else would you?

The show is stolen, however, by Revy, Rock’s mentor, rival, and potential love interest. She’s an asskicker with surprising depth and dimension, hiding plenty of pain and anguish under the bravado. Why, it’s almost like she’s covering a gnarled, tormented face with a playful lady bug mask!

Would more seasoned otaku in our audience care to offer some of their own recs? Fire them off in the talk-back below. What other anime would Deadpool fans dig?