Sam Mendes’ name may be synonymous with some of the most successful and acclaimed films of the past two decades – from American Beauty to Skyfall – but for the director of both screen and stage projects, he’s made his first that truly could belong to no one else. Inspired by stories told by his grandfather Alfred Mendes, 1917 offers an extraordinary look at a little-seen and even less understood conflict during World War I from the perspective of two British soldiers tasked with delivering a message that may mean the difference between life and death for 1600 of their comrades. 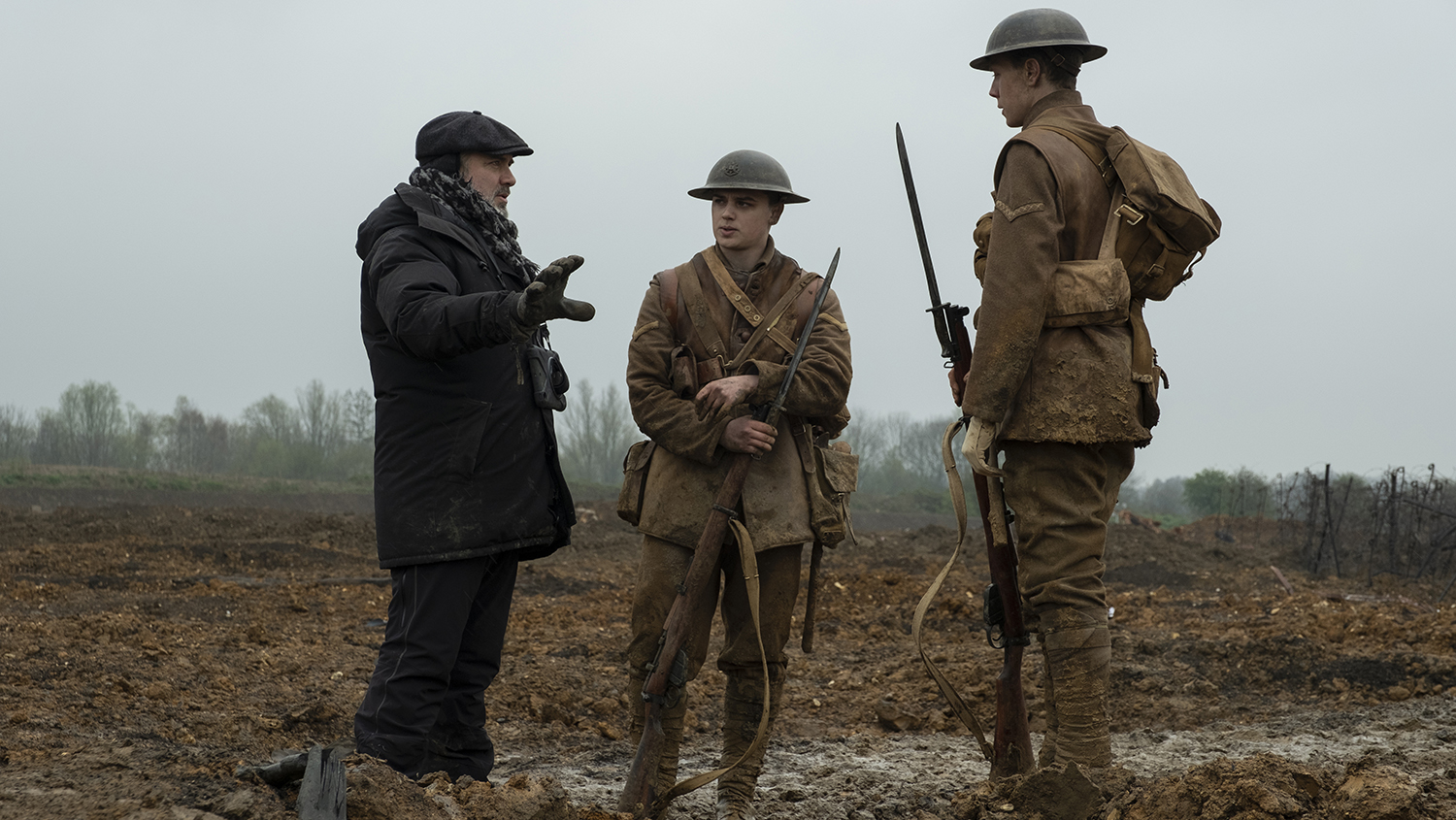 The film marks Mendes’ first credited effort as a screenwriter, working alongside Krysty Wilson-Cairns ( Penny Dreadful) on a uniquely palpable tribute to an earlier generation’s sacrifice: his characters’ mission unfolds in one continuous “real-time” take, creating a simmering, inescapable exercise in tension as the risks they face intensify with each new discovery on their route. The film’s propulsive momentum and its constant sense of discovery mirrored Mendes’ own efforts to continue finding stories he’s passionate about, and then figuring out distinctive and challenging ways to tell them.

“It’s increasingly difficult to find things that I want to do. It’s why I ended up writing this for myself,” Mendes told Nerdist. “The more movies you do, the less genres there are, the fewer challenges exist, because you feel like even if you haven’t met them, you’ve at least had a go, and you don’t want to repeat yourself – or at least I don’t want to repeat myself. So it is always a struggle to try and find something that it’s worth spending two years of your life on them.”

In this case, the personal recollections shared by Mendes’ late grandfather, a soldier during WWI, provided more than enough inspiration to motivate the filmmaker. He subsequently amplified the difficulty level by choosing to depict the action in the story seamlessly, which would require long, elaborate takes and some extraordinary, invisible cuts that made it seem like the two young men on their mission to deliver a vital message took place in one location impossibly authentic to the details of a 100-year-old battlefield. “There were no easy shots,” Mendes admitted. 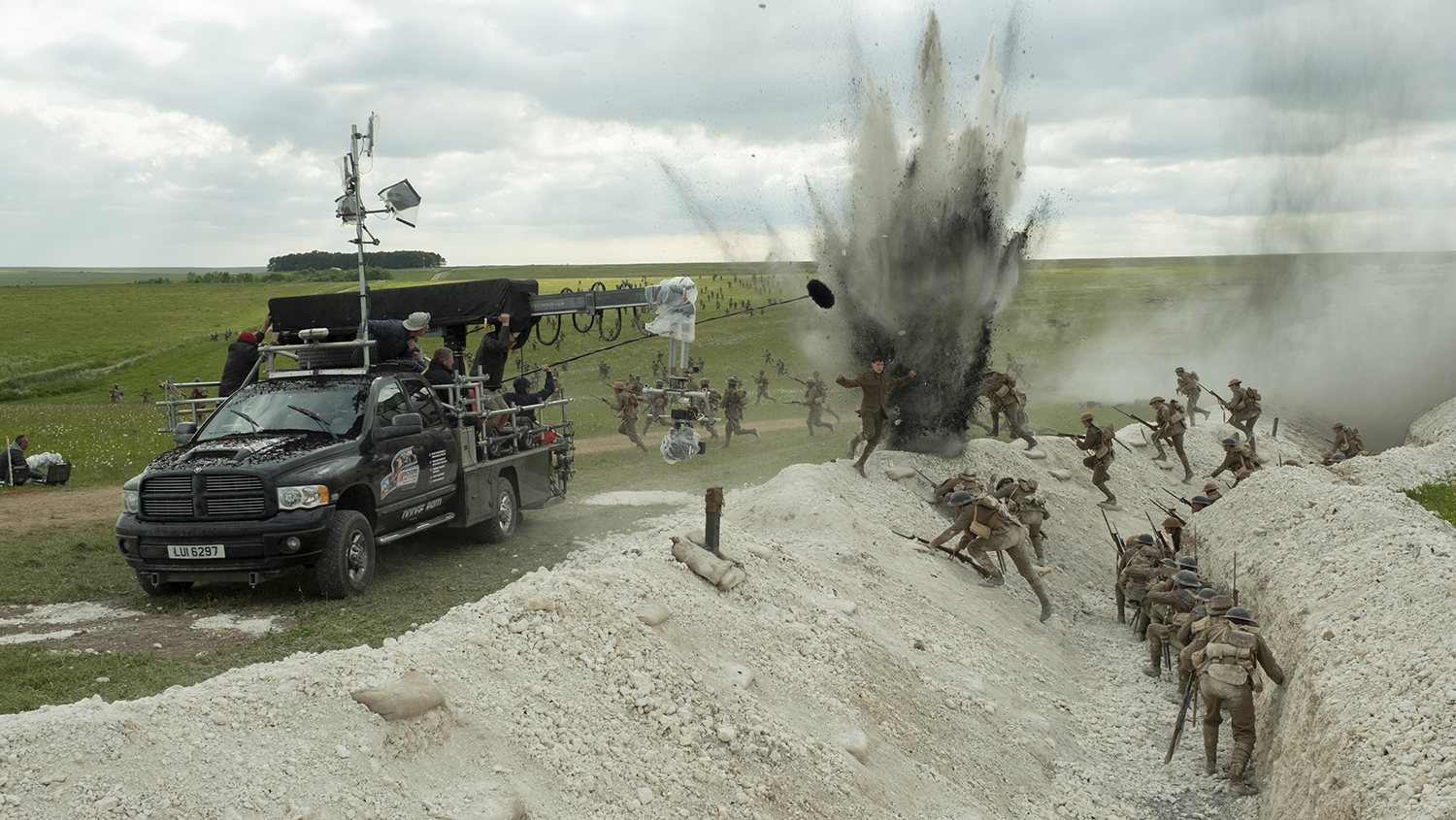 The process of figuring out how to create a narrative, not just story beat by story beat but in “segments” he could build and photograph, itself offered an enormous challenge. But Mendes indicated he wanted to ensure that the audience didn’t get distracted – even in a good way – by his cinematic sleight-of-hand. “A couple of [the transitions] probably are fairly obvious if you watch it a second time,” he said. “But I want the audience to forget about all that stuff and just watch the characters, because the reason we’re doing this is to take away any barrier between audience and story, and to not be thinking about the camera.”

“The camera doesn’t do anything self-advertising,” he continued. “It doesn’t go through a keyhole or follow the path of the moving bullet or disappear into someone’s lung or something. It observes certain rules of gravity and it stays mostly at eye level. So it’s not showing off”. Nevertheless, Mendes struggled to find the right way to “follow” his characters in a way that felt linear, visceral, and suitably immersive for a story set “continuously” against the backdrop of war-torn Northern France. “Me and [cinematographer Roger Deakins] spent months talking about how to create this movement, this dance between camera and character and landscape, all three of which are moving constantly.”

“The challenge was to justify the movement of the camera, and to never be repetitive or simply slavishly follow the man, get stuck behind them or get stuck in front of them. Because that would be repetitive and monotonous, but also would only tell half the story.” 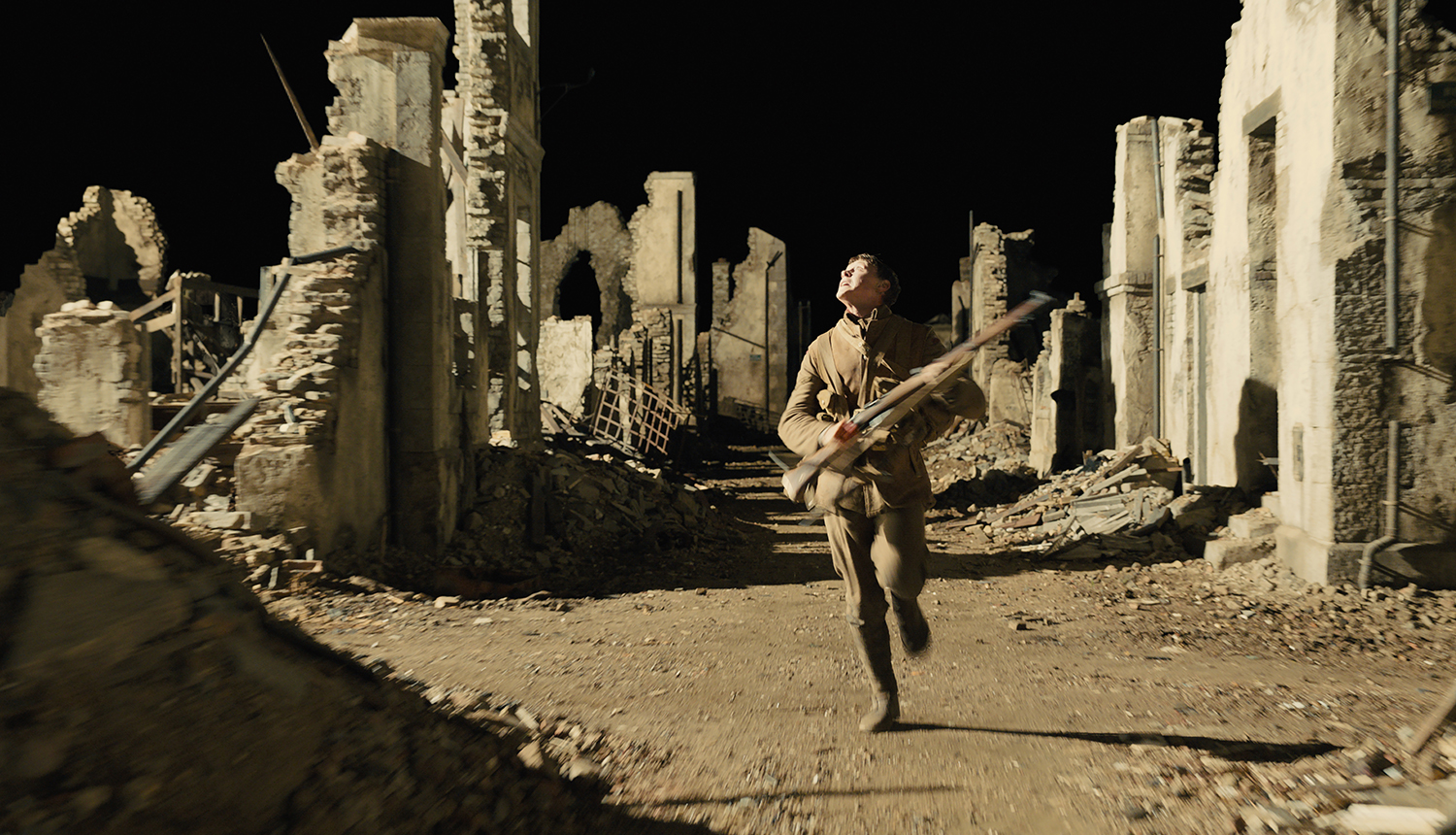 Mendes said that many of his directorial challenges emerged from the emotionality of each scene – a purposeful effort to evoke and echo the feelings of the characters as they navigate their way through hazardous terrain encountering unknown dangers. “Sometimes the camera was subjective and very intimate, but other times you could see the characters tiny on a vast landscape and you could understand geography at certain points and distance and physical difficulty, and the layout or what lies beyond,” he said. “All of these things determined where the camera moved. And sometimes even the camera detaches from the men entirely. But there’s always emotional reason or thought in the scene as to why it should behave in that way.”

Mendes releases 1917 with distributor Universal Pictures in times at least as politically volatile as those in which the film is set. But in spite of his understandable sympathies for the British soldiers who function on screen as a stand-in for his grandfather and the thousands of other young men who risked their lives in World War I, the filmmaker insisted that he wanted to avoid any overt political statements, other than perhaps how terrible and destructive war is itself. “This movie is not a history lesson and it’s not particularly nationalistic,” he said. “This story I think could have happened to two French soldiers, two Belgian soldiers, even two German soldiers. So for me it’s about the experience of war.”

“The challenge for me was to tell a story about war in which there were no obvious bad guys, but everyone is lost in the fog of war,” he continued. Mendes added that World War I marked a particularly fascinating moment in humankind’s technological advancement which he captured both as a snapshot of real history and explore as a part of his story. “The nature of this particular catastrophe was that it was so chaotic. It was the beginning of modern warfare – a war that that started with horses and cavalry and ended with machine guns and planes and weapons of mass destruction. And at the same time, there was no commensurate development in communication. They couldn’t even communicate with someone 20 yards away, but they could kill someone 2000 yards away.” 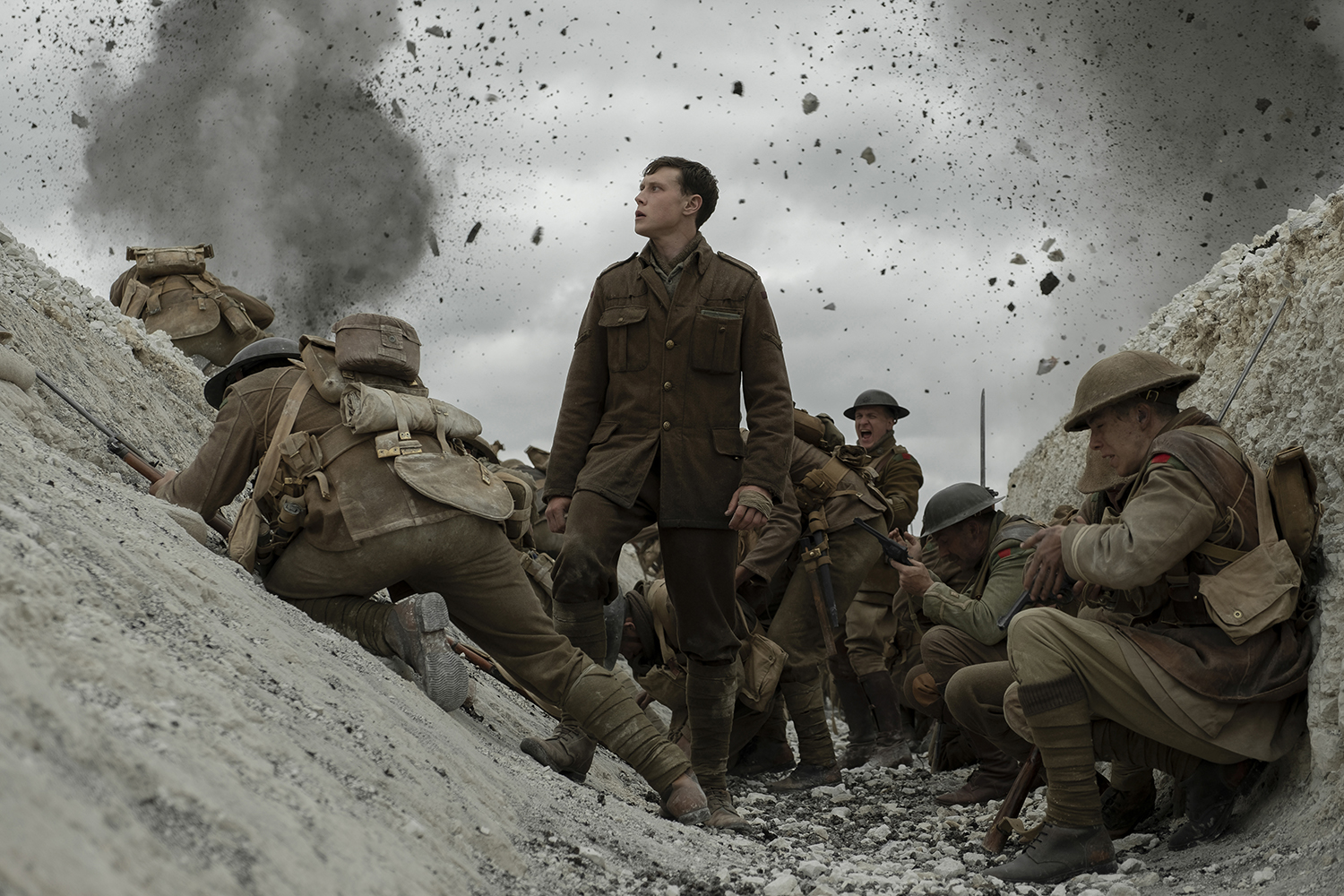 For modern audiences (much less Mendes), that’s an almost incomprehensible juxtaposition. Ultimately, that’s exactly what the filmmaker aspired to explore in 1917 – a simple truth about survival forced upon individuals facing unimaginable, seemingly inevitable danger: rely on their training, scan the horizon, and live in the now. “I was very conscious of making sure the audience understood how difficult it was to actually intuit what was real and what was what was lies. You don’t know what the truth is, and neither did the men. And that was something very important to me.

“It was about putting people inside the human experience of the war, and forcing them to live in the present tense.”