Ranking the 13 Hottest STAR WARS Villains of All Time - Nerdist

Ranking the 13 Hottest STAR WARS Villains of All Time

When it comes to Star Wars, there’s something for everyone to love: multiple heroes’ journeys across generations, exciting action which includes both space battles and lightsaber fights, and something really important: extremely hot villains.

Star Wars boasts a deep roster of slimy, dastardly villains which represent varying degrees of both evil and seduction. There’s an inherent allure to being bad: the freedom to do whatever you want, coupled with unlimited power, unchecked anger, dangerous ambition, and a disdain for anything moral. Having a dark side is supremely attractive because it goes against everything we’re taught. It’s hot because we know it’s wrong–same goes for being with one. But who is the sexiest Star Wars scoundrel? Let’s check in with our leaderboard. 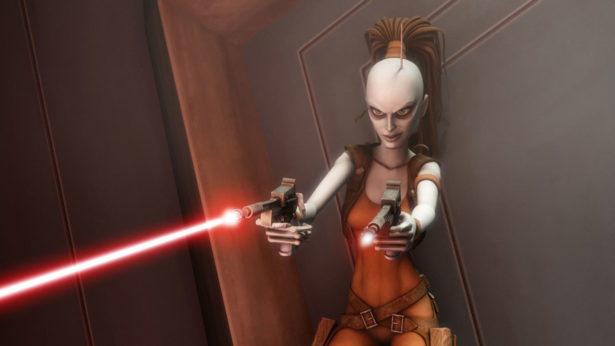 Aurra Sing is one of the deadliest bounty hunters in all of Star Wars and definitely one of the best styled. Her fiery red hair and extremely functional outfit full of tools and weapons matches her cold, pragmatic personality. Aurra never felt guilty about a kill, and that sort of ruthlessness is hot. Aurra’s also got some really nice arms. What kind of weight lifting does she do? I want that tone! One of the Empire’s most loyal officers, Rae Sloane is tall, dedicated, and bold: she’s not afraid to tell Darth Vader what’s on her mind. Rae Sloane knows who’s boss, and it’s her. She’s ambitious and powerful, and knows how to get the job done. This kind of efficiency is impressive and attractive: she knows what her needs are. 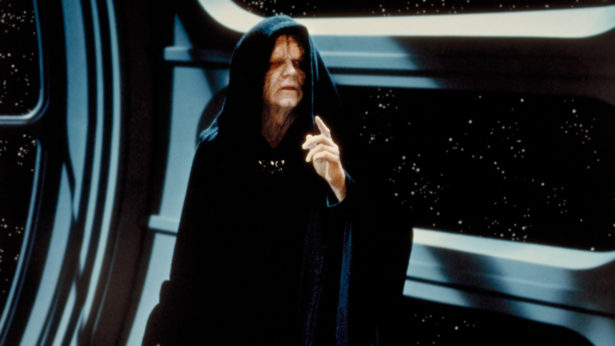 How do we ignore the appeal of the Emperor himself, Sheev Palpatine? Sheev is extremely persuasive, charismatic, and politically savvy. He’s got power where it counts: the floor of the Galactic Republic, turned Imperial Senate, turned First Galactic Empire. Palpatine is ruthless, detail-oriented, and patient: all important qualities in a romantic partner. Plus, this guy is a great storyteller, and will whisper sweet nothings in your ear all night long. Have you ever heard the tragedy of Darth Plagueis the Wise? Let me just say this now: if Arihnda Pryce ever makes a live action appearance, Cate Blanchett needs to play the role. Arihnda’s getup is extremely reminiscent of Cate’s costuming as Irina Spalko in Indiana Jones and the Kingdom of the Crystal Skull, and it is a statement. Her immaculate haircut and tailoring speak volumes about her confidence, which is the most attractive quality in a person. Arihnda is close with Thrawn, demonstrating that she’s tough, but easy to work with. Into it. Though Grand Admiral Thrawn has never appeared in the live action Star Wars films, he’s all over the old EU books, a new canon novel, and has popped up for some episodes on Star Wars Rebels. But what makes him hot? For starters, he’s a badass military strategist who is also super strong. He is thicc and ripped in all the right ways, and is stone cold in the personality department. Thrawn could throw you over his shoulder with ease, and then leave you early in the morning to get back to work. Emotionally unavailable, strong and silent, highly competent leader? Hot hot hot. 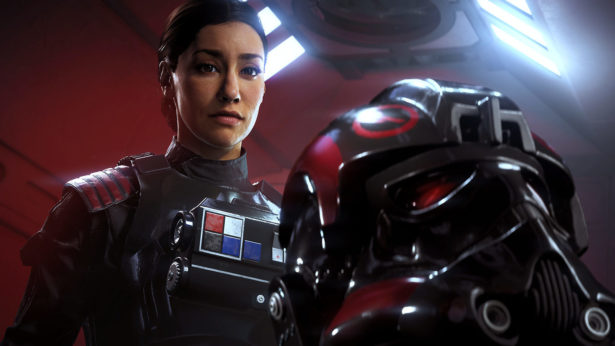 Although Iden eventually defects to the Rebellion, she starts off as a badass Imperial spy who leads the Inferno Squadron. I mean, it’s in the name: this is one hot lady leader. Iden is  a passionate, skilled pilot,  dedicated soldier, and brave leader. She is strong and has amazing, deep eyes. Both sides want her fighting with them, and both sides want to BE with her.

Let’s talk about Hux’s full name for a second: Armitage Hux. How does a person named Armitage Hux not end up tied for second in command of an oppressive, deadly galactic regime? Hux makes the hot list for a couple of reasons. First, he looks good in all black. Sure, it accentuates the pastiness, but for whatever reason, it works. Second, Hux had a couple of really good zingers in The Last Jedi, and nothing is sexier than a sense of humor. I do have some notes for his speeches, though. 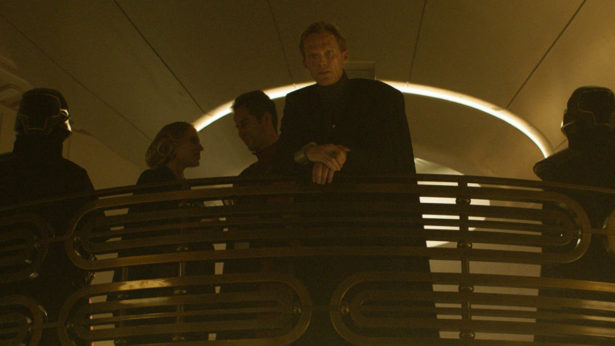 Keeping things in the pasty arena: Dryden Vos. We don’t know a ton about Dryden Vos yet, besides the fact that he is played by Professional Handsome Human, Paul Bettany. Based on the trailers and promotional materials for Solo, Vos also has some really cool and badass scars all over his face, which make him look distinguished. He’s described as a “big shot gangster,” and he and Emilia Clarke’s Q’ira have some serious sexy vibes going on between them. Mysterious? Check. Power in the seedy underbelly of the Star Wars universe? Check. Smooth British accent and a scary weapon that looks like the blade of a hockey skate? Check and check. Sign me up for his crew.

Current Star Wars canon is sparse on the lady villain front, but Phasma is an important entry. Constantly underserved and underutilized, Phasma has amazing taste in fashion and design. Her chrome getup and side cape are iconic, and she carries herself with such swagger and authority. Although she makes a couple mistakes at work, she is an intimidating, awe-inspiring presence. And she’s so tall! Phasma’s definitely got game. When Darth Tyrannus recruited a bounty hunter to make millions of clones who would serve as soldiers in the army that would initially fight *with* the Jedi only then to turn against them and slaughter them in droves, Tyrannus picked a guy with a great face. Jango Fett has strong features, pouty lips, cool, mysterious facial scars, and an awesome accent. He may be a simple man, trying to make his way in the universe, but I would like him to make his way to my bedroom. (I’m sorry.) That cape. Those gloves. That hat. That crisp Imperial dress. Orson Krennic is wholly motivated by his career, and that kind of ambition is attractive. Krennic is distinguished, but still has an energetic spirit. He’s driven, a little self-indulgent, and not above some light bragging. Krennic is a hard-working, entitled dick, but that’s what makes him hot. He’s like that guy in your class who you would always try to beat to the answer, and you always hated him for being so smart and smug about it.

Thanks to a horrific accident, Anakin/Vader is literally the hottest Star Wars villain. Darth Vader is one of the most compelling villains of all time: he became evil in a failed attempt to save the love of his life, only to become good at the very end of his life thanks to the love of his son. Redemption arc aside, nothing was hotter to my 12-year-old sensibilities than the idea of a guy going to the Dark Side in the name of love. All the angst, misplaced anger, and weird smiling Hayden Christensen does made him one of my first crushes. He has a really nice smile and a good voice. It’s just unfortunate George Lucas had to make him use sand as a flirting device. I have been on the Kylo Ren/Ben Solo train since it was announced in April 2014 that Adam Driver was cast in The Force Awakens. See below for that receipt: Kylo Ren is one of the most dynamic characters in all of Star Wars. He simultaneously grapples with the intense pressure of his Skywalker and Solo genetics and the power of the Dark Side. Quite frankly, this level of internal conflict is intoxicating. The burden that accompanies feeling like you deserve to be a Chosen One, but constantly regretting your poor choices is appealing. He’s got a lot of issues, and he’s vulnerable: this is extremely hot.

Another aspect that makes Kylo the hottest Star Wars villain is how he mirrors Anakin. The possibility of a bad guy turning good is truly irresistible. Kylo can also monologue like no one’s business, and is extremely good at fighting, flying, using the Force, and teetering on the edge of existential despair for two full movies.

Kylo also has a killer combination of perfect hair and deep, soulful eyes. And he is swole. I mean, Rian Johnson said it best: Adam Driver looked good and he knew it. Kylo has a ripped bod and a soft spot for strong ladies. All I’m saying is if Kylo asked me to join him and rule the galaxy together, I would have said yes.

Whatever happens with Kylo Ren in Episode 9, I’m excited to see more of him, and I can’t wait to see what other hot villains Star Wars will bring into our lives and hearts. But who do you think is the hottest Star Wars villain?