10 Years Without A Justice League: For The Man Who Has Everything - Nerdist

10 Years Without A Justice League: For The Man Who Has Everything

Justice League, and its sister show Justice League Unlimited, were on the air until 2006, which means it’s been 10 long years without one of the great superhero cartoons. Bruce Timm, Paul Dini, Dwayne McDuffie, and the rest of the creative staff brought to life some remarkable characters and moments that I can’t help but miss. DC’s rich cabal of characters has had some rough times in recent years, but they’ve long earned my heart over the best attempts of the Marvel juggernaut. Seeing the trailers for Dawn of Justice has made me especially yearn for the good old days, so I’m looking back on some of the best episodes Justice League ever brought us. (So of course, some spoilers follow.)

First, though, a brief background for those who’ve never seen the cartoon: it was the culmination of what came to be called the DC Animated Universe, a continuity between both story and style that crossed over between several shows. Batman and Superman had previous shows that would often feed plotlines into Justice League, but Wonder Woman, Green Lantern, Martian Manhunter, Flash, and Hawkgirl quickly became established favorites of their own. When the show added “Unlimited” to the title, its focus shifted a bit, expanding the Justice League to over 50 members and allowing the show to showcase lesser-known DC characters. No matter who was in the spotlight, though, the show would always find a new way to alter, question, or expand on their personality. 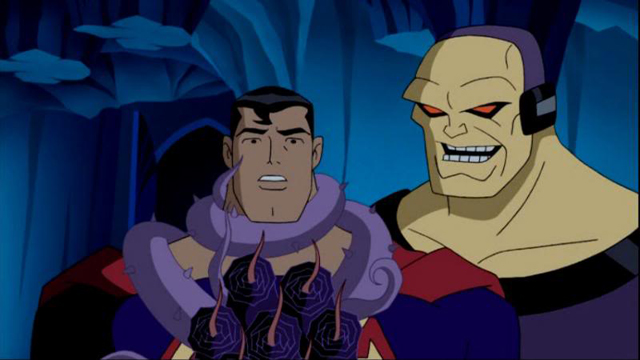 In “For The Man Who Has Everything”, that spotlight lands on Superman. It’s his birthday, and Batman and Wonder Woman are on the way to the Fortress of Solitude to give him presents. It’s a disarmingly cute premise, but it turns dark quickly when they arrive to find a parasitic plant attached to a comatose Superman. Suspecting someone’s broken in, their fears are confirmed when Mongul attacks them and gloats over his accomplishment. Superman is being fed a perfect hallucination of his greatest fantasy by the plant, known as the Black Mercy, and he’s not ever going to wake up.

Superman is a tough character to write. With few weaknesses and many strengths, it’s easy to make his adventures cheesy and repetitive. Luckily, this story is based on one from the legendary Alan Moore, and is smoothly adapted for the show by J.M. DeMatteis. Like many good Superman stories, it’s more of an interior conflict than an exterior one. The Black Mercy gives Superman a life where Krypton never exploded, where his father and mother are still alive, and, without an Earth to protect, he is allowed a loving wife and son. Even mortal enemy Braniac is an eager-to-please robot assistant here. To escape, Superman has to destroy all this. He has to make everything he ever wanted unreal. 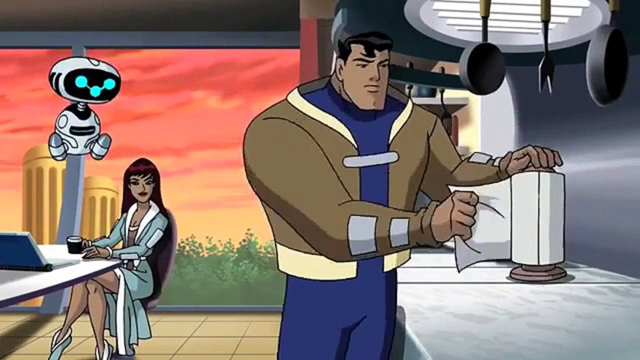 Cleverly, Moore and DeMatteis show that Superman is a son of Earth as much as Krypton. Even in his deepest personal fantasy, he is a wheat farmer, rather than a scientist like his father. His wife is Loana, a very apparent blending of Superman’s great human loves Lois and Lana. And even Jor-El’s voice at one point becomes that of Jonathan Kent’s. It quickly becomes apparent that Superman will unravel his own hallucination, despite Batman’s attempts to remove the plant himself. But that doesn’t make the end any less heart-wrenching. As Superman comes to the tearful realization that everything around him is a lie, he tells his son that the day he was born was the happiest day of his life. The happiest day of Superman’s life isn’t real.

One of the great strengths of Justice League is its abilities to shade characters even in small ways. Wonder Woman is not nearly as strong as the alien warleader Mongul, but she selflessly leaps into battle alone to protect the even more outmatched Batman. She steers the battle away from him and the comatose Superman, even as she becomes increasingly hurt. Mongul himself has returned for revenge from a previous Justice League episode, and his continuing obsession with power tints his perspective on everything. He honestly believes Superman’s fantasy would involve ruling the Earth like a king, and when subjected to the Black Mercy himself, we hear nothing but screams and explosions in his dreams. Batman, when exposed to the Black Mercy, imagines his father brutally beating the crook who shot his parents in real life. It’s a dark moment that suggests Batman’s issues boil down to a simple desire to just cripple that first criminal that got away. 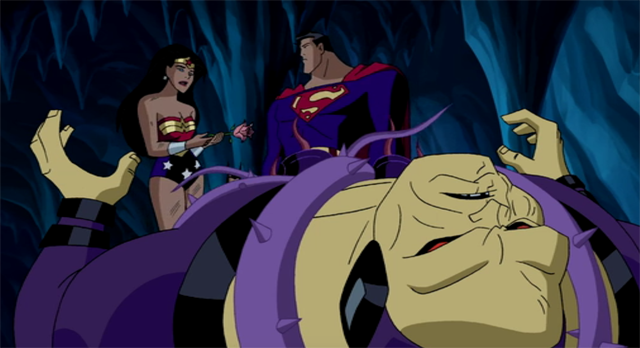 When the battle is over and Mongul is incapacitated, Superman finally gets his birthday presents. Batman brought cash, because “what else can you get the man who has everything?” Wonder Woman bred a special rose for him, which she named “The Krypton”… but it was crushed to pieces in the melee. It’s the ultimate bitersweet ending. Superman will never have what he truly wants, as it was gone before he ever even saw it. But he has people who love him, who want to fill that gap in his heart, who see past the invincible alien and to the very human and hurt man beneath.

I’ll return soon with my take on “Double Date”, but in the meantime, we’d love to hear your Justice League memories in the comments!