10 Years of Saving The World: A Look at the Pandemic Family of Games - Nerdist

10 Years of Saving The World: A Look at the Pandemic Family of Games

We’re counting down the days International Tabletop Day 2018, happening this year on April 28th! As we get closer to the big day, we’ll be looking at the gamut of tabletop gaming, from the stories of the games we play to remarkable people who love them. Be sure to join in on the fun on April 28th on our official ITTD Twitch Stream, hosted by Ivan van Norman and donate to charity:water, the worthy cause we’re supporting this year.

It’s been 10 years since 4 unnamed diseases were unleashed on the world. Since that moment, thousands of gamers around the world have put Pandemic on the table in an attempt to save humanity from these cube shaped viruses. These past 10 years have seen the world of Pandemic grow and adapt. From expansions to spin-offs, Legacy sub-franchises and dice games, Pandemic has proven itself both timeless and resilient in the face of a quickly changing industry.

What makes Pandemic so popular and so exciting? I reached out to designer Matt Leacock to get his thoughts. The first thing he mentioned is its wide accessibility. “It has a relatively simple rule set, plays in 45–60 minutes, keeps everyone active and engaged”. More important in my opinion is that, “it offers escalating moments of hope and fear that really draw you and your team in.” Much of this fear comes from the infection deck. I’ve played a lot of board games, but I still think the Escalation mechanism in Pandemic is one of the best examples of a mechanism that reinforces the setting through gameplay without relying on narrative flavor text. 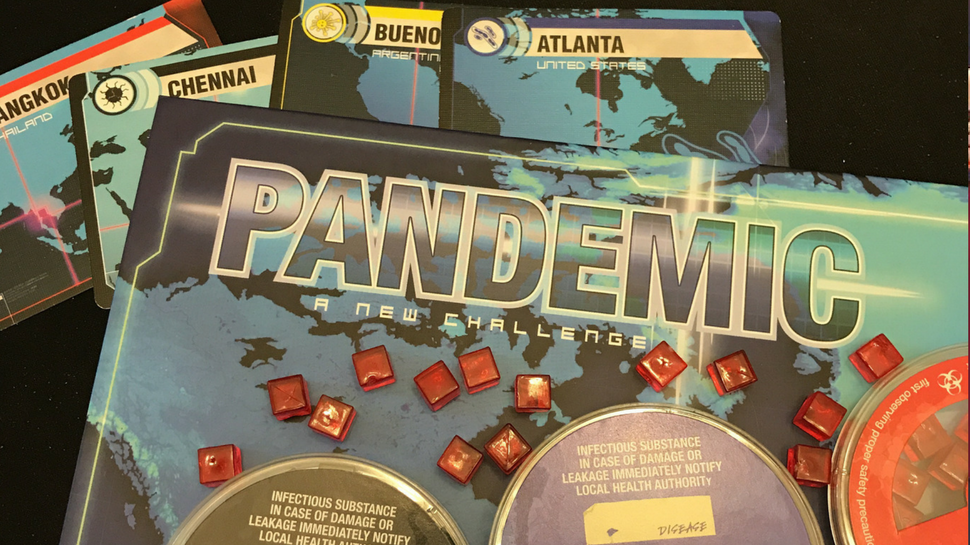 After each turn players will draw from a player deck. This deck provides you the cards you need to win the game, but also steadily delivers Epidemic cards. These cards bring with them a new viral outbreak but – more importantly – they shuffle the Infection discard pile and stack it right back on top of the deck. It’s hard to understate how perfectly this system works. Suddenly you’re faced with the realization that the cities you’ve protected are going to become problems again, and it reinforces the idea that the sick are going to get sicker. It’s a wonderful mechanism, and one that Leacock said he stumbled on by accident. Pandemic is pretty hard to begin with, but for those players looking for more of a challenge, the difficulty can be increased or decreased by changing the number of these Epidemic cards in the deck.

For those who really want to play as humanity’s last hope, the On the Brink expansion brings with it an extra Epidemic card. In addition to a pile of new event cards, this expansion also introduces the Bioterrorist traitor role, changing the experience from a cooperative game to 1-vs-many. This player gets to secretly travel the board while actively releasing disease everywhere they go. In the Lab and State of Emergency are two more expansions that both tweak the base game in different ways. In the Lab provides an alternate way to cure diseases that involves playing cards to a side board to sequence viral DNA and create cures, while State of the Emergency provides scenarios to play through. There’s even a Cthulhu-themed version of the core Pandemic experience, with its own set of tweaks. 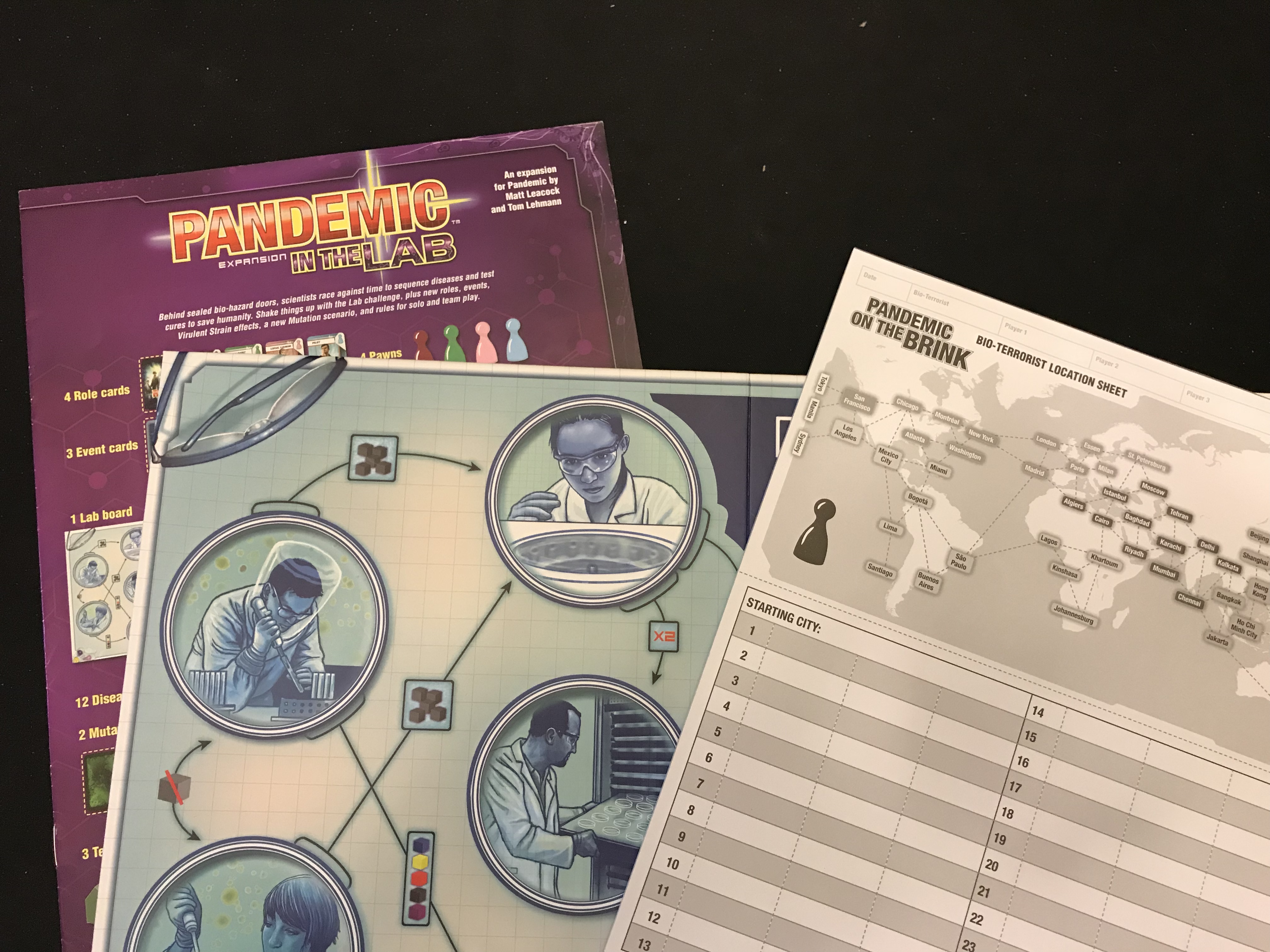 When Pandemic: Legacy Season 1 was officially announced and put up for pre-order, it began blowing expectations away. It was without question the hottest game of Gen Con that year and it rocketed up BGG’s ranking. I interviewed Rob Daviau, Leacock’s co-designer on this series, a couple of years ago and he was very excited by its success. He said he’d always wanted to be a DM for everyone in the world and saw the Legacy mechanic he introduced with Risk: Legacy as a way to do that.

In Pandemic: Legacy Season 1, players begin their story with a familiar game of regular Pandemic but things change dramatically and quickly. Common to all Legacy games is the idea of Permanence. The decisions you make and the actions you take will etch themselves into your game. These games involve stickers, markers, and other forms of permanent change so that your 12 month story is different from everyone else’s. Cities will fall, suffering permanent effects from too many outbreaks. Characters – now named – may even die. At the end of the game you have a board you can keep playing on if you would like, but due to the events of your game it will be a wholly unique version of Pandemic. 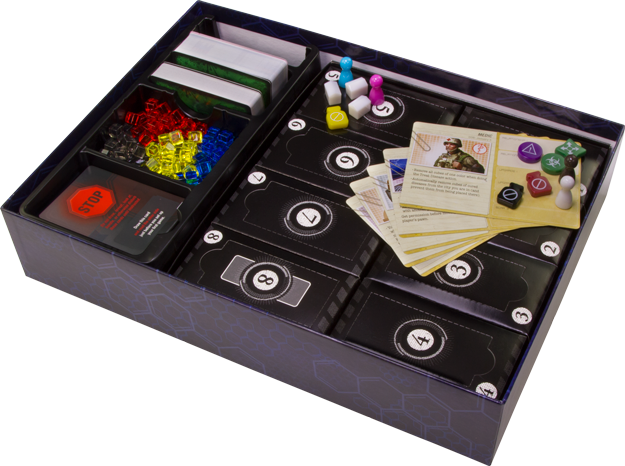 Pandemic: Legacy Season 2 is a departure from the familiar formula of saving the world. This one is a true sequel; it picks up 70+ years after the (possible) events of Season 1 with players attempting to reconnect a post-apocalyptic world ravaged by disease. It isn’t disease you’re trying to eliminate but resources you’re trying provide to beleaguered cities. I can’t say too much – spoilers – but I love the Pandemic: Legacy series and look forward to each season, ready to binge play like it’s Stranger Things weekend.

Like Legacy, the Survival Series is a line of designer collaborations. Each year Z-Man holds a Pandemic Survival Series World Championship in a different country, and each year Leacock works with a designer from that country to create a new edition of Pandemic.

The first game in the series is Pandemic: Iberia. This game takes us to Spain and Portugal – the Iberian peninsula – in the time of Cholera. While the formula here is similar to regular Pandemic, the time in which its set inspired some devilish twists. Movement is much harder for the players if they’d like to move inland. There’s the option to lay down train tracks which can pay dividends at the end of the game but the immediate cost is high. There is also a new system involving water tokens that allow players to preemptively help areas by providing clean water. Add in a few included variants to simulate moving population, or to imitate actual diseases and you have my favorite version of Pandemic besides Legacy. 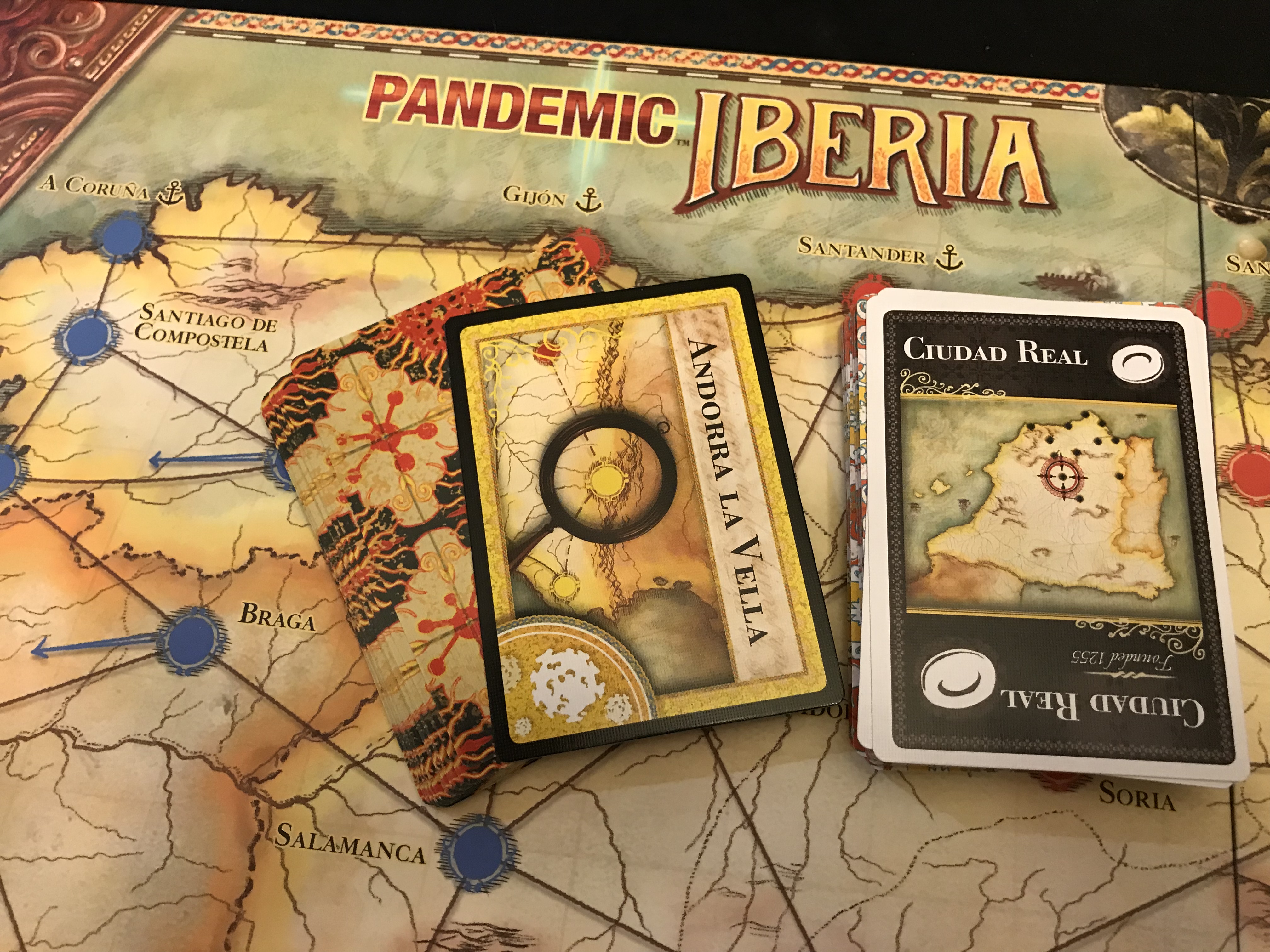 The 2nd in the series is a dramatic departure from the norm. Co-designed with Jeroen Doumen of Splotter fame, Pandemic: Rising Tide takes place in the Netherlands. Rather than attempting to cure disease, players are trying to hold back the waters of the North Sea from flooding inland and drowning the island. Many mechanisms will feel familiar, but Rising Tide is a heavier title. Water flows which requires clever barricading by building dikes. Pumping Stations can help lower the water level, though you have to monitor the route by which water flows to ensure they can be used. The water system provides constant pressure and amps the tension, but it’s important to note that this is a heavier title that may be less approachable than some of the others.

A third unannounced title in the series is upcoming. Leacock says that he’s “quite fond of the design [they] have lined up”; he also says his favorite title is the one he’s currently working on. He says he enjoys working with co-designers, saying that “they all bring different skills, perspectives, and ideas to the table. They also make great sounding boards and help ensure quality.” Judging by how they’ve been able to keep this familiar formula fresh, I’m excited to see what’s next.

What’s your favorite Pandemic-family game? Tell us in the comments! And be sure to join us on April 28th on Twitch for our International Tabletop Day stream hosted by Ivan van Norman, and help us support charity:water to raise money for a project to get water to a community of people who currently lack access to clean water.

Ready to Save the World?