This week marks the 40th anniversary of Grease, the big screen adaptation of the Broadway musical tribute to 1950s rock n’ roll Americana. The Randal Kleiser directed film, which cemented stars John Travolta and Olivia Newton-John as movie icons forever, became the most successful live-action movie musical all of all time upon its release, and is still known by movie fans the world over. But there are many tidbits regarding the making of this classic that you probably were not aware of. Here are 10 odd facts that you probably didn’t know about the making of this cinematic classic.

1. Many of its songs didn’t come from the stage musical

Grease was a phenomenon when it was released, becoming the biggest musical blockbuster of the decade, and four of its songs became huge Billboard hits. The songs “Grease” by Frankie Valli, “Hopelessly Devoted to You,” “You’re the One That I Want,” and “Summer Nights” all became top-10 hits, but only “Summer Nights” originated in the original Broadway show. The other three songs had been written specifically for the film. After the movie became huge, later stagings of the musical incorporated the songs from the movie.2. …and many elements from the stage musical were taken out of the movie

Just as several songs were added to the soundtrack specifically for the movie, many songs from the original play were excised from the final film except as background songs, most notably, “It’s Raining on Prom Night,” “Those Magic Changes,” and “Freddy My Love.” Fox’s Grease Live in 2016 restored most of these songs to the show. Other major changes from the play is moving the location from Chicago to California, Sandy Dumbrowski into the Australian Sandy Olsen, and changing the Burger Palace Boys into the T-Birds.

3. Grease was the film debut of a familiar sci-fi star 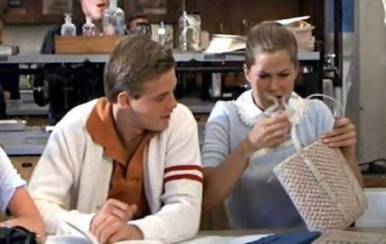 A very young Michael Biehn, best known to sci-fi fans for his roles in James Cameron movies (such as Kyle Reese in The Terminator, Corporal Hicks from Aliens, and Lt. Coffey in The Abyss), made his film debut in Grease in an uncredited cameo as a Rydell student. He gets punched in the stomach in the basketball court scene.

4. A freaky coincidence links Grease and the passing of Elvis

In an eerie coincidence, the last scene filmed for the movie was the scene where Rizzo and the Pink Ladies sing “Look at Me, I’m Sandra Dee” in Rizz’s bedrom during the sleepover. In the scene, Stockard Channing sings a verse about Elvis Presley and looks lovingly at an Elvis photo on her wall. As it turns out, Elvis actually died on the exact day this was filmed, August 16, 1977. Elvis was actually offered the role of the Teen Angel, but he turned it down, and was played by Frankie Avalon instead.

5. John Travolta “stole” a song from one of his costars

In the play, “Greased Lightning” was Kenickie’s signature song, and thus it was originally supposed to be sung by actor Jeff Conaway. But John Travolta ultimately convinced the movie’s producers to let his character of Danny Zuko sing it instead. It’s said that Conaway was not super thrilled about that change of plans.

6. Olivia Newton-John dressed Sandy herself in that scene

Sandy’s super tight black pants she wore in “You’re the One That I Want” actually belonged to Olivia Newton-John herself. They were actual vintage pants from the ’50s, and she had to be sewn into them when her zipper broke on set during filming.

7. Danny Zuko was almost played by the Fonz

If you think today is just a huge nostalgia fest for the ’80s, it doesn’t have anything on the ’70s, which were filled with with huge pop culture hits based around 1950s nostalgia. Aside from Grease, there was American Graffiti, Sha-Na-Na, American Hot Wax, Laverne & Shirley, and most famously, Happy Days. In fact, Happy Days was so huge, that star Henry Winkler was offered the part of Danny Zuko, but turned it down as to not get typecast as a ’50s greaser.

8. That blurry poster in the Frosty Palace is a Coca Cola ad

Ever wonder why there’s a weird blurred out poster in the scene where Sandy and Danny meet up at the Frosty Palace? It’s because it was a Coca-Cola advertisement, and Paramount had made a deal with Pepsi for product placement in the film, and the Coke poster had to go. But it’s done in a super glaringly obvious way that could frankly use a George Lucas style “special edition” fix to it.

9. Some Rydell High School students were in their 30s

The casting of grown-ass adults as high school students is a longstanding tradition in Hollywood, but Grease is especially shameless in this regard. John Travolta was 23 at the time of filming, Olivia Newton-John was 29, and Stockard Channing was 33. Annette Charles, who played bad girl Cha Cha DiGregorio, was 30. Only Lorenzo Lamas, who played Sandy’s jock boyfriend Tom, and who had no lines, was an actual teenager.

Just how huge was Grease? If you adjust for inflation, it would make $705 million in today’s dollars, more than modern mega blockbusters like Black Panther and Avengers. The budget was a very low $6 millon, which was actually low even by ’70s standards.

Do you have a favorite memory surrounding Grease? If so, be sure to let us know down below in the comments.