Someone Built an Exoskeleton to Wield a Giant Anime Sword - Nerdist

Someone Built an Exoskeleton to Wield a Giant Anime Sword

They’ve long been a staple of anime, manga, video games, and even some American comic books. We’re talking about those really huge swords, the ones that are just giant metal planks on a stick. Now, via Geeks are Sexy, we’ve learned about one YouTuber and “professional geek” named Allen Pan, who decided he needed to create the means to hold one of those swords himself. Specifically Cloud Strife’s Buster Sword from Final Fantasy VII. So naturally, he built himself an exoskeleton. You can watch a video of his whole process creating his sword wielding apparatus right here.

As we can see in the video, just lifting one of these 50 pound suckers is hard. Much less throwing one around in battle. In the movie Edge of Tomorrow, Emily Blunt is only able to do so because she had an exoskeleton. Which is where Pan got his initial inspiration. A few guys out there can do it, but they’re professional “strong men.” And even they can’t swing it around as if they’re He-Man. Although one guy in the video does shout out He-Man’s catchphrase “I Have the Power!” when lifting one of these swords. We can’t blame him. If we could lift it more than two inches from the ground, we’d do the same. 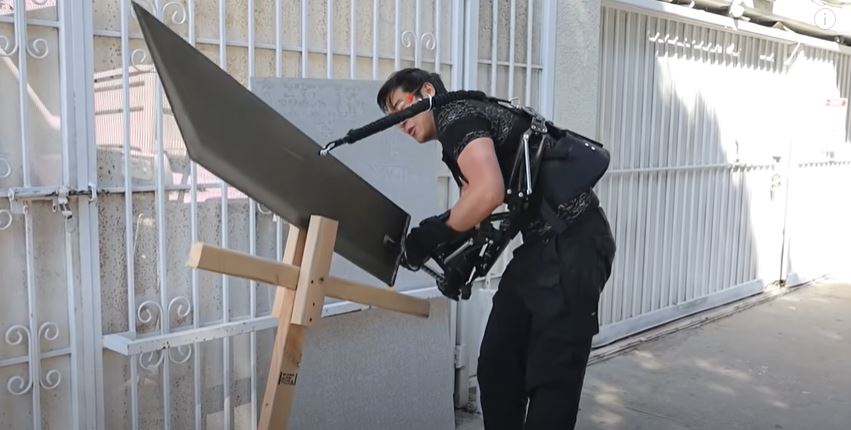 Characters have been tossing around swords like this in anime like Fairy Tale, video games like Final Fantasy, and even Marvel comics like X-Men. The mutant Magik wields a weapon like this, even though she’s canonically 120 pounds. (But hey, she’s magic. It’s in her name). Thanos almost killed Cap with one in Endgame. Well, now if you want to hold a massive weapon of your own, Allen Pan has left you a handy dandy guide for how to do so. Now, you’ve just got to find someone to actually build you a sword like this. Luckily, the internet is filled with people who do that too. We live in a gloriously geeky age.

To check out more of Allen Pan’s videos, be sure to check out his Sufficiently Advanced YouTube channel.