We love tabletop games here at Geek & Sundry, and we love to showcase the best games out there. If you want to stay tuned into what’s new and exciting in world of tabletop games, be sure to tune into Game the Game hosted by Becca Scott, with episodes going live each week that you can watch here at GeekandSundry.com.

This year’s Major League Baseball opening day is the earliest ever, as teams take the field on March 29th. Luckily for us board gamers, we can get our fix of baseball much sooner than that.

Thanks to cardboard versions of America’s Pastime, we can hit, pitch, and field any time of the year on our tabletops. Whether it’s a season-long simulation chock full of statistics that would make Bill James and the Moneyball crowd proud or a game based on the classic confrontation between pitcher and batter, there’s a game for all types of baseball fans … and even one game that non-baseball fans can sink their teeth into.

These three games are the best ways to get your baseball fix any time of the year. Peanuts and Cracker Jack are optional.

Bottom of the 9th

The heart of baseball is found in the duel between pitcher and batter, which is distilled into this two-player bluffing game featuring a real-time dice-rolling element to determine hits and outs.

It’s the bottom of the ninth and either the batter wins the game by having a player cross home plate or the pitcher wins by registering three outs before a run is scored. The pitcher secretly chooses their pitch and if the batter guesses correctly, then both players roll dice in real-time to see if the contact results in a hit or an out.

With games lasting no longer than 20 minutes, Bottom of the 9th by Greater Than Games is a quick and easy way to experience the thrills of a last-gasp victory or heart-breaking defeat.

Even non-baseball fans love this game, thanks to its unique combination of deck-building, baseball, and science fiction. Set in the not-so-distant future, Baseball Highlights: 2045, published by Eagle Gryphon Games, captures the excitement of a baseball game populated not only by Naturals (humans), but Cyborgs (part robots) and Robots. Most are hilariously named after real-life ballplayers: Babe Bench, Willie McGwire, and Barry Sosa are just a few examples of the game’s comedic touch.

Each player starts with a basic team of 15 players, with six used for one game of a best-of-seven series. Players take turns playing a single card, which may trigger several events that may or may not lead to runs being scored.

Between games players upgrade their teams by sending rookies and veterans to the minors to be replaced by higher-priced and more powerful free agents. With only six cards played during each matchup, you get all of the exciting baseball highlights without any of the mundane filler. 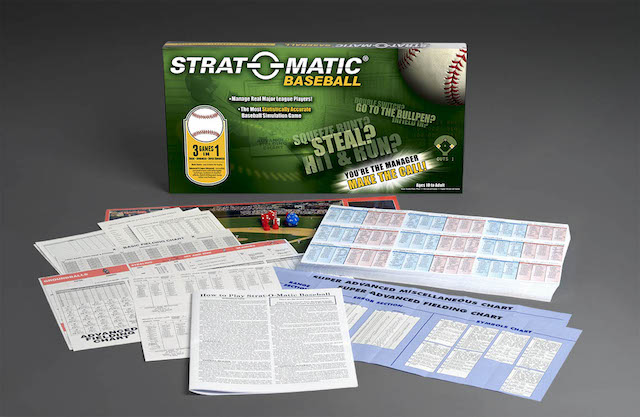 Before there was fantasy baseball, this classic was the de facto way for gamers to recreate major league action. First published over fifty years ago, Strat-O-Matic Baseball is still going strong and each season’s new-cards release is a cause for celebration amongst its fans, as the company opens its warehouse to the public to buy the latest set of cards.

Players take on the role of managers in this old-school roll-and-look-up-results battle of wits. They pick a team, set lineups, and make all of the key strategic decisions during the game using stats-filled cards and charts for each player and six-sided dice.

With hardcore fans having been known to recreate entire 152-game seasons all from the comfort of their dining room table, this is the ultimate stat geek’s game.

Do you play sports-themed games? Tell us in the comments!