What Dungeons & Dragons Means To Me - Nerdist

What Dungeons & Dragons Means To Me

Have you watched the last Talks Machina episode of 2016, yet? If not, you really should. Every Critmas episode is amazing to watch, but this one is especially so. Near the end, Foster and the Critical Role cast share a compilation of videos sent in by Critters talking about what Critical Role has come to mean to them in their lives.

Critical Role has most definitely been inspiring to me, online and off. The majority of that inspiration comes by way of the one thing I have in common with the folks of that show: Dungeons & Dragons.

I started playing D&D back in March 1980. I talked my mother into buying it for me, or at least I initially thought so. I’ve come to learn since that she probably bought it for me because she saw I needed something to do. A few months earlier, my father had died. In a rare parental moment, I think she saw some possible futures for me that weren’t going to be positive unless I had something to focus on. So, for my birthday, she spent $15 hard-earned dollars and bought the game for me. And focused I became. 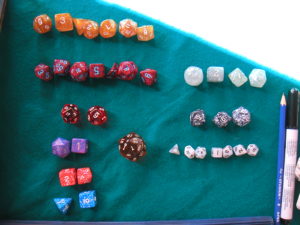 Mesmerized is a better word, I think. D&D was the friendly next door illithid, and I became its thrall, entranced by every word, every map, every stat table, and every marvelous die. Through that summer, I filled my Trapper Keeper with pages of character sheets and dungeon maps on graph paper. Self-built mental walls cracked, broke, and collapsed as my fantasy thoughts were freed to a degree ordinary books didn’t achieve, and I began to write. I wrote character details and backstories, room descriptions, weapon information, and suddenly I was writing entire dungeons, then whole modules. And I had yet to actually play my first real game.

Once the new school year started, I quickly found a couple friends to play D&D with, and boy, did we. As D&D became more popular, we found and made more friends to game with, and soon a solid group came together that would last almost until high school graduation. Those seven years were sorely difficult for me, having to find ways to care for my younger sister, protect my mother from abusive relationships, and get myself to and through each school day. Those hours and days spent writing D&D things and playing the game with those friends are what kept me grounded and able to keep on doing what I needed to and what I had to.

After high school graduation, daily life in the Army paused my D&D writing and playing time, but thankfully not for long. In the early days of the Gulf War, I happened upon a D&D group that welcomed me in. We had no manuals, dice, or modules as we played over there, somewhere in the middle of the Arabian desert. We played solely theater of the mind, our excellent DM weaving adventures that went a long way in helping us deal with the imminent future we were all heading towards.

After the war, when we had all returned stateside, we continued our D&D sessions. We had become friends through D&D, connected with each other through being soldiers, and by having shared the experience of war. But underneath all that, D&D worked its magic by helping us process and deal with the deeply-rooted issues we brought back with us. I don’t remember any official voluntary or mandatory PTSD counseling being available from the military, but it was those D&D sessions that helped me greatly. Over the next few years as I went through a divorce and the discovery and elimination of the $52K of debt it left in its wake, those times spent with D&D and friends was nothing less than a lifesaver.

Those groups of friends are long gone, but I’ve continued to play D&D. Not weekly, and sometimes not even monthly, but I’ve managed to keep it in my life. Since 2010, I’ve been playing online Pathfinder and D&D with a group of groovy dudes. We all live apart from each other, and with adulting life being what it is, we don’t get to game every week. 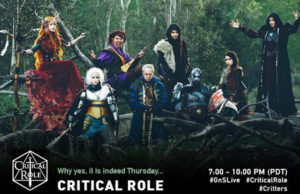 Enter Critical Role. When that first episode was posted to the Geek & Sundry website, I was there, watching intently. I was excited to see some D&D content on the site, and thought it might work better here than on Twitch. After the first episode, I had some doubts. After the second episode, those doubts were gone, and I was hooked on this show and the cast.

Critical Role is that weekly D&D session I so mightily crave. When I can’t get into a game personally, it brings me splendid comfort to know Thursday night will help satisfy that craving. Sure, I don’t get to actually play, but I do play along, as well as laugh, cry, eat, and drink, with the cast. I also get to chat with hundreds of Critters from all over the world, geeking out over the show as emphatically as I do.

Freedom for my mind. Passionate friendships. Courage and hope to face life daily. Knowing that others are having their own adventures in this silly roleplaying game. That’s what Dungeons & Dragons means to me.

What does Dungeons & Dragons mean to you? What does Critical Role mean to you? Fill up the Comments section below with your stories!