The Story Of 'Star Trek: The Animated Series' (And Why You Should Binge It) - Nerdist

The Story Of ‘Star Trek: The Animated Series’ (And Why You Should Binge It)

The holidays are a time for binges. Everyone eats massive meals to celebrate before heading out into the cold winter (or the even colder Internet) to seek out good deals for gifts. The strange combination of odd days off and worsening weather also offers some solid time in front of a screen. Star Trek fans have a lot of choices between all of the series available to them, from the original classic to the newer Discovery. Times like this are a great opportunity to check out a series that’s often overlooked when scrolling through streaming options.  Star Trek: The Animated Series (as it is now known) kept the fires burning for the franchise during the dark times between the original series and the films of the early 80s.

While Paramount owned Star Trek at the time of production, the series aired on NBC. The network kept on receiving impassioned fan mail after it canceled the original show. It also saw the success of the original show in syndication, and, after it ran the numbers of the show’s ratings through a new system that broke those ratings down into demographics,  NBC realized that Star Trek’s viewership was high with the audience that advertisers wanted to reach. It contacted creator Gene Roddenberry about bringing back the show, but they were too late; Paramount had demolished and gotten rid of the original props and sets a few months before contact. The network decided that it would be cheaper to commission an animated series rather than rebuild the sets. 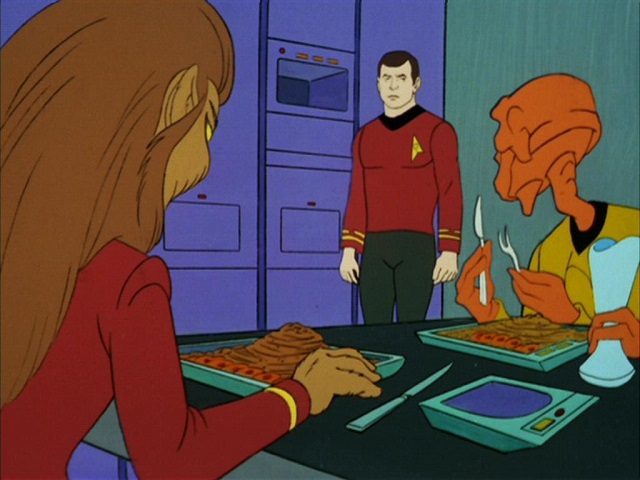 One of the other cost-cutting measures was an attempt to only hire back a few members of the cast. NBC originally wanted to hire five cast members—William Shatner, Leonard Nimoy, DeForest Kelley, James Doohan, and Majel Barrett—with James Doohan and Majel Barrett working double duty as Sulu and Uhura. Leonard Nimoy backed up his fellow crewmembers by refusing to join the show if all the original cast members weren’t hired back to do their own voices. A compromise was eventually reached with everyone save Walter Koenig brought back aboard the Enterprise. The animated show also allowed more opportunities for exotic aliens to become part of the crew. M’Ress, voiced by Majel Barret, was a Caitian engineering officer who also often substituted for Uhurua at communications. Arex, voiced by James Doohan, took Chekov’s place at the navigation console from time to time.

Walter Koening wasn’t completely locked out of Star Trek The Animated Series. He wrote the script for the epsiode “The Infinite Vulcan” becoming the first original crew member to contribute in that fashion to the franchise. His episode features a (literal) big bad guy who is a clone of a Eugenics Wars scientist that keys off of the background of Khan. Many of the episodes key off of moments from the original series that either callback or are direct sequels to those stories. Harry Mudd shows up to vex the crew again, and Spock uses The Guardian of Forever to encounter his younger self. Each of these episodes was 24 minutes long, allowing for all the heart, storytelling, weird effects and earnest dialogue of the predecessor series in half the time. The show ran for two seasons from 1973 to 1974 for 22 episodes. 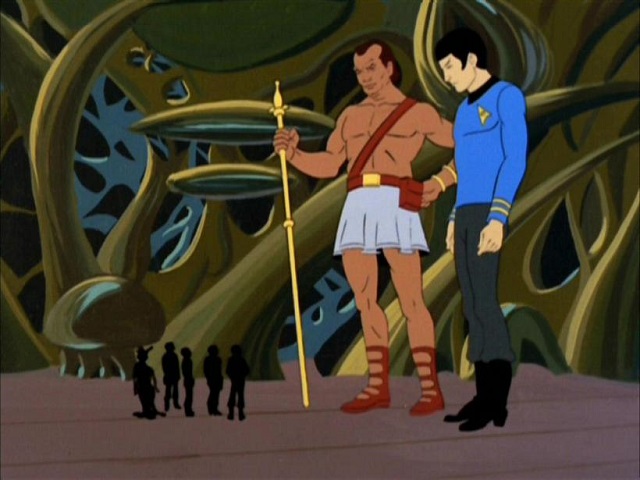 Whether or not Star Trek The Animated Series is still part of the canon is a matter open up for debate. When Roddenberry took stronger control of Star Trek after Star Trek: The Next Generation was in production, much of the elements from media outside the movies and series were put off-limits for the writers to use. Some elements made it back in before the cut-off; this show features a holographic rec room that seems like an earlier version of the holodeck. Slowly but surely after Roddenberry’s passing, other pieces of the animated series made their way into official stories, like mentions of Edosian flowers, Robert April as the first captain of the Enterprise and Spock’s younger self facing bullies retold in the opening minutes of the Star Trek reboot. The release of the series on Blu-Ray and DVD is considered by many to be a tacit admission of the show returning to an official status. Regardless of that status, it’s a great way to get a solid original series feel in half the time, a place for Star Trek Adventures GMs to find inspiration, or a palate cleanser between all the other streaming catchup fans are doing in the upcoming weeks.