The London Sights Every Sherlock Fan Must See - Nerdist

“It is a hobby of mine,” Sherlock Holmes once said, “to have an exact knowledge of London.” Or, as the contemporary BBC version said many years later: “Just put me back in London. I need to get to know the place again, breathe it in – feel every quiver of its beating heart.”

Whether you’re a lifelong native or a first-time traveler (and whether you prefer Benedict Cumberbatch, Robert Downey Jr., Basil Rathbone, or Jeremy Brett in the eponymous role), London has plenty to offer any Sherlockian.

Here are the top London must-sees for every Baker Street irregular or amateur consulting detective: 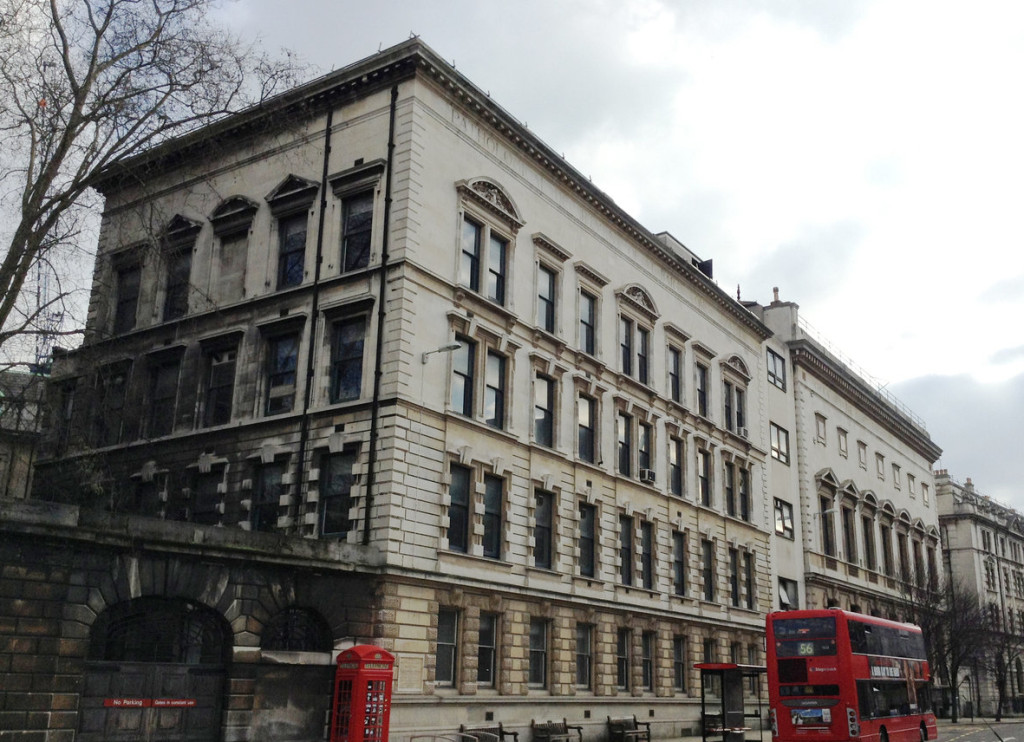 Start where it all began! In Sir Arthur Conan Doyle’s first-ever Holmes story, “A Study in Scarlet”, Sherlock Holmes and John Watson meet for the very first time at St. Bart’s hospital — a momentous literary occasion that recurred onscreen in BBC Sherlock and is marked today by a commemorative plaque in the hospital museum. 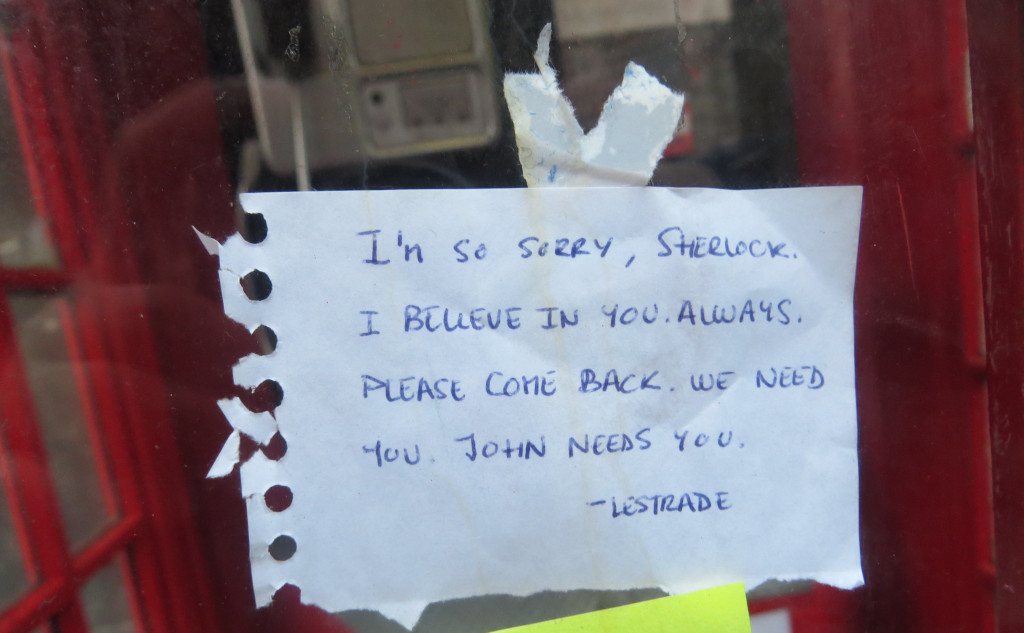 And of course, no viewer of BBC Sherlock could stand outside St. Bart’s and not envision Sherlock perched on the edge of that rooftop. In the two year wait between seasons after “The Reichenbach Fall”, fans left notes on the phone box in front of the hospital, and you can still read some of them today… 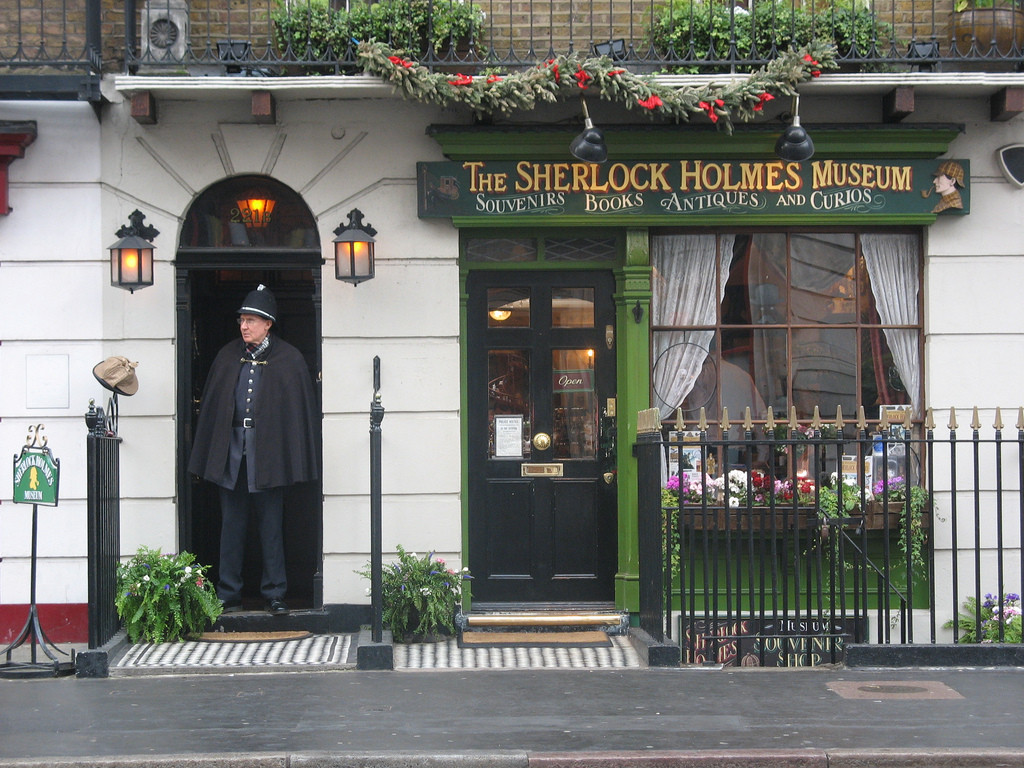 No Holmesian trip to London would be complete without stopping by 221B Baker Street, still thriving today in homage, complete with a Sherlock Holmes statue right outside the Baker Street underground station.

The Sherlock Holmes Museum occupies the infamous fictional address, and actually has a full-time employee whose duties consist exclusively of answering the 40-100 letters sent to “Sherlock Holmes” per week. The museum is set up to look as if Holmes and Watson were actually still living there in the period between 1881 and 1904, and it’s only £8 to enter. 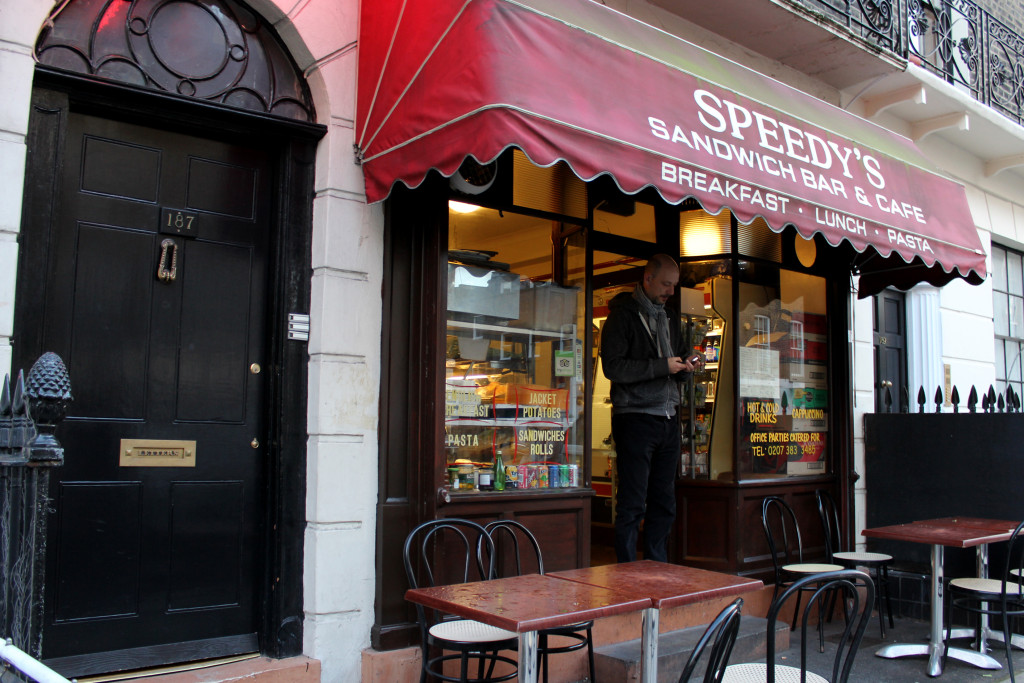 Down the street from the real-life Baker Street is the modern imitation version on Gower Street, used by the BBC Sherlock production team in order to avoid all the Sherlock Holmes tributes flooding the real thing.

The familiar red awning of Speedy’s Cafe marks the next-door flat used as the 221B exterior on the show — head inside for a cup of coffee or delicious full English breakfast while admiring the fanart and production photos that the cafe has hanging inside, fully embracing its status as a Sherlockian pilgrimage site. 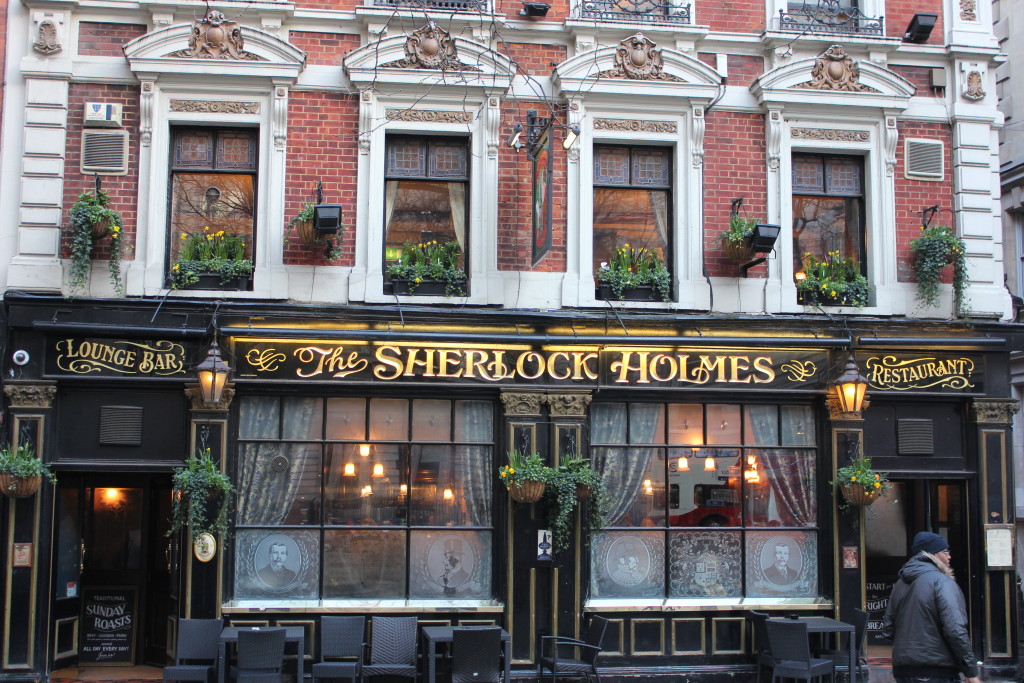 If you’re in the mood for some classic pub fare, it doesn’t get any more classic than the Sherlock Holmes Pub, which functions as a permanent exhibition centered around a replica of the Baker Street sitting room — with the blessing of the Conan Doyle estate, no less.

Upstairs from the first floor bar is an intimate covered roof garden and restaurant, with views of the sitting room wherever you’re seated. Try the Hound of the Baskerville Toad in the Hole, or the Robert Downey Jr. Baked Camembert if you’d like something a little cheesier. 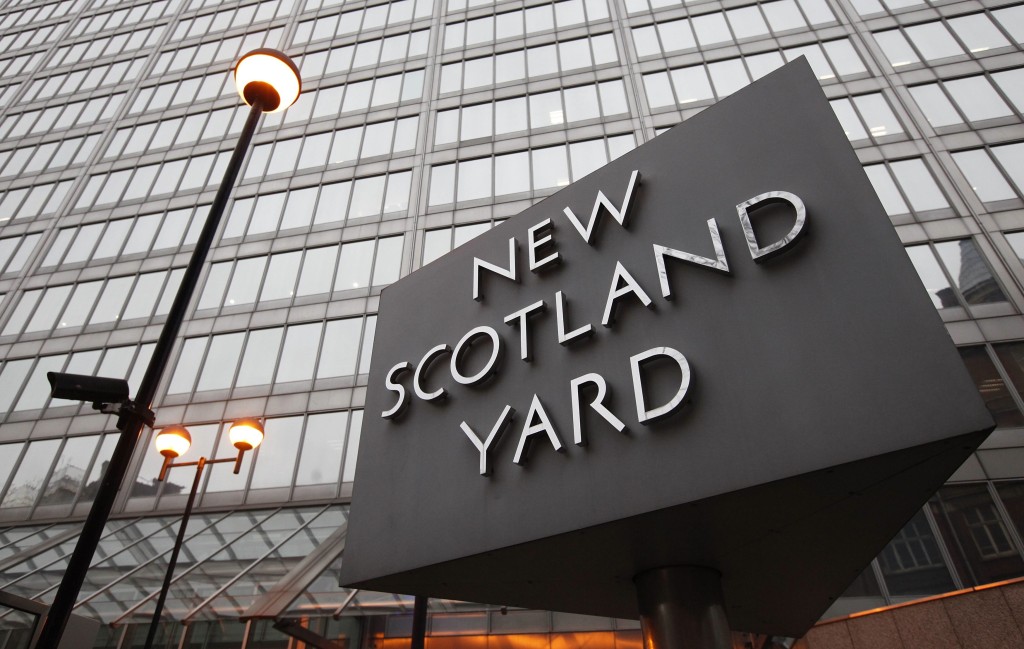 The original Great Scotland Yard headquarters of the Metropolitan Police Service moved to New Scotland Yard in 1890, back when Victorian Sherlock Holmes would have still been assisting Detective Inspector Lestrade. Now, in the age of computers, their IT system is named the ‘Home Office Large Major Enquiry System’, or HOLMES, and their software training program is called ‘Elementary’.

In the BBC series, Cumberbatch’s Sherlock is often seen entering the Victoria Embankment building, which is — we regret to inform you — explicitly off-limits to the public. It’s still worth a visit to the iconic exterior, however. 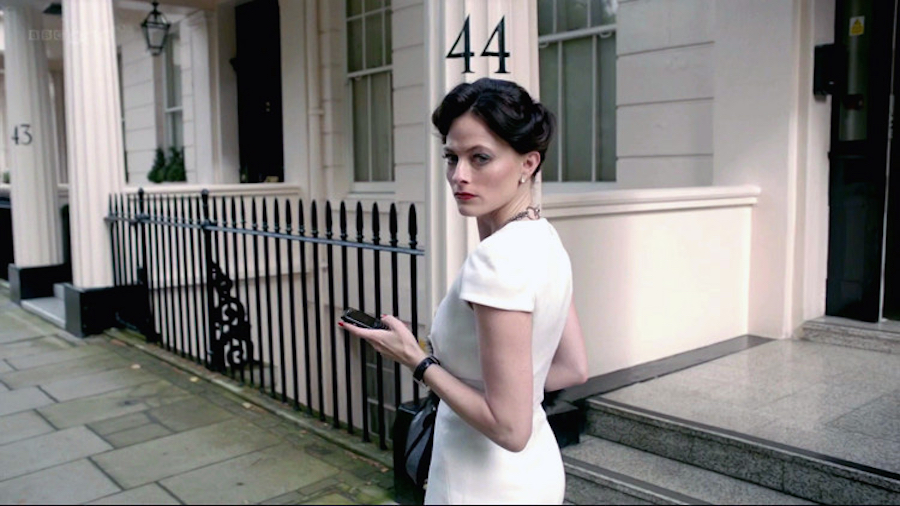 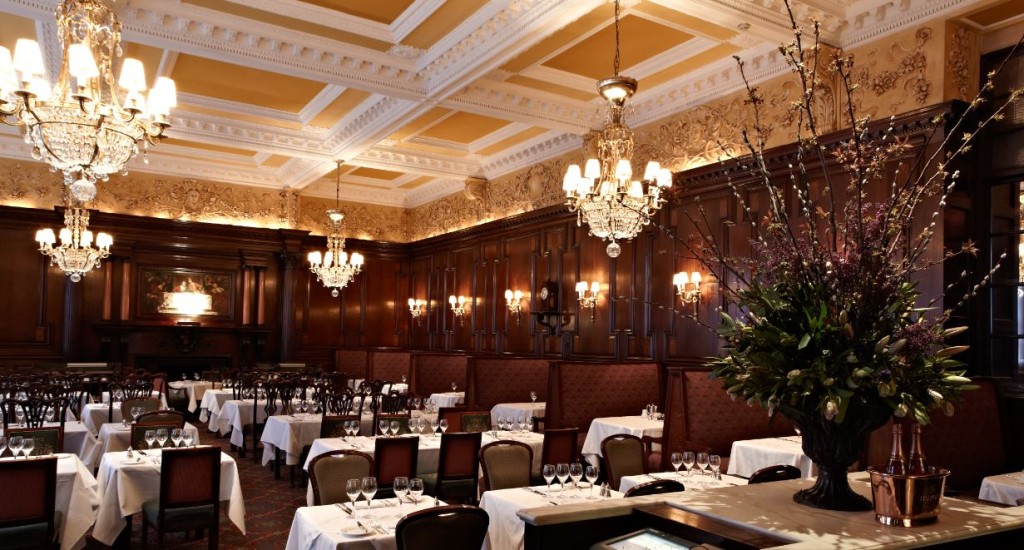 Holmes and Watson were regulars at this historic tavern near the Savoy, with Watson at one point referring to it as “our Strand restaurant” and Holmes telling Watson after fasting for three days, “Something nutritious at Simpson’s would not be out of place.”

Dress well and prepare for an elegant fine dining experience — Simpsons is old school in every way, and their menu of classic British fare remains timeless since the 19th century: much like Sherlock Holmes.

What are some of your favorite Sherlock Holmes related spots around the world? Let us know in the comments!