GM Tips is our series to help Storytellers and Game Masters improve their craft and create memorable roleplaying experiences. The GM Quick Tips are single hacks discovered in the minds of storytellers everywhere.

Mass combat has always been a tantalizing idea for storytellers, but difficult in execution. Two (or more) armies waging a lethal battle with all the magic at their disposal. It certainly makes for ran an epic backdrop to highlight the player’s actions, but once the characters get involved as generals it often falls apart. Most game systems are designed around 3-to-6 second combat round and this mechanically falls apart once you get into big armies. Long term spell effects or other crazy class features that can be used endlessly spark fun conversations, but make running mass battles hard.

Typically, storytellers will simply make the rest of the battle a cinematic backdrop and let the players do small scale or goal-orientated missions on the field. This works very well if the outcome of the battle is already predetermined, or you have multiple tables that can each hit some major objectives. Some game systems (like Legend of the Five Rings or D&D) have books and chapters dedicated to running large combats, but it is easy to get lost in the mechanics. So here’s a quick way to run mass combat between armies that are system agnostic. 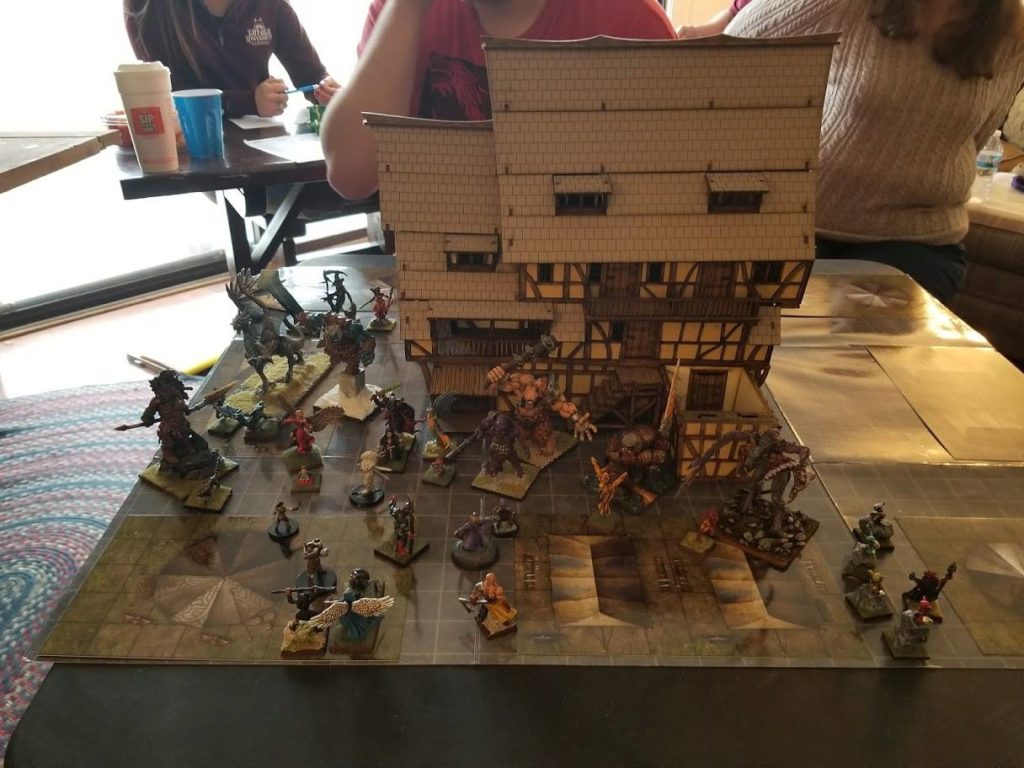 Your first step is to write down the two “generals” and their army size. The generals could be a council of wizards on one side versus a single war veteran on the other and let’s say they each have an army size of 100,000. Give each general an arbitrary leadership score based on your game system and gut feeling. In D&D you might use their charisma modifiers while in Vampire: The Masquerade you might simply use their leadership score. Finally, determine general army advantages and simply increase the generals’ leadership score by a flat amount based on them. If one army has more magic they might get a +2 if another has better-trained soldiers… add +2 to that general’s score. Even army size can be a factor! Be as robust or as simple as you prefer, but you don’t need to over complicate yourself.

Next, you want to write down each main “player” on each side of the battlefield. This step is really fun and where this system shines. The “enemy” side gets a mini-hero to match each of the main armies and they can be as custom as you want or as simple as “battle wizard 1” (of course the more flair you add, the better it is). You don’t need to have their full stats, just use their “leadership value” on your note sheet. It will be different than their generals and everyone should have some variety because your players will have variety as well. If the characters have allies and enemies, this is a great spot to slide them in as well.

The war begins! At the start of the first turn, have all the listed characters (but not the generals) roll their leadership score versus the other. Again, your specific system determines how this is rolled, be it a simple D20 with a modifier, or a bucket full of D10’s. Go through the whole list and record what each person rolled. You aren’t looking to total them up, just simply if they bested their “opponent”. Each mini-victory adds a simple +1 or +2 modifier to their generals’ dice pool. Finally, using all the modifiers have the two generals roll against each other. The winning side loses 5% of their army, and the losing side loses 10% of theirs, plus an extra 5% if the roll was particularly lopsided (i.e. one general rolled 30 and the other 5). This entire turn takes about 1-hour of in-game time for the party, and most armies are typically routed when they lose 40% of their troops.

All said this is a very simple way to add some gamification to the battlefield. Once you roll the dice for the party, you can play match-maker behind the screen as a GM and if you notice two people rolled the same dice you might elect to have the two generals duel. Other fun tasks could be sneaking into the reserve, or using clever party tricks to gain a battle edge. Run those tasks as you would normally in-between these combat rounds and if they are successful, give more bonuses to the respective general.

By running mass combat in this way, the players can continue to be as creative and have real battlefield impact, but also feel like they are part of a larger machine in the entire army.

What are your mass combat tips! Let us know in the comments below!