NYCTOPHOBIA - The Horror Board Game You Play Blind - Nerdist

NYCTOPHOBIA – The Horror Board Game You Play Blind

You’re sitting in a chair and all you know is darkness. Sitting upon the ridge of your nose is a pair of blackout glasses. They separate you from the outside world and what is familiar. You’re not really at a table playing a game – you’re in the woods, lost and trying to find your friends. Someone is chasing you. Your heart races.

This is Nyctophobia from Pandasaurus Games, one of the most unique designs this hobby has seen. My first brush was equal parts terror and elation which I chronicled in a feverish state. It’s easy to slip into this foreboding world you’re asked to join, and it’s easy to get lost.

Before we delve further into how Nyctophobia works, we need to wander into its background. Designer Catherine Stippel crafted this from the ground up with purpose. It was lovingly constructed for her blind Uncle. She wanted to offer an experience tailored to his needs and without restriction. The rest of us simply get to benefit from this wonderful creation. 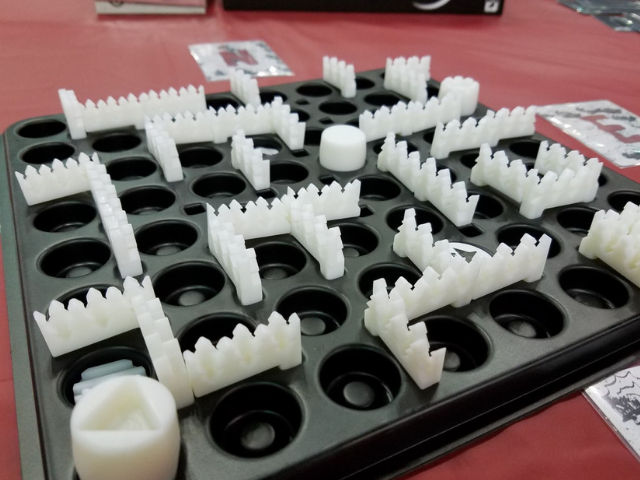 So back to what this is. This is a one-versus-many affair where the most maniacal in the group slips into the role of axe murderer. The rest are the endangered hunted, scattered in the woods and attempting to locate their car.

The experience is entirely tactile. On your turn, the hunter takes your finger and places it upon your piece. Each player has a separate pawn slotted into the board with a unique physical indentation on the top.

If you’re ever adjacent to the hunter then you receive a wound. This is extremely unsettling as a second damage ends the game. The tension is palpable as a single slip-up and it’s all over.

Play consists of each of the hunted taking a turn moving into adjacent spaces and feeling their way across the board. You begin scattered, groping in the dark and isolated. One of you must find the car and your primary tool is communication.

Constant discussion occurs. You try to identify what areas of the board no one has searched (such as the North West) and push towards the virgin ground without stumbling into the hunter. The axe murder will then move erratically.

They choose one of two cards drawn from a deck. This will have them bearing down on the nearest player or towards the last place noise was created on the board. Their card will often push them to taunt and physically scare the players. When it works it’s absolutely magnificent.

Nyctophobia occupies a very unique position. It’s part theater, part experiment, and part analog game. At its best, it transcends that last aspect and works its way into your brain. It leaves you unsettled by disturbing your comfort zone. It wants to provide a session you’ll never forget, and it often succeeds.

That trick of sensory deprivation makes for discomfort. This will bother some players and this is certainly not a title for everyone. It’s also the type of game you will not binge. Nyctophobia is suited best as a peculiar artifact that you pull off the shelf for special occasions.

And so it goes. It’s reminiscent of some of the best films in that you get to live vicariously through another’s initial encounter. 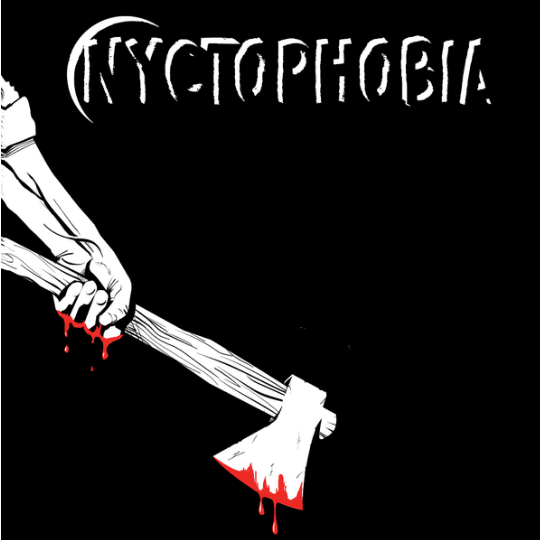 There are a few concessions that must be given. Some will find disappointment in the restricted decision process of the hunter. In truth, it’s more of a facilitator role burdened with the task of director. The book even suggests perhaps taking it easy at times and guiding towards a strong experience over cutthroat play.

Another challenge is repetition. If played frequently with the same group, the magic will fade just a tad over time. The design works to keep things tilted by offering multiple adversaries for players to encounter. In this particular set you can flee from either an axe murderer or the mage. The former will cut down trees and ruthlessly pursue, while the latter rotates the board and plays with your memory insidiously.

A second copy of the game exists with a Vampire opponent. This version is exclusive to Target and may be a little easier to track down depending on your locale. They both share the same core rules and offer a similar brand of unyielding tactile horror.

Nyctophoboa is a treat. It’s the only tabletop game that’s instilled actual fear in my bones. This is a monumental feat of innovation. I’m not sure when I’ll return to the forest, but I can feel the anxiety and tension even now.

What’s your favorite horror board game? Let us know in the comments!  And be sure to join host Becca Scott on Game the Game every Thursday here on Geek & Sundry to watch the best boardgames played with fantastic guests!