To understand Escape From Colditz, we need a little history jam session. This is an early 70s board game based on an actual escape from the Nazi Germany prison camp Colditz Castle. This is a game that for a time outsold Monopoly in Britain. It’s also a game that was co-designed from an actual participant in the escape, Major Pat Reid.

If you can’t dig that, then you need to re-evaluate life.

It’s been 75 years since Major Reid’s original escape and publisher Osprey Games is resurrecting this classic title and giving it new life. Like all of Osprey’s releases, this is a physical beauty. All-new gorgeous art, top notch graphic design, and a host of component touches that are historical replicas make this stand out. The pieces are stored in a faux Red Cross care package and we’re given foldouts of propaganda and German wanted posters for the escapees. There’s even an included pamphlet detailing the history of the prison and adding to the atmosphere.

This is five-star class and does wonders to elevate the entire product into an experience. You’ll want to paw through the bits and take it all in as you imagine the extreme situation these POWs went through. It’s thrilling at an emotional level and instantly generates a reverence and respect that causes you to approach this game from a different angle; this isn’t Monopoly, Ticket to Ride, or even Memoir 44. 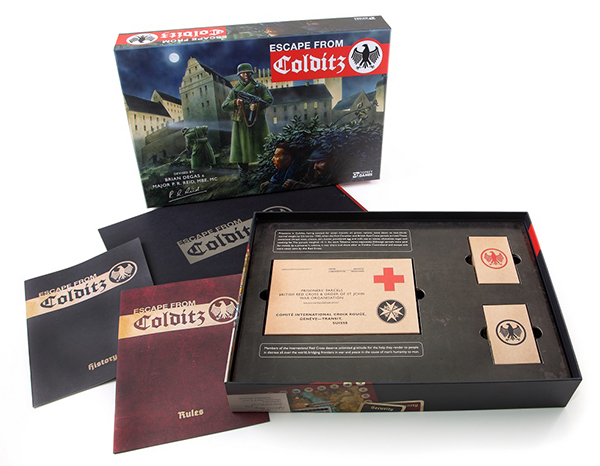 Osprey has performed some contemporary massaging to gameplay elements as well. As the foreword in the rulebook suggests, they did so with extreme care and caution. The effort is outstanding as they went so far to include the original rules in the back of the manual to preserve that historicity.

The game itself operates on a rather unique plane of being crammed with all kinds of little excellent detail while still weighed down by a clearly old school demeanor. This is an early thematic design that features one player controlling the German prison guards and up to four more managing different nationalities of escapees. The inmates can coordinate and share equipment, but only one of them may actually be declared winner so it has a sly semi-cooperative element that was far ahead of its time.

Both sides of the conflict are interesting as the POWs work to assemble gear and stow away contraband to ready their escape, while the Wehrmacht soldiers wall off and capture errant inmates. It’s very asymmetrical in feel and you will want to try both sides to get the full scope of what the design has to offer.

Where Escape From Colditz succeeds is in embracing its narrative arc. The game tells an interesting story as you move your prisoners into different rooms within the castle walls to acquire gear. You’ll use rope, wire cutters, and keys to breach the two layers of walls and make a break for it.

The details are fantastic as you’ll crawl through tunnels, clip the outer wire, maybe even steal the German Officer’s Staff car and drive out the front gate. The vectors of escape and little touches encountered will vary due to cards drawn and situations in play. It makes for an exciting story as you scale down a couple of walls and gun it full speed with guards in hot pursuit.

Where the game stumbles and gets caught up in the wire is when its age rears its head like a tunneler breaking through the fresh earth. This is a roll and move game where you’re counting small spaces. It works but it can lead to reliance on luck. The game throws you a bone by offering card draws when you roll particularly poorly, but you’ll really want to hit some high rolls to bring out those dramatic opportunities. 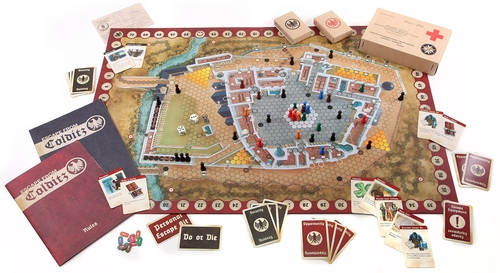 While the overall length of the game isn’t too prohibitive the pacing isn’t quite there. The early part of the game where you’re grabbing equipment can be very mundane for the German player as you mostly sit around. The POWs can math out their rolls and minimize their risks so that you have little to do or respond to. It’s in their best interest to spend maximum time building their gear and the winding down of the clock is the only element of pressure.

When they eventually make their move for escape is when the game gets going like a Steve McQueen driven motorcycle hitting a 60 foot leap. At some point you cut over and go for it, scaling down a wall and running for the fence. Usually it’s a chain reaction and several attempts occur at once. This is thrilling and the culmination of that early work and rising arc can pay off superbly.

There is an occasional problem where the guards will pull off a dreaded card combo like a Killshot and take out an escapee or two. Since the game requires a player get two of their POWs out to win, you can have that crescendo cut down as if you abruptly yanked the cord on a symphony at their most brilliant moment. The fact that escape equipment is single use and the narrative arc can be completely reset is a real problem. It’s also one that’s not seen in contemporary designs. This really highlights the inherent dichotomy and how you must approach it.

This is a game whose charm and personality are built around its presentation and context. There are moments where you’re hitting that final sequence of John Sturges’ The Great Escape, and there are times when you’re making a trip to the hardware store while your CD player is out and all you can do is stare at traffic. It comes down to that history and framework. If the little pamphlets and foldouts appeal, if you can get into the mind of the POWs and what they went through, then you will eat this one up. It’s beautifully portrayed and it offers genuine atmosphere steeped in a chilling experience.


Have you ever played Escape From Colditz? Would you like to see more classic board games re-released with top-notch treatment? Give us a salute in the comments!

All images courtesy of Osprey Games