HERE'S NEGAN! is the Walking Dead Dungeon Crawler We've Been Waiting For - Nerdist

HERE’S NEGAN! is the Walking Dead Dungeon Crawler We’ve Been Waiting For

Mantic Games is doing great things with the Walking Dead comic license. Their miniatures game All Out War is a fantastic singular experience that plays out as if the terrain itself is out to get you. So when I heard they were taking a bite out of that line and hitting us with a spin-off dungeon crawler, I was certainly paying attention. Here’s Negan! does not disappoint.

Let’s be clear – this is not just a repackaging of some figures and porting of the existing game system. This is really its own unique thing inspired by mechanisms found in All Out War. I was somewhat shocked to discover this is a very thoughtful and expansive board game with a great deal of content. It would have been easy for them to throw three or four scenarios in the box and mail it in, but Here’s Negan contains 12 and even lays out the groundwork for campaign play and linking your results. 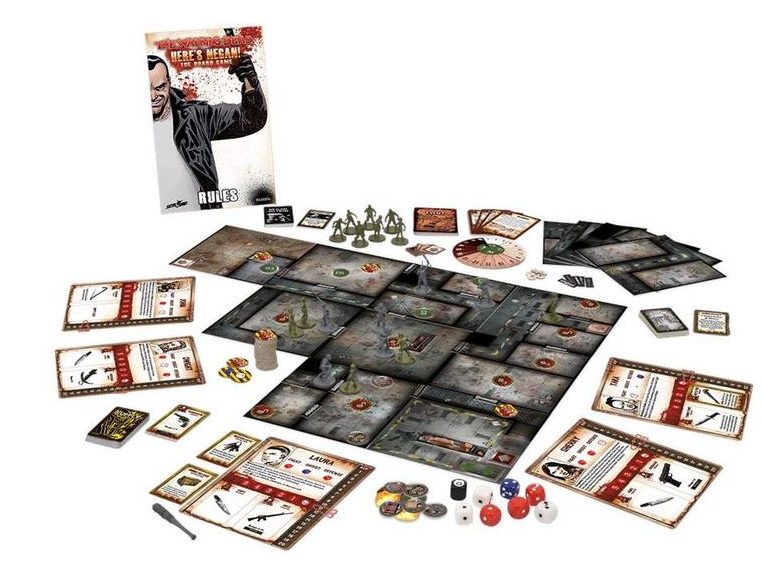 Describing this game as a dungeon crawler is absolutely correct. Players take on the role of Negan’s top lieutenants, vying for his favor while clearing out the factory that would become the Sanctuary. You lay out a series of tiles according to the scenario and then push forward to clear the walkers out of the tomb.

There’s a strong sense of exploration as you throw open a door and reference a random card draw to see what’s inside. Usually, there are undead vagrants for you to bash, but there’s also environmental hazards such as a specific instance where the room is flooded and the Walkers are submerged and hidden. As you push forward there’s a sense of mystery that is satisfying to unveil as you frolic through the carnage.

Enemy clusters of zombies are populated via blips in homage to the classic Space Hulk. Each marker will be revealed when you gain line of sight and contain a variable amount of zeds. The range here is relatively constricted, however, and you can plan appropriately.

There’s even loot as you find slick weaponry and munitions to upgrade your starting supplies. This will help you more efficiently clear out the denizens and elevate the pace. It’s important to keep your foot on the gas, as Negan’s skulking in the background and tossing out insults. 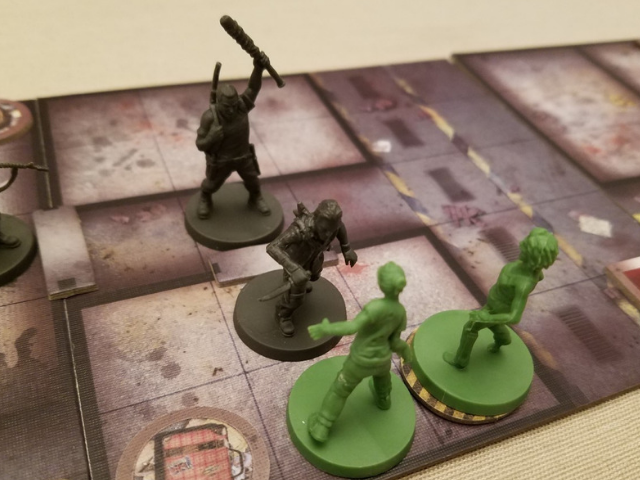 Negan is the centerpiece of this game and the most compelling mechanism. He’s represented by a figure on the board, menacingly brandishing Lucille and ready to wreak some havoc. Each turn you will draw a card to handle his activation as he pushes forward towards the map’s exit. His movement and behavior is erratic and unpredictable–just as you’d expect.

It’s time to pull on your shitting pants.

The goal here is to clear a path for the brutal leader. If you hang back or push too slowly he will give you the bat. You literally lose health as he bashes you aside and becomes enraged. This system of punishing the weak and pushing the tempo is utterly fantastic. It offers a very unique personality and separates this design from other dungeon crawlers.

Negan’s wrath also combines with the variable room contents to make up for the obvious lack of enemy variety. I was initially surprised to see a lack of different Walkers types as we’ve seen in the miniatures game, but this disappointment faded somewhat as I embraced the knife’s edge of trying to satisfy a maniac.

There’s also a bit of a controversial approach as the game embraces a semi-cooperative philosophy. While you will want to work together and help a fallen Savior sometimes, other times you will want to slam the door shut or draw a herd to a hapless stooge.

This is primarily because there is a single player at end game declared top dog. You track reputation earned mostly through killing Walkers and the brawler with the most cred gets to puff out their chest and talk shit at game’s end. It is a little awkward in that everyone wins but one player “wins better.” Yet I wouldn’t trade out this format as it leads to betrayals and selfish gambits with a properly calibrated group of misfits. 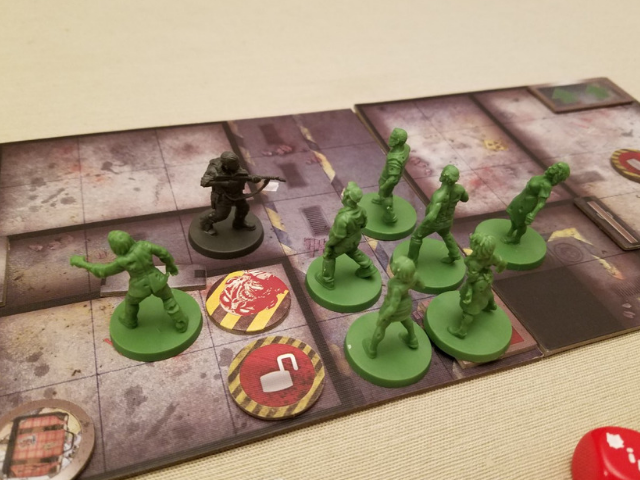 Synthesizing selfish aggression is just one of many ways fidelity is achieved. One could make a checklist and their wrist would get sore. You can be bitten and infected, Negan can shove your face into the furnace, noise is a key component to manage or exploit, and Walkers gain ferocity in numbers.

Here’s Negan! is better than it has any right to be. It’s a full-fledged semi-cooperative experience that aligns with the dungeon crawl ideology yet veers hard off course. As you’re cutting through winding hallways and braining forgotten souls, keep an eye over your shoulder and brace yourself for Lucille.

Have you played The Walking Dead: All Out War? Let us know in the comments!