Hands-On Overview: Drop It Brings Tetris to Your Tabletop - Nerdist

Hands-On Overview: Drop It Brings Tetris to Your Tabletop

Drop It by Thames and Kosmos is an odd one because I didn’t expect much from it. The concept sounds fine, sure. You drop geometric shapes down a plastic pane in a low-fi rendition of Tetris meets Connect 4. No, that’s not me yawning. 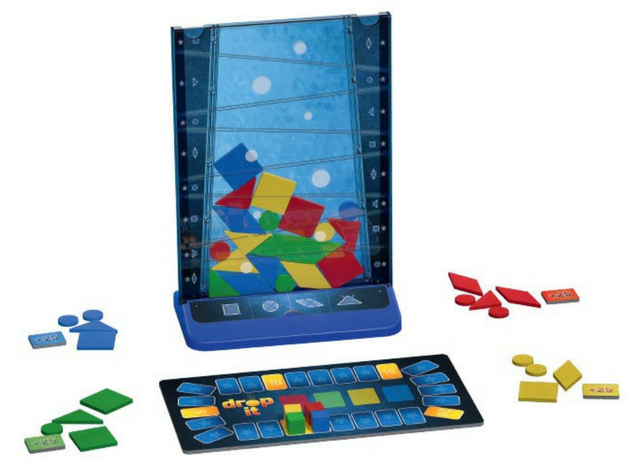 Then I saw the thing setup and my head tilted, eyes agog. It certainly doesn’t lack visual identity.

Then I played it again. “Oh. Strategy. Huh.”

And again. “Wow. There’s something here.”

You know how it goes.

Drop It is an odd duck in that it’s a dexterity game with very little physical skill. You see, you’re dropping pieces down a plastic chute. I don’t know about you, but my grandma and my four-year-old can drop a thing about as well as I can. Spending years flicking, tossing, and sliding pieces all about the table ain’t gonna help you drop a wooden shape.

This game doesn’t rely on a soft touch or accurate stroke. You’re managing a collection of circles, triangles, and parallelograms. You choose one to drop on your turn and score points based on the region it settles in – the higher vertically the more points you’ll score. This is immediately clever because it creates incentive for precise plays to land atop other pieces, as well as providing escalating tension and a catchup mechanism as late-game scoring is more impactful.

The trick, and where this game really develops a degree of strategic weight, is that your piece scores zero points if it ends up touching the same shape or a member of the same color. This means you need to avoid your own piece, as well as any player’s piece of the same form.

Decision points focus on where to drop your shape and how to avoid those traps. Additional oomph is gained by offering some circular embellishments on the plastic frame which provide bonus points if your piece is overlapping; another target to provide nuance to your vector is a solid addition. This also offers expanded scoring ranges and allows for the width of player points to expand a bit and grow more chaotic and interesting.

The beauty of this design is that it’s one part strategic placement and one part sheer chaos. Pieces will bounce and scatter off each other when colliding. Sometimes the larger shapes will push through a couple of smaller ones and land in surprising locations. Attempting to predict the wily physics of the landing and whether it will stick is the hot zone for fun. It offers those hilarious dexterity game moments where things tumble in a way you can’t predict and someone totally blows their move, yet it retains an overall sense of strategy and thought.

It’s all about risk assessment and seizing opportunities. Once some of the depth sinks into your skin, you’ll realize that the shape you select is extremely important as well. Not simply for the current move, but it has a direct impact on the latter portion of the game. There’s a similar feel to hand management in card games where you need to hold back the proper selections to provide options down the line. If you find yourself with only circles in the final sequence you may struggle, particularly if another player or two acted similarly. Clever play and keeping an eye around the corner is rewarded. 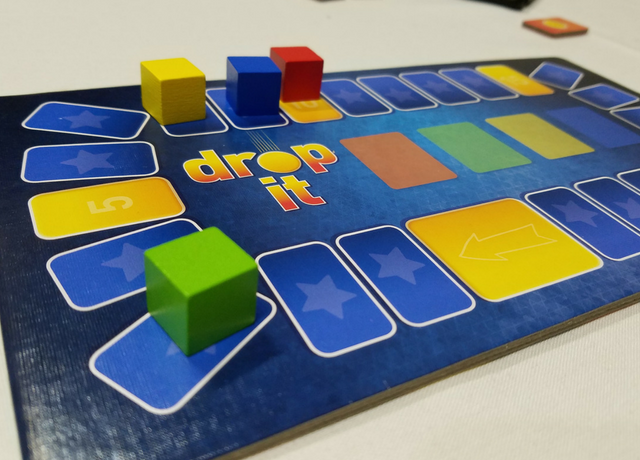 The rules are pretty simple and easily internalized by kids and adults alike. The only pit-trap to keep an eye out for is the section of the rulebook explaining the edge restrictions. When setting up the vertical chute you place a selection of cardboard frames inside the contraption. These offer penalties on certain shapes and colors, cancelling out your points if you’re touching the edge of the frame with the pictured no-no. Due to translation issues, the English rulebook can be slightly misleading as some players interpret the text to mean you get no points if that piece is in the entire scoring area. This would make the game heavily punishing and is indeed, not the case.

Drop It is pretty damn slick. I’ve shared laughs and high-fives with a group of players split by an age range of 60 years. Nearly anyone will enjoy the combination of strategy and amusing physics. To top it off, it succeeds even at a player count of two and rewards a longer examination and repeated play.

What are your favorite dexterity games? Let us know in the comments!  And be sure to join host Becca Scott on Game the Game every Thursday here on Geek & Sundry to watch the best boardgames played with fantastic guests!