GM Tips is ur series to help Storytellers and Game Masters improve their craft and create memorable roleplaying experiences. Last week, we mixed cocktails and talked about storytelling while drunk, and… now we come back down to earth—getting your large swath of NPC’s into your players’ brains.

You’ve painstakingly crafted the intricate world of Food Thrones and are ready to introduce your hungry players to the court. Every character, will in their own way, be important for future adventures or the politics and you’ve begun to introduce them. The Cinnamon King ruled with a heavy hand, the Princess of Toast was secretly in love with the Baron of Cheese. Meanwhile, the three knights, Coffee, Sugar, and Cream were all challenging the Duchess of Crumpets. Of course, the players will get their quest from the High Magus the… and we’ve lost them.

There comes a time in most games when players finally get to the court scene, or in urban fantasy settings have the infamous neutral nightclub. As storytellers, this is our chance to show the complexity of the world with fleshed out NPC’s, and offer potential side quests galore. But, how do you introduce all the characters without making your players hit the table? Personally I just wrote a novel… but that didn’t work. So I had to try other things. Learn from my mistakes.

Here is what started working.

Rattling off the description and a name of the political players and powerhouses won’t stick if the players don’t have a reason to empathize. Instead, try leading off each character with their political stance and ultimate goal. It’s one-hundred percent okay to spoil the ever-living-crap out of their motives here. You want to make a bold impact, not have a bunch of bland fuzzy characters that nobody knows.

An example of this would play out as such:

In the halls of the Mountain King, four dwarven lords sit on their thrones waiting for the players. Each of them, in turn, makes a proclamation, and a demand in order, their voice echoing off the halls and caves.

The first demands that all elves be hung and left for the crows to feast on—the child of Magbar, firstborn of dwarves.

The second begs for all elves to chop off their hands, to erase competition—Fizbar the dwarven smith.

The third holds her chest and whispers that they should starve the elves and let them waste away into nothing. —Marita, the dwarven barter queen.

Finally, the last shouts over the other, that all dwarves should have their beards chopped off for suggesting such atrocities—Yizgoth, the sleepiest dwarf. 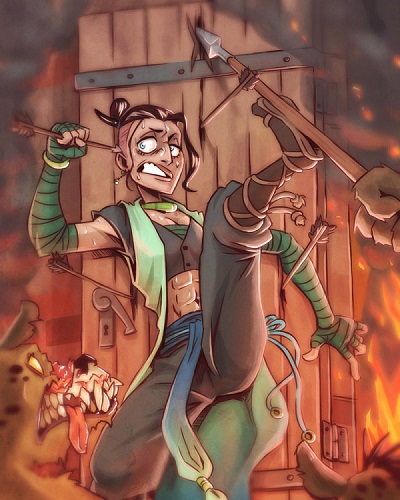 In the hallowed halls of the Technocracy, a large amalgam of scientists work to find a better path for humanity. As the players walk into the room one of the chemists Rivet, smiles and races over to shake their hand with a glass of enhanced nitroglycerin. Bumbling and falling, he tumbles into the nearest character almost dropping his vial. Seconds from certain doom he grabs the characters waist and stares into their eyes… catching the vial at the last second. Behind him, Haku with her mechanical legs, laughs and cracks jokes at this, calling for the pair to get a room before falling off the chair herself, knocking over vials of acid that scatter all over Alios…

Another tip to creating characters that people remember, is to introduce them in the midst of a chaotic scene with each other. One character fails at something and have it snowball through the rest of them in a fun story. Involve the players at every turn, having them race to save the scenario or catch artifacts before they fall. Doing things this way, you can introduce as many characters as there are players and still have everyone noticed. It’s a fun and effective way to create personality, show group dynamics, and potentially start a few romance lines.

First There Were Gods Of Law…

The final tip for large casts is grouping. You don’t really need your players to remember all the deities in Faerun do you? You just need to worry about lawful gods or chaotic gods. Good versus evil. By breaking down your NPC’s into clearly identifiable groups, you create a placeholder in the players’ memories for later. Showcase all the fancy pictures or art you want, all they players need to know is the Gods of Good are on the left side, and the Gods of Neutral are out at the taco stand.

Once players then walk up to those various groupings or explore further, you then keep small groups inside the larger. Among the Gods of Neutral, you find those Gods who like tacos, and those Gods who don’t like tacos. Clearly, we all know here which Gods need to have their deity status removed. You can break things down into three groupings before you finally want to introduce the core NPC. At that point, the players are very interested in just that person, without having to worry about everyone else’s details.

What’s your method to introduce large casts of NPC’s? As a player have you had any bad experiences? Tell us your experience below!

Featured Image by: Council of DeathLords by Rachel Perciphone for The Seventh Age

Image Credits: Wizards of the Cost Forgotten Realms Monsters by Conceptopolis and Beau Dodge. by Hugo Cardenas. Art and animations at: Takayuuki.deviantart.com and Youtube