Get Your Paws on These Kitty-Themed Games Right Meow - Nerdist

Get Your Paws on These Kitty-Themed Games Right Meow

We’re not kitten you, there’s practically a meow-tain of cat-themed tabletop games out there. With card games, dice games, games with miniature cat game pieces, and of course Exploding Kittens, there are almost too many cat games to check meowt.

Geek & Sundry has you covered, of course! Here are our picks for some of the best games with cattitude.

And we a-paw-olgize for all the cat puns. Fur real.

Collect all the cats you can in this card game from Fireside Games. The more cats you encourage to come to your home, the more points you score. Play a card on your turn to lure cats or steal them from your neighbors. You can also play a card to protect your kitties from being stolen or affect the other players.

Best of all, Here, Kitty, Kitty! comes with 40 miniature cat pieces so cute that you really will want to collect all of them. 3-6 players can take pawt in this family-friendly game. 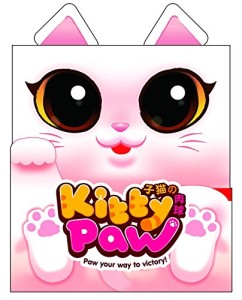 Cards are sorted by difficulty, so you can scale the game for the age of the players, which is great since kids are irresistibly drawn to the supe-paw-cute tiles. 1-4 players can join the Kitty Paw-ty.

Of all the cat games on the list, this card game from Gamewright is the best suited for parents and kids to play together. Rat-a-Tat-Cat challenges players to draw and discard cards to get the lowest cumulative score, not the highest. But with some or all of the cards in your hand facing down, you’ll have to remember which cards are where so you don’t accidentally get rid of your low numbered cards. That would be a cat-tastophe.

Math and memory skills are the obvious educational benefits for kids, plus a little bit of strategy, making Rat-a-Tat-Cat a purrfect pick for family game night.

2-6 players experiment and test hypotheses in this unique bluffing card game. Where else can you play a card named “Heisenberg Uncertainty Principle”? In Schrödinger’s Cats, you become a cat physicist like Albert Felinestein or Neil deGrasse Tabby, each with a different special ability.

During each round, players bid on the possible state of the cats in the boxes: alive, dead, or nonexistent (an empty box) based on the cards in their hands. You can bluff, but be careful. Other players can keep track of the cards in play and call to see the cards in your hand. If you’re caught bluffing, you’ll be meowt of the game. Play your special ability, and the numbers right, and you’ll win the the round.

Based on the hit series on MewTube, er, YouTube, Simon’s Cat is a card game from Steve Jackson Games. 3-6 players choose and play cards from their decks to get into typical cat mischief.

Play a card that matches the color or number of the card in the pile, but if you don’t have a matching card, you pick up the entire pile–and if you have the most cards at the end of the round, you get blamed for the whole mess. The expressive and hilarious illustrations, straight from Simon’s Cat, pack this card game with purrrr-sonality.

Do you have the purrfect cat game to add to the list? Share it in the comments!