Role-playing games are all about creativity, compromise, and carefully avoiding becoming a murder hobo. When we sit down to our tables, dice out, papers organized, snacks assembled, our imaginations can accomplish amazing things. Sometimes those things involve liberating a kingdom from the clutches of an evil lich (is there any other kind of lich?), and sometimes they involve drinking a magical potion that lets you scry out of your own excrement. Most of the time, though, you and a bunch of friends are pretending to be other people from another world, doing and saying some crazy stuff. If you’ve ever caught yourself in those moments, you can take note of some of the weirder things you’ve said in or out of character and turn them into internet gold.

People on Reddit and Imgur have set about creating image macros, taking quotes from their various RPG adventures and combining them with official D&D art—and the results are simply hilarious. You can check out posts like these from a year ago or from this year, and they’re always guaranteed to be entertaining.

The Out of Context D&D Quotes Tumblr page posts regularly and takes submissions. Scrolling through page after page, you can read all about the kind of nonsense that gamers from all around the world are getting up to without having to deal with all that pesky story or character background. We picked out our favorite Out of Context D&D Quotes posts in recent months and decided to continue the beautiful tradition of adding text to Wizards of the Coast‘s often very serious official artwork. 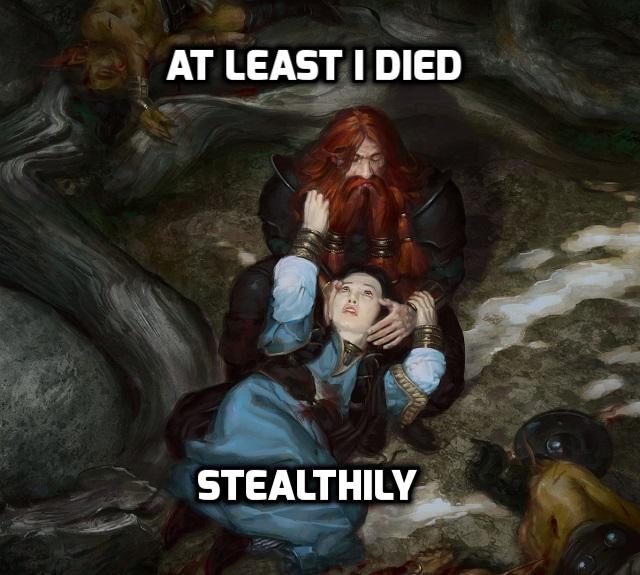 That quote gives me nightmares of a certain vampire and necromancer couple in a certain room after meeting a certain adventuring party in Emon. Vax knows what I’m talking about. Stop sneaking off on your own, man.

Peruse our gallery of silly image macros below, and check out the Out of Context D&D Quotes Tumblr for more magical moments and even less context.

What are some of the best lines from your campaigns that, when taken out of context, make others super uncomfortable or otherwise amuse them? List some of your favorites in the comments!

All images credited to: Wizards of the Coast