Dungeons & Dragons 5th Edition launched in 2014, and so far, our adventures have brought us a Tyranny of Dragons, encounters with Elemental Evil, and had us face a Rage of Demons. Storm King’s Thunder is set to roll across the skies of D&D players everywhere soon, marking the fourth chapter of the D&D 5E storyline. Here’s a bit of history through those previous storyline chapters to prepare us for the next installment!

Tyranny of Dragons was the first D&D 5E storyline, launched in August 2014, and included two official adventure modules: Hoard of the Dragon Queen, and Rise of Tiamat.

In Tyranny of Dragons, players were pitted against the Cult of the Dragon, whose plan was to free the Queen of Evil Dragons, Tiamat, from her prison in the Nine Hells plane. Lord Dagult Neverember of Neverwinter petitioned the players to seek and recover five ancient dragon masks from five Cult of the Dragon leaders, in an effort to put an end to the Cult and its plan, and keep Tiamat from escaping. 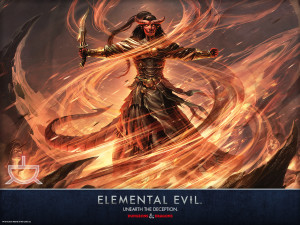 The Elemental Evil storyline launched in March 2015 and included the Princes of the Apocalypse module.

Players were again faced with cults, four of them this time, with each one representing one of the four elements: the Cult of the Crushing Wave, the Cult of the Eternal Flame, the Cult of the Black Earth, and the Cult of the Howling Hatred. These cults were using devastation orbs to unleash elemental disasters across Faerûn, while also constructing an underground temple dedicated to a being known as the Elder Elemental Eye. Players had to confront and defeat the prophet leaders of each cult and destroy the temple to abolish the cults for good.

Rage of Demons launched in fall 2015 and included the Out of the Abyss adventure module.

All along the Sword Coast, rumors of the return of powerful demon lords such as Demogorgon, Graz’zt, and Orcus were being shared by an increasingly fearful people. Players had to venture into the Underdark to seek any truth to the rumors, and possibly encounter the demon lords in person. Legendary drow Drizzt Do’Urden accompanied the players, and lent his combat skill and intellect to aid the players’ investigations. 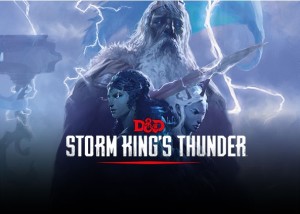 Storm King’s Thunder is next in the D&D 5E storyline, and involves players investigating the sudden menacing invasion of the giant races (hill, fire, frost, and cloud) in an effort to keep them from destroying the Sword Coast. Players will also be introduced to a new magic system, rune magic, an ancient magic known only to the giant races.

If you’re looking for info on Storm King’s Thunder, click over and read James Haeck’s review and how well it plays on the Roll20 virtual tabletop. Also, be sure to watch Nerdist’s Force Grey: Giant Hunters, which features the series, featuring Matthew Mercer as the Dungeon Master.

Have you played through much or all of the D&D 5E storyline chapters? Which adventures are your favorite? And tell us what you’re most looking forward to in Storm King’s Thunder in the Comments below!