When it comes to the big guns of sci-fi there’s almost none bigger than the Star Trek franchise. Beaming up on our television screens long before the heyday of video games, we’ve been lucky enough to see some great and fun interpretations of Trek universe over the years, from home computers to the arcade to home computers again to consoles.

Boldly go with us as set phasers to “stunned” as we take a look back at some of the highlights and notable additions to the video and computer game section of the Star Trek Universe. (And we promise, that is the last of our admittedly lame and forced Trek puns.)

The original series had only been off the air a few years when this particular iteration of Star Trek hit the scene. Debuting in 1971 and designed by Mike Mayfield, the game calculates resources and inventory as you go on the offensive against Klingon attackers. Of course you had to use nearly every last bit of your imagination to even come close to the original show, but in the early 70s this game was considered cutting edge. 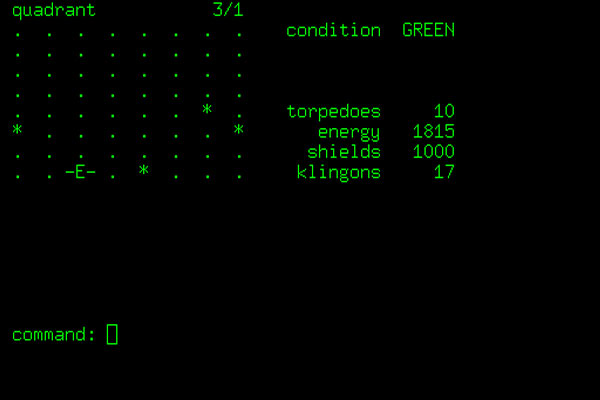 The Operations center was one of the first graphical representations of combat aboard the Enterprise. Tasked with protecting various sectors of Federation Space, the player must take on 3D polygram versions of Klingon ships while also protecting Starbases.

This very well may be the greatest Star Trek game of them all.  Along with its sequel Judgement Rites, 25th Anniversary captures all the best parts about the original show, right down to the subject matter of the game’s episodes. The original version of the game was text dialogue but an updated release included the actual voices of the big three of the Enterprise, Shatner, Nimoy, and DeForesst Kelly.

Star Trek – The Next Generation: A Final Unity

Final Unity was similar in gameplay to 25th Anniversary and Judgement Rites, however it starred the cast of The Next Generation. Voiced by the actual actors from the show, including Patrick Stewart and Jonathan Frakes. It included a nifty 3D modeled opening which today looks quite quaint but at the time was simply mindblowing.

Think “Star Trek meets Myst” and you’ll know what to expect if you ever come across Harbinger. In it, you are tasked to scour the station as a stand-in character sent to investigate. Once again voiced by the stars of the show the level of authenticity allowed you to experience Deep Space Nine like never before.

Take the helm of a number of different star ships as you engage in battles and skirmishes with some of the Federation’s greatest threats. Command was one of the first times the entire catalog of starships.

For some this was the best interpretation of the much maligned Voyager. A first person shooter, as the title suggests the elite force is a special unit aboard Voyager tasked with Hazard missions. This game was well received and was a fun exploration of the Voyager side of the Star Trek Universe.

The new Star Trek movies are known for big action which one would think lends itself to an even more involved game experience. On their way to video game glory they’ve unfortunately made a pit stop in the neutral zone.  (Sorry, we lied about no more puns.) D-A-C was a noble effort but didn’t quite get to the finish line in regards to winning our hearts. That said, the future of Star Trek games has the potential to be a rich one, but they just may have to revisit past endeavors to inspire themselves and give us gamers what we really want.

What are some of your favorite Star Trek games?  Let us know in the comments!